Jabotinsky's Role, and the Jewish Legion's, in Securing the Balfour Declaration

The Jewish Legion was not just a military force but an instrument of Zionist diplomacy—a symbolic resurrection of the Jewish national spirit. 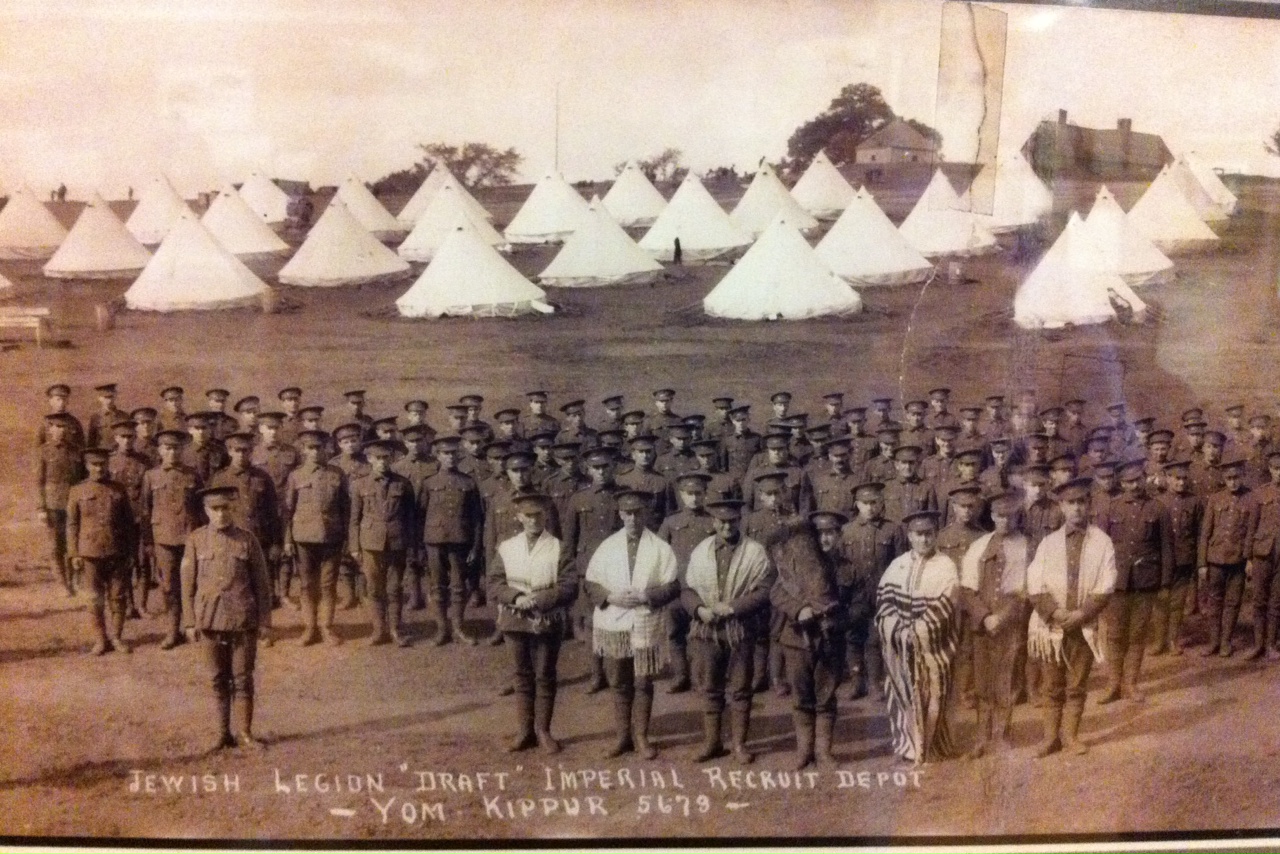 The 39th Battalion of the Jewish Legion at Fort Edward in 1918. Wikipedia.

Response
Colin Shindler
About the author


Colin Shindler is an emeritus professor at SOAS, University of London. His latest book, The Hebrew Republic: Israel’s Return to History, has just been published by Rowman & Littlefield.

Martin Kramer has rightly attempted to resurrect Nahum Sokolow’s role in the Zionist diplomacy that led up to the Balfour Declaration. He demonstrates clearly the incremental progress of that diplomacy during World War I, and how the Zionist diplomats ensured that political significance was attached to each new step, no matter how seemingly insignificant. He also shows that Britain did not act in isolation but, working together with the Zionists, saw to it that its other wartime allies were on board.

The Zionist slogan of constructing a community of Jews in Palestine “dunam by dunam” can thus be seen to have applied to other sectors of Zionist endeavor as well. In this connection, Kramer points out how, in their talks with the British, the early Zionists made certain that everything was put down in writing. “Perfidious Albion” had a long record of making quiet verbal pledges and promises that afterward might be explained away.

In Kramer’s telling, Nahum Sokolow was a key figure in this entire process. His crucial role has indeed been “forgotten” (as Kramer’s title has it), and no academic biography of him has yet appeared. The writing of history, however, is a complex and selective process, and a telling in the present can often neglect or underplay the role of other central figures who were involved. Thus, only once in Kramer’s account does the name of the prominent Zionist leader Vladimir (Zeev) Jabotinsky appear, and then only in Jabotinsky’s response to a December 1917 letter from the Austrian journalist Yaakov Landau.

Landau had cited an article in a Jewish paper in the Hague that pointedly mentioned the role of Sokolow in laying the basis for the just-issued Balfour Declaration. In replying, Jabotinsky wrote sharply that Chaim Weizmann was solely responsible for the declaration; Sokolow’s role was hardly acknowledged. Kramer quotes Jabotinsky’s unequivocal words: “the declaration is the personal achievement of one man alone: Dr. Chaim Weizmann.” Moreover, a year earlier, writing to the German Jewish journalist Felix Lazar Pinkus, Jabotinsky had bluntly stated his opinion that Sokolow was not an activist. He was “lacking,” whereas Weizmann, by contrast, “does good diplomatic work.”

At this time, Jabotinsky was a strong ally of Weizmann, specifically when it came to promoting his belief in a “Jewish Legion” that would function as a unit of the British army in the Middle East—an initiative that Jabotinsky considered to be at least as important diplomatically as militarily. But this clearly suggests that historical credit for the Balfour Declaration might well be claimed by even more Zionist leaders than Martin Kramer depicts. If Sokolow was significant, why not Jabotinsky as well? Why omit Jabotinsky?

Following Turkey’s entry into the war in November 1914, Jabotinsky had gambled that Britain and its allies would in the end prevail against the Ottomans. At the time, most Zionist leaders preferred strict non-involvement between the two contending sides, and the headquarters of the movement moved to neutral Scandinavia. Jabotinsky, however, predicted correctly that the British would invade Palestine from their base in Egypt, and to him it was of the utmost importance that an armed Jewish force be part and parcel of that invasion and be present in the Middle East when hostilities ceased.

His first attempt to create a Jewish military force was frustrated by the British, who would accept only a lowly body of muleteers. At Gallipoli, the Zion Mule Corps may have only carried bully beef and bullets—and been treated badly by the British—but its very existence would become widely known and open many doors to government, thus facilitating Jabotinsky’s ultimately successful campaign for a fully-fledged Jewish battalion. The Legion’s own real significance lay not in its constituting a small and almost irrelevant fighting force at the tail end of the war but in its symbolic resurrection of a Jewish national spirit after two millennia of exile.

Kramer mentions a meeting in February 1917 between Zionist leaders, including Sokolow, and the British negotiator Sir Mark Sykes. The latter is well-known today as one of the authors of the “Sykes-Picot” agreement on a prospective postwar division of the Middle East between Britain and France. That secret agreement was not known to the Zionists at the time of the meeting. Sykes’s sudden enthusiasm for Zionism may well have been an acknowledgement that the Zionists could be played as a chess piece in the imperial Great Game. Moreover, the new British prime minister, David Lloyd George, was decidedly more sympathetic toward the Zionist cause than his predecessor had been. Indeed, at the very same meeting, though unmentioned by Kramer, Sykes also gave the green light, ostensibly on behalf of the Lloyd George government, to institute a Jewish Legion.

What is important to understand in this context is that, for Jabotinsky, the Jewish Legion was not just a military force but an instrument of Zionist diplomacy—diplomacy, that is to say, by other and less apparent means. That is precisely how, in 1928, he would put it in his book, The Story of the Jewish Legion:

How could the Zionist movement express itself in those war years? It was broken and paralyzed and was, by its nature, outside the narrow horizons of a warring world with its war governments. Only one manifestation of Zionist will was able to break through to this horizon, to show that Zionism was alive and prepared for sacrifice, to compel ministers and ambassadors, and—most important of all—journalists to treat the striving of the Jewish people for its own country as a matter of urgent reality, as something which could not be postponed, which had to be given an immediate “yes” or “no”—and this was the Legion movement.

Of course, by the time he was writing The Story of the Jewish Legion in 1928, Jabotinsky had broken with the Zionist Organization and become an opponent of Weizmann, whom he deemed too conciliatory. Proclaiming a return to Herzlian Zionism, he had founded his own rival Revisionist movement. Thus, in the book, far from giving sole credit for the declaration to Weizmann as he had done a decade earlier, he now asserted not only that “Balfour Declarations are not given to individuals” but that “half the Balfour Declaration belongs to the Legion.” In fact, with the exception of Weizmann, most Zionist leaders in 1915, including Nahum Sokolow, were strongly opposed to the notion of a Jewish Legion. Even Lord Rothschild, to whom the Balfour Declaration would be addressed, was ambivalent.

In brief, Zionist diplomacy during World War I manifested itself in more than one form, and more than one of those manifestations played a part in securing the declaration, as did more than one or two of Zionism’s leading personalities. In addition, there was the element of sheer luck. In 1917, a window of great opportunity opened—but it did not stay open for long. As Kramer reminds us, neither Lord Curzon, who succeeded Arthur Balfour as British foreign minister, nor Philippe Berthelot, who came after Stephen Pichon in France, was a “lover of Zion.” For his part, the intractable Lord Kitchener, the British minister of war, had resolutely opposed the formation of a Jewish Legion. But then Kitchener perished in 1916 when the HMS Hampshire was sunk by a German U-boat, and by the end of that year his successor, the Welshman David Lloyd George, would become prime minister—the same Lloyd George who many years later would explain his affection for Zionism in these words: “I heard of Jezreel and Esdraelon, of Carmel and of Zion, before I knew of the existence in my own land of the Valley of Glamorgan or of Plinlimmon.”

Human nature favors simple scenarios, especially when it comes to history. Rather than going through the laborious process of examining all of the evidence and coming to a more nuanced viewpoint, succeeding generations who did not live through a particular series of events are often selective in depicting them. Nostalgia, romanticism, and the need for heroic figures tailored to contemporary ideals can play a part as well.

Martin Kramer rightly infers that Nahum Sokolow has been unfairly forgotten today—perhaps because, as Jabotinsky implied, he was not an “activist” in the public sense whereas both Jabotinsky and Weizmann were hardly reticent in putting themselves forward. In fact, none of those who played the great game of Zionist diplomacy in those years was a god or a demigod. And yet, despite their human flaws and failings, they laid the sturdy basis for the legitimization and international recognition of Zionism and thereby, as Kramer rightly argues, prepared the ground for the UN Resolution of November 1947 and the rise of a Hebrew republic in the land of Israel.

Jabotinsky's Role, and the Jewish Legion's, in Securing the Balfour Declaration
1. Essay

The Forgotten Truth about the Balfour Declaration
2. Response

How the Balfour Declaration Became Part of International Law
3. Response

How Gentile Zionism Affected the Statesmen Behind the Balfour Declaration
5. Last Word