Ancient Jewish history, with which he was well acquainted, showed what could happen in the absence of a central military command. He made sure it wouldn’t happen again. 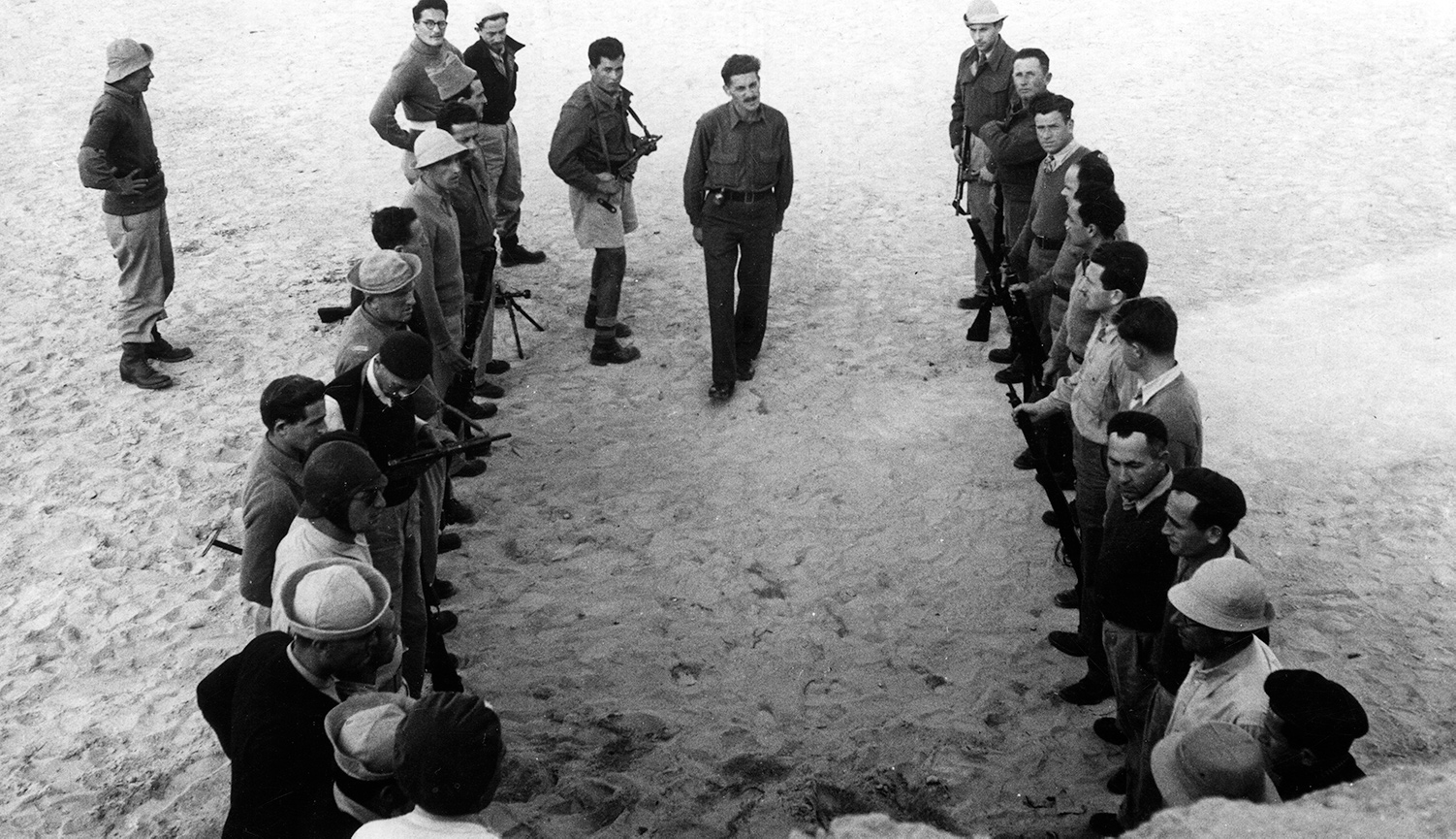 Response
Efraim Inbar
About the author


Efraim Inbar is president of the Jerusalem Institute for Strategy and Security (JISS).

In retrospect, David Ben-Gurion made two fateful decisions in 1948: to declare statehood, and to establish the state’s central authority over the instruments of armed force. In his latest essay in Mosaic, Martin Kramer duly focuses on the May 12, 1948 meeting of ten members of the People’s Administration, Israel’s cabinet-in-waiting, under Ben-Gurion’s chairmanship.

Many historians have seen this meeting as crucial for the first decision: whether, on the one hand, to heed the U.S. proposal for a three-month ceasefire in the already ongoing conflict between Palestinian Arabs and the Haganah, the pre-independence militia of the yishuv, or, on the other hand, to press forward with the plan to declare statehood two days later.

Debunking this received version, which portrays the debate at the May 12 meeting as a close call, was one of Kramer’s aims in a previous essay in Mosaic. There he showed how, propelled by Ben-Gurion’s determined leadership, a consensus formed to reject the American proposal and declare independence immediately. Indeed, given the various political factors at work, and the high expectations and demands being voiced by, in Kramer’s words, “the Jewish public and the Hebrew press,” that conclusion was all but foregone: “there was nothing to decide.”

It’s worth pausing here to ponder one extraordinary fact that, surprisingly, drew no comment from Kramer in that prior essay. As early as World War II, Ben-Gurion had been urging the Jewish Agency, the operational arm of the World Zionist Organization, to adopt a pro-American rather than a pro-British orientation for the state-in-formation. Yet, on May 12, 1948, with the embryonic state in a weak and vulnerable position, he did not hesitate to go against Washington’s strongly urged proposal for a three-month delay.

That is another mark of Ben-Gurion’s historical stature. Great leaders take great gambles. In 1948, despite military inferiority and despite the wishes of a superpower, Ben-Gurion had the courage, the confidence, and the tenacity to lead the Jewish people to independence after a hiatus of 2,000 years. Later on, as the prime minister of the state of Israel, Ben-Gurion was again, by and large, quite sensitive to American requests—yet, again, unwilling to bow to American desires on all issues. The best-known example is the decision to resist the Kennedy administration’s pressure to sign the Nonproliferation Treaty and instead to build up Israel’s nuclear infrastructure.

To return to the new essay: here, instead of dwelling on the bold decision to press forward with the declaration despite the Americans (and despite doubts within the Zionist leadership), Kramer begins by drawing our attention to the moment in the May 12 meeting when Ben-Gurion brought in his two senior military experts, Yigael Yadin and Yisrael Galili, to evaluate the odds in a looming military confrontation of a different and greatly more menacing kind—no longer with the Palestinian Arabs, who by then had been largely defeated, but with the armies of five Arab states already gathered on the borders of the prospective new state and prepared to invade en masse.

The report of the two military experts, to the effect that the odds in Israel’s favor stood at no more than fifty-fifty, gave the assembled members quite a fright. But this, Kramer proceeds to argue, was exactly the response that Ben-Gurion wished to elicit.

Why? In Kramer’s reading, Ben-Gurion, convinced that the Haganah “wasn’t up to the next, greatly expanded phase of the war,” aimed to redress the situation by ensuring three things: total civilian control over the conduct of the war; full unification of the various military forces at the nascent state’s disposal—including not only the various militia-type units of the Haganah but also the Palmaḥ, its elite strike force, and the smaller right-wing Irgun—into a disciplined professional army. Additionally, he aimed to secure for himself the defense portfolio in the new government. At the May 12 meeting, having prepared the ground by dislodging anyone’s expectations of a quick or easy victory, Ben-Gurion threatened resignation if his conditions were not met.

As is well known, he would shortly become both prime minister and defense minister of the state of Israel, and the decree establishing the IDF (May 26, 1948) would conform with his tenets and conditions. But, practically speaking, it was no easy task to exert control over the paramilitary forces that were to be integrated into the Israel Defense Forces (IDF). In one instance, involving the Irgun ship Altalena, subordination could be assured only through force and live fire. In another, Ben-Gurion’s grip on the IDF had to be secured through the disbandment of the high command of the Palmaḥ.

In the end, Israel won the war.

Beyond successfully conferring on a central authority the ability to conduct effective operations during the 1948-49—and forever after—Ben-Gurion’s adamant insistence on centralized command had ramifications that Kramer doesn’t go into but with which we can conclude.

Max Weber famously defined the key attribute of a state, any state, in these words: “a state is a human community that [successfully] claims the monopoly of the legitimate use of physical force within a given territory” (emphasis in the original). Although we have no similar statement by Ben-Gurion, it seems that, at least intuitively, he understood the challenge and responsibilities of statehood itself in similar terms. The fact that other leaders of national liberation movements have not always adopted such a perspective—Yasir Arafat being one salient case in point—adds still greater luster to Ben-Gurion’s stature as founder and statesman.

Then, too, there is the tacit social contract that lends legitimacy to states, based on a trade-off in which individuals and small groups give up the right to bear arms and defend themselves in exchange for the state’s commitment to provide for their security. Indeed, monopoly over the use of force is at the heart of the modern state. The absence of such a monopoly undermines the foundations of the social contract and leads to failed states—as is once again abundantly shown by political reality in much if not most of the Middle East till this day.

Jewish history itself, with which Ben-Gurion was well acquainted, also provides tragic examples of what can happen in the absence of central military command. The fall of the Second Temple in 70 CE might be attributed in part to the presence of multiple Zealot militias fighting the Romans in an uncoordinated way.

Finally, Ben-Gurion used the IDF as an instrument for nation-building. Only a unified army, subordinate to central authority, could perform that task. The IDF was where Jews of different national origins and social classes mingled and became Israelis. In time, it also adopted additional roles in the areas of education, agriculture, immigrant absorption, and emergency response, and became the most respected institution in Israel. And, within its own ranks, it allowed for and facilitated upward social mobility; Ben-Gurion frequently expressed the wish to see a Yemenite Jew serving as chief of staff.

Using the bricks at his disposal, Ben-Gurion built the IDF into a highly effective military force that simultaneously became the ultimate melting pot for Jews returning to their homeland from all corners of the earth. Historians can debate the role played in the ultimate realization of that vision by a single meeting on May 12, 1948. What is beyond debate is that, at its creation, Israel was extraordinarily lucky to have David Ben-Gurion at the forefront of its leadership.

How Ben-Gurion Ensured a Government Monopoly on the Use of Force
1. Essay

Ben-Gurion's Army: How the IDF Came into Being (and Almost Didn’t)
2. Response

Ben-Gurion's Fight over Israel's Military Was Not Just about Its Preparedness
3. Response