How Anti-Discrimination Became a Religion, and What It Means for Judaism

Currently, Jews are among the most popular religious groups in the U.S. As the liberal left’s commitment to religious liberty fades, how long will this consensus last? 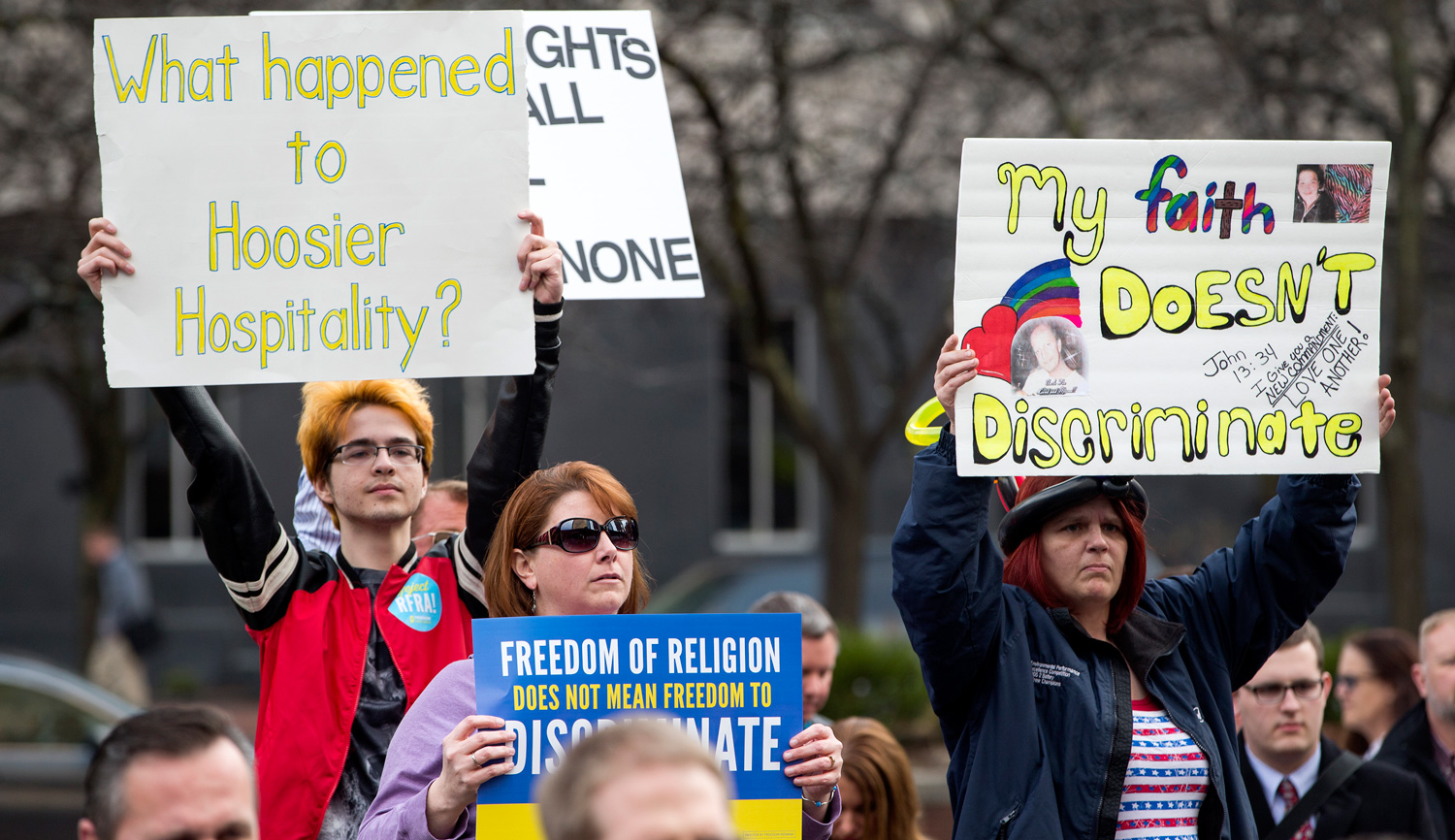 
David E. Bernstein is GMU Foundation professor at the Antonin Scalia Law  School, George Mason University. He blogs for the Volokh Conspiracy at the Washington Post.

Richard Samuelson’s essay, “Who’s Afraid of Religious Liberty?,” offers a sobering look at how religious liberty has come to be devalued by American liberals, especially when it conflicts with the liberal attachment to anti-discrimination law. Progressives see adherence to many traditional religious teachings, particular those concerning sexual morality and the status of women, as mere bigotry to be stamped out by government authorities.

In what follows, I’ll address three issues raised by the essay. How did we get here? Is the situation as dire as Samuelson suggests? And, finally, what does it all mean for the future of Jews and Judaism in the United States?

There are several reasons why traditional religious perspectives are increasingly losing out to legal challenges mounted under the rubric of anti-discrimination. The first is the gradual transformation of the primary rationale for anti-discrimination laws. These started as part of an effort to redress the exclusion of African-Americans and others from mainstream American life. Because of that relatively defined goal, the framers of early civil-rights legislation, as Samuelson notes, were content to provide exemptions from its stringencies for minor economic players, such as landlords who were living on their own property.

Over time, however, Americans gravitated to the notion that discrimination, per se, is immoral and harmful and must be forcibly suppressed, even if the economic consequences are minimal or nonexistent. We have reached a point where, if even one out of hundreds of local wedding photographers declines for religious reasons to photograph a same-sex wedding, that lone photographer is seen by many to have committed a grave offense deserving of punishment.

Many secularists see adherence to longstanding moral teachings as compelling evidence of irrational animus. Secular liberals seem unable to discern why—unless out of a prejudiced hostility to women’s rights—a Catholic university should decline to provide its employees with insurance coverage for birth control. This failure of moral imagination is quite staggering, especially given that progressives consider themselves to be exceptionally open-minded and tolerant of diversity.

Still another, related factor in the rout of religious liberty is the unwillingness of the American Civil Liberties Union (ACLU) and other one-time supporters of the free exercise of religion to defend the rights of traditionalist Christians lest, by doing so, they fall on the wrong side of the culture wars. It was one thing for the ACLU and like-minded groups to have historically defended politically inconsequential minorities like peyote-smoking Indians and Sabbatarians (as well as Orthodox Jews) whose free-exercise rights were threatened by the mainstream Protestant majority. It’s quite another thing today to defend evangelical Christians when they object to aspects of modern anti-discrimination law.

Over the last 30 years, the ACLU has gone from being a relatively small organization whose membership was composed largely of committed civil libertarians to a mass-membership organization dependent on the good will of political liberals who in turn think of evangelical Christians as their political and cultural enemies. This has caused the ACLU to give short shrift to its once proud tradition of defending the free exercise of religion, a shift exemplified by the organization’s changing position on the Religious Freedom Restoration Act (RFRA).

That 1993 act, which, as Samuelson points out, was passed almost unanimously by Congress, responded to a Supreme Court opinion written by none other than the late Justice Antonin Scalia. Scalia had taken the firm position, traditionally associated with conservatives, that free-exercise rights do not include the right to disobey general laws that do not themselves target religion. Among those persuading Congress to pass RFRA was the ACLU, along with most major civil-liberties and religious groups. (Ironically, some conservative groups had reservations about the act.) Once it became clear, however, that the primary beneficiaries of RFRA were not going to be the aforementioned peyote-smokers and Sabbatarians but religious Christians seeking to repel the advance of secular, progressive values into their lives, the ACLU and many other left-leaning groups and individuals became strong opponents of religious-freedom laws at both the federal and, later, the state level.

Indeed, in a remarkable spectacle, governors of states that in the 1990s had passed still-extant religious-freedom laws are now boycotting states that have passed similar or almost identical laws in the 2010s. Thus, in 2015, the Connecticut governor Dan Malloy signed an executive order banning state travel to Indiana on account of that state’s newly passed Religious Freedom Restoration Act, which actually afforded narrower protection to religious liberty than does Connecticut’s RFRA.

The reason for such contortions: religious freedom is now seen as code for “discrimination against sexual minorities.” As Louise Melling, the ACLU’s deputy legal director, has put it, RFRA needs to be limited (she uses the term “amended”) “so that it cannot be used as a defense for discrimination.” More broadly, she argues, “religious liberty doesn’t mean the right to discriminate.” Actually, however, it does mean the right to discriminate, or at least it can—unless one were to adopt the old Soviet line that religious freedom means you are free to believe whatever you want so long as you don’t act on those beliefs.

Are things as bad as Samuelson suggests they are? Yes, with one major caveat: the Supreme Court’s unanimous affirmation five years ago of the so-called ministerial exception.

Until Barack Obama was elected president, federal courts had consistently, indeed unanimously, held that the First Amendment’s religion clauses protect the right of religious organizations to choose their religious staff free from the interference of secular law. This became known as the ministerial exception. Then, in a 2011 case called Hosanna-Tabor Evangelical Lutheran Church and School v. EEOC, the Obama administration launched a frontal assault on the exception, which had never been directly addressed before by the Supreme Court. In the event, the Court ruled 9-0 that the exception was valid. Moreover, it applied the doctrine more strictly than had many lower courts, holding, for instance, that for these purposes a teacher in a Christian school who had mostly secular duties was a “minister.”

The Court ruling has put significant limits on the ability of anti-discrimination principles to impinge on religious organizations. Still, while Hosanna-Tabor was a smashing victory for religious freedom, the very willingness of the Justice Department to adopt so radical (and predictably futile) a position strongly suggests how low the respect for religious liberty has sunk in certain mainstream progressive circles.

What, then, does this mean for the future of Jews and Judaism in the United States? Currently, Jews are among the most popular religious groups in the United States, and anti-Semitism is at historic lows—even though, as Samuelson documents, Jews still suffer by far the most hate crimes of any religious group. Indeed, the general fondness for Jews ranges across the political spectrum, from left-wing atheists who admire the Jewish contribution to social-justice movements to evangelical Christians who believe that the Bible commands them to protect the state of Israel and the Jewish people.

The question is how long this consensus will hold. If present demographic trends continue, in the relatively near future most Americans of Jewish ancestry will no longer have any formal ties to the organized Jewish community. True, in common with Irish, Italian, and other ethnic groups, many will no doubt continue to display a vague nostalgic affection for their ethnic origins, but their specifically Jewish heritage will not otherwise significantly affect their lives. As for those who remain active members of the Jewish community, they will be divided among a large but shrinking cohort of mostly Reform and other religiously liberal Jews; a smaller but vigorous group of modern and centrist Orthodox Jews joined by remnants of the rapidly declining Conservative movement; and a large and rapidly growing group of ḥaredi or “ultra-Orthodox” Jews.

At some point, indeed, this last-named group, whose current rate of per-year population growth stands at an astonishing 5.5-percent, will form a significant element of the public “face” of American Jewry. The Jon Stewarts, Bernie Sanderses, and Ralph Laurens of the world will compete in the minds of Americans with various ultra-conservative rabbis and community leaders. Some of these ḥaredi notables may demand (or may be perceived as demanding) housing and other subsidies from the government for their followers who barely participate in the general civic life of the country. This is unlikely to ingratiate them with American conservatives, and it will provide fodder for “alt-right” anti-Semites.

But the greater threat comes from the left. Already hostile to traditional expressions of religious freedom, and to major religious movements like evangelical Christianity, the left is also widely hostile to smaller groups like the Mormons. In this case, the animus is directed not so much to the Mormons’ conservative lifestyle as to the recognition that the Mormon church and its congregants are a significant conservative force in American politics. That animus may come to seem minor when compared with the hostility directed at Ḥaredim as their population stretches from six to seven figures and they increasingly assert electoral and political power.

Much of that power will undoubtedly be exercised in the pursuit of parochial concerns, which will itself raise some hackles. But some of it will inevitably align with more general conservative positions and candidates. This could be especially problematic because, in leftist mythology, Jews are “supposed” to be secular and progressive types who, bearing residual memories of collective oppression, can reliably be depended on to answer the call of left-wing causes. On the far left, Jewish corporate existence is only justified, if at all, by the role of Jews as progressive oracles. Indeed, Jews in particular are expected to take up the Palestinian cause and, when they do not, are subjected to vicious racism of the sort that the left purports to be devoted to opposing.

Israel, meanwhile, presents a problem in itself. Orthodox Jews, whether officially Zionist or not, on average maintain far stronger cultural, familial, and religious ties to Israel than do other Jews. If hostility to Israel becomes a truly defining attribute of the American political left, as current trends suggest it will, this will constitute another ground for anti-Jewish ire. We have already seen previews in attacks on pro-Israel “neocons” in the Bush administration during the Iraq war and more recently in anti-Semitic manifestations of the BDS movement on campus.

In short, the left is still mostly at peace with the American Jewish community because the latter is predominantly irreligious, socially liberal, and politically progressive. A few decades from now, the majority of affiliated Jews may well be predominantly religious, socially conservative, and a significant “reactionary” force in politics, especially in New York where Ḥaredim are concentrated. This is unlikely to occur without a significant rise in anti-Jewish sentiment on the left, bringing with it potentially dire consequences for the community’s religious liberty. Nor, we can predict, is this anti-Jewish sentiment likely to be limited to Ḥaredim.

How Anti-Discrimination Became a Religion, and What It Means for Judaism
1. Essay

Who's Afraid of Religious Liberty?
3. Response

The Rise of the Secular Theocracy
4. Response

The Battle for Religious Liberty Will Be Won on the Field of Education
5. Last Word