Why Turkey Is No Partner for the United States 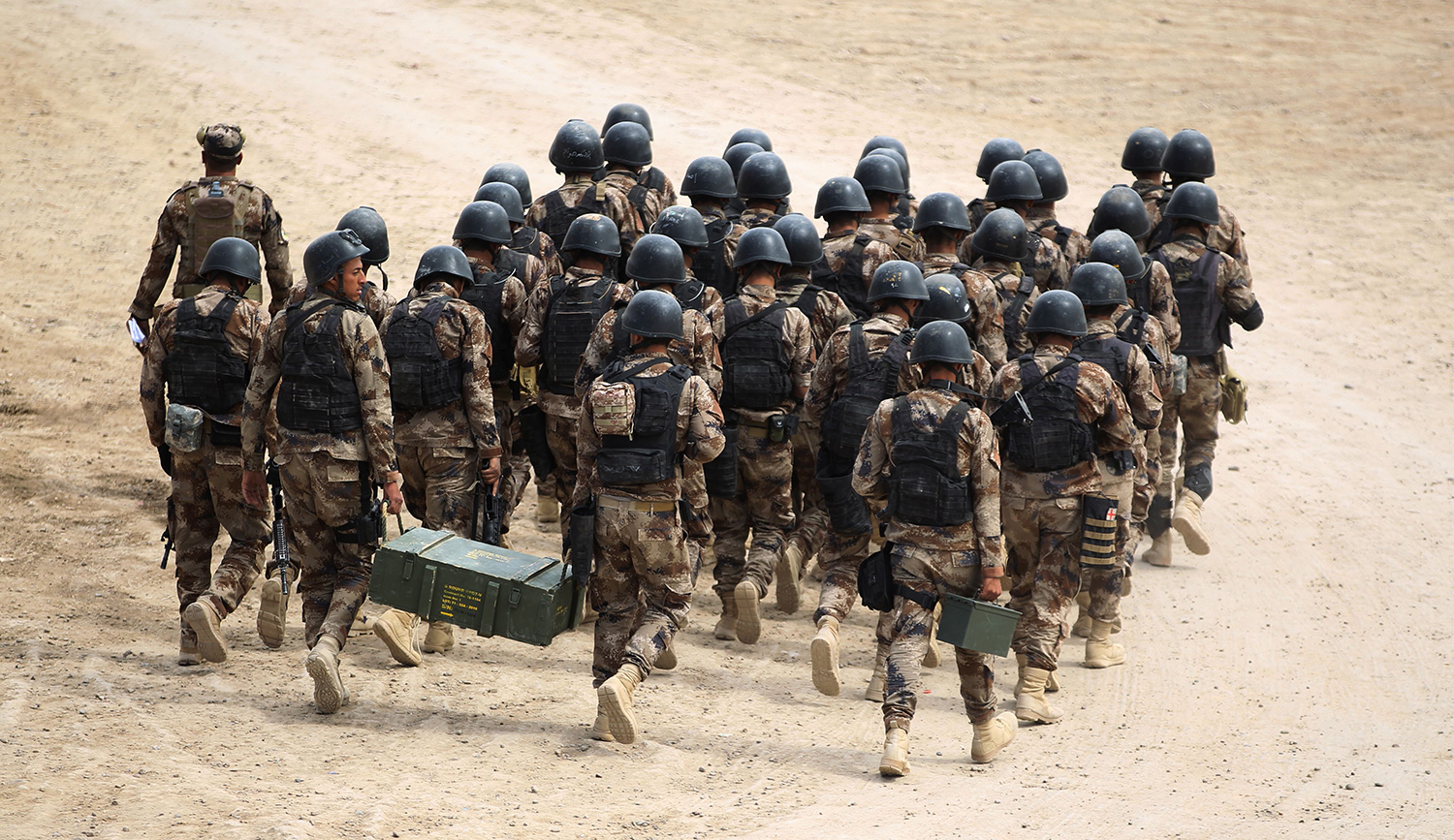 Members of the Iraqi Counter-Terrorism Service (CTS) take part in a training drill at the Special Forces Academy near Baghdad’s international airport on March 19, 2018 as Iraq marks the 15th anniversary of the U.S. invasion. AHMAD AL-RUBAYE/AFP/Getty Images.

Response
Steven A. Cook
About the author


Steven A. Cook is the Eni Enrico Matte senior fellow for Middle East and Africa Studies at the Council on Foreign Relations. His most recent book is False Dawn: Protest, Democracy, and Violence in the New Middle East (Oxford University Press, 2017).

There is a great deal to like about Michael Doran’s essay, “The Strategy Washington is Pursuing in the Middle East Is the Only Strategy Worth Pursuing.” His critique of ostensibly objective foreign-policy analysts and journalists is devastating. Much of what passes for analysis in Washington these days is merely reflexive anti-Trumpism. As Doran quite rightly indicates, many of the same people decrying the president’s decision to withdraw from Syria were similarly outraged when National Security Adviser John Bolton declared last September, “We’re not going to leave [Syria] as long as Iranian troops are outside Iranian borders, and that includes Iranian proxies and militias.”

The same could be said of the enormous attention devoted to the murder of the journalist Jamal Khashoggi. I differ with Doran on the larger question of Saudi Arabia (discussed below), but it is clear that part of the Washington outrage over the incident—terrible as it was—is partisan politics stemming from the president’s connections to, and support for, Crown Prince Mohamed bin Salman.

But Doran did not merely set out to write an article trolling Democrats, the elite media, and even a few Republicans for their inability to think clearly in the face of a president they loathe. Undoubtedly, he sought to make a big argument about U.S.-Middle East strategy during the Trump era. And yet, despite Doran’s elegant prose, his effort to provide an intellectual framework for the president’s haphazard and chaotic approach to the region falls flat. The result is Doran’s oddly muscular assertion that, even though President Trump intends to withdraw the United States from the Middle East, he and his administration will nevertheless provide unrivaled support to our allies.

Tell that to those allies. The Trump approach to the region is met there with a profound skepticism that, while not necessarily (or not yet) driving American allies into the arms of the Chinese or the Russians, is compelling regional leaders to take matters into their own hands. This is the same regional reaction we saw to President Obama’s determination to change U.S. relations with Iran. Throughout the Middle East, allies have gotten the message that they are on their own—a message that during the previous administration helped let loose the horrors of Syria and Iraq.

Doran clearly believes that the most significant challenge to U.S. interests in the region is presented by Iran. By contrast, an ally in his definition is “a state that supports the American security system.” There is nothing wrong with these self-evident assertions, but they bring into sharp relief Doran’s rather odd discussion of both Saudi Arabia and Turkey. Let’s take them one by one.

No one will dispute the fact that Saudi Arabia is an important country. Only irresponsible people believe that the United States should cut its ties with the Saudis over Jamal’s Khashoggi’s horrific murder or the humanitarian disaster in Yemen. Yet Doran’s prescription that Saudi Arabia deserves maximum support from the United States because it is critical in countering Iran resides only in the realm of aspiration. In the real world, the Saudis under the crown prince have pursued a range of policies that have been unhelpful, and in some cases have actually set back, American efforts to contain Iranian influence.

These cases include the November 2017 resignation, under Saudi compulsion, of Lebanon’s Prime Minister Saad Hariri because he was not anti-Iran enough. Although Hariri quickly returned to office, the entire episode, replete with a hostage-like video, drew him closer politically to Iran’s supporters in his own country. Then there was the ill-fated Saudi blockade of Qatar. While the Qataris are hardly innocent victims in the escapades and personal beefs of America’s allies in the Persian Gulf, the blockade created a fissure within the Gulf Cooperation Council that has complicated U.S. efforts to counter Iran.

Finally, there is the Saudi intervention in Yemen. It is true that the Saudis did not start the war in Yemen; they are fighting a group, the Houthis, which is part of the Zaydi sect of Shi’ism that Riyadh has fought, off and on, for many years (except when it supported them in the 1960s). The Houthis have appropriated the revolutionary rhetoric of Iran’s leaders, and the Saudis intervened to restore the internationally recognized government. Yet their poorly conceived and prosecuted intervention, combined with a communications strategy unworthy of the name, has provided the Houthi army with the upper hand both militarily and morally, all for a relatively modest investment by Tehran.

In short, if the Saudis were worried about the “Hizballah-ization” of Yemen, their own actions have advanced that unfortunate outcome. The only conclusion one can draw from Saudi Arabia’s Yemeni quagmire specifically, and from its new, more assertive foreign policy more generally, is that Riyadh is presently more of a liability in the confrontation with Iran than an asset.

Still, when it comes to Saudi Arabia, Doran at least sets out a position that is plausibly defensible. Anyone who entered the Oval Office in January 2017 would have immediately realized that after six years of turmoil in the Arab world, the Saudis were the only ones left standing. Regionally, moreover, they had company in the form of Turkey, which Doran identifies as another pillar of “the only strategy worth pursuing.”

But is Turkey such a pillar?

Although Doran’s discussion of American-Turkish ties is admirably eloquent, his analysis is inexplicably incoherent. He has let his obvious distaste for former President Barack Obama get in the way of the facts, in a way that can only bring a blush of pride to the faces of President Recep Tayyip Erdogan and ruling members of his Justice and Development party.

The Turkish government, rather than being a partner in countering Iranian influence around the region, has instead enabled it. Doran forgets that Turkey (along with Brazil) negotiated a separate nuclear deal with Iran in 2010 that was far more permissive than the 2015 Joint Comprehensive Plan of Action. He also overlooks the fact that in 2010 the Turks lobbied members of the UN Security Council to vote against sanctions on Iran.

Once those sanctions were put in place, moreover, Turkey’s state-controlled Halkbank played a pivotal role in helping Iran evade them. An executive of the bank, Mehmet Hakan Atilla, sits in a U.S. federal prison today for his role in the scheme, even as the Turkish government furiously lobbies the Trump administration not to levy huge fines on the bank and to halt an ongoing investigation being conducted by the U.S. attorney for the Southern District of New York. Since the re-imposition of U.S. sanctions on Iranian oil sales in November, the Turks have repeatedly requested a permanent waiver that will allow them to continue buying Iranian crude.

Doran maintains that it was the Obama administration’s relationship with the Syrian Kurdish People’s Protection Units (YPG), which is directly connected to the Turkish Kurdish terrorist organization PKK, that drove Turkey into the arms of Russia. Not quite.

In 2014, the Obama administration sought help from regional allies after Islamic State forces in Iraq overran the northern city of Mosul and a large swath of the country, thereby expanding the group’s realm in Iraq and Syria to an area equal to the size of Maryland. The Turkish leadership turned down the president’s plea, indicating that its priority was fighting Kurdish nationalism. The Turkish prime minister at the time, Ahmet Davutoglu, then proceeded to lecture U.S. officials that “Turkey would not embark on an adventure” without an “integrated strategy.”

For the Turkish government, that strategy would have required the American president to order an army to march on Damascus and engage in regime change. This was obviously not something that Barack Obama, the Pentagon, Congress, or many Americans wanted to do after the debacle of the Bush administration’s war in Iraq. In other words, the Obama administration turned to the YPG only as a result of Turkey’s reluctance to fight Islamic State.

To be sure, President Obama’s approach to the Middle East left much to be desired, especially on Turkey where the president, in the name of maintaining a strategic relationship, was too solicitous of Erdogan’s human-rights violations, anti-Americanism, anti-Semitism, and authoritarianism. And yet, for all of Doran’s disdain for Team Obama, he is essentially counseling the same thing, arguing that given the Iranian, Russian, and extremist challenges, Turkey is too important to alienate.

To any objective observer, however, it should be clear that from its efforts to complicate the fight against Islamic State by attacking the YPG, its coordination with extremist elements in Syria connected to al-Qaeda, its intention to purchase high-tech weaponry from Russia, and its track record of undermining U.S. policy toward Iran, Turkey decidedly does not support the “American security system” as Doran has defined it. Turkey may be a “treaty ally,” but it is no partner. It shares neither America’s interests nor its values. Doran’s advocacy of some type of reset with Ankara is in vain—mostly because the Turkish leadership (and public) isn’t interested.

This, indeed, is what makes Doran’s essay in general so confounding. Either he is advocating a policy akin to Obama’s—one that ostensibly aligns the United States with an adversary (in this case Turkey) at the expense of its allies (Israel, Saudi Arabia, the UAE, and Egypt)—or he is doing precisely what he most abhors in the current commentary about the Middle East: namely, engaging in partisan political advocacy in the guise of analysis.

The United States is certainly in need of an effective strategy in the Middle East. But the Trump administration doesn’t have one—no matter how hard Michael Doran tries to confer one on it.

Why Turkey Is No Partner for the United States
1. Essay

Is the American Withdrawal from Syria a Disaster, or an Opportunity, or Something Else?
5. Last Word