How Not to Help the Ultra-Orthodox

Liberal democracies like Israel need and depend on pious people. But they don’t need to— and shouldn’t—subsidize grown men for not working. 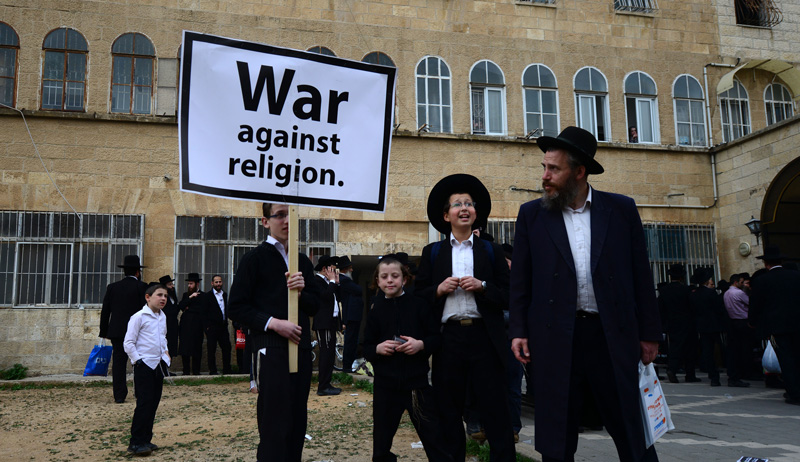 In the short space of 66 years, Israel has established a kind of polity never before seen in the Middle East, a polity that promises all citizens individual freedom and equality before the law. To an astonishing degree, particularly given the exceedingly dangerous neighborhood in which it dwells, the Jewish state has succeeded.

Not that the dangers, either from without or from within, should ever be discounted. Those from without (Iran, terrorism, the collapse of the Arab state system, stalemate with the Palestinian Authority, and so on) are well known; less so, those from within. Although the Israeli economy has made great strides in shaking off the remnants of its socialist roots, large sectors continue to underperform as government’s heavy hand impedes innovation and stifles competition. In addition, a restive Arab minority, approximately 20 percent of the citizenry, though generally aware that it enjoys the same freedoms enjoyed by Jewish Israelis—freedoms of which Arabs elsewhere in the Middle East can only dream—is increasingly impatient with the underfunding of its communities and its outsider status.

As if all that weren’t more than enough for any small, young liberal democracy to contend with, Aharon Ariel Lavi has clarified the critical internal challenge presented by Israel’s haredi or ultra-Orthodox community. As he writes in his provocatively titled essay, “Are the Ultra-Orthodox the Key to Israel’s Future?,” the haredim account for approximately 10-15 percent of Israel’s Jewish population and their political parties hold about 15 percent of the seats in the Knesset. Yet they are generally exempt from military service and, thanks to major state funding of their religious academies, many adult ultra-Orthodox men opt out of the labor force in favor of lifelong Torah study.

This arrangement is unjust and unsustainable, and cries out for reform. No modern economy—certainly not one that must also support a citizens’ army—can afford to subsidize the unemployment of a substantial and rapidly growing segment of the able-bodied population. Furthermore, the extraordinary entitlements and exemptions the ultra-Orthodox receive from the state generate resentment in their fellow citizens. Many secular Israelis regard the ultra-Orthodox as a grotesque aberration in a free and democratic society and would, if they could, pull the plug on all state support and abolish all special treatment.

Lavi’s achievement is to explain why the task of reform is urgent, but also why it is delicate. In doing so, he also sets forth constructive ideas of his own about how best to proceed.

For Lavi, who grew up secular in Israel and then chose the “demandingly pious way of life” of the ultra-Orthodox, the haredi community represents not only a philosophically legitimate response to modernity but also a legitimate Jewish response to Zionism. One may go still further. Beyond the obligation to tolerate diverse opinions and forms of life, liberal democracy has an interest in welcoming the pious. The spirit of freedom tends to undermine the moral foundations of liberal democracy by encouraging an insouciant disregard for limits and a thoughtless aversion to authority. Through the rigor of their lives, the pious provide a counterweight, a living testimony to the beliefs and practices that gave rise to the respect for the individual on which liberal democracy rests.

Israel, moreover, has a special interest in respecting the ultra-Orthodox because of their contribution to the preservation of a religious tradition that—however much it may embarrass and appall some secular Israelis to admit the fact, and however vehemently many 19th-century Orthodox leaders opposed Zionism as a political movement—provides one of the wellsprings that nourish the Zionist dream.

As an Israeli devoted simultaneously to the modern interpretation of liberal democracy, to the political interpretation of Zionism, and to the ultra-Orthodox interpretation of Judaism, Lavi seeks a judicious new accommodation. His eyes are wide open. He knows that the ultra-Orthodox in Israel are by their own intention discrete and insular; that much of their leadership wants them to remain isolated; and that the state’s perverse incentives collaborate to keep them so. As a soldier-citizen, he feels the unfairness involved when the state sanctions the refusal by by some to share the burden of national security. But as a hard-headed political analyst, he also understands that the military exemption, while divisive, is not the main impediment to greater participation by the ultra-Orthodox in the political community.

The crux of the matter, Lavi persuasively argues, is work and education. In this area, out of a sound liberal and democratic aversion to government coercion, and out of heartfelt religious solidarity with haredi ways, he seeks reforms that would enable the ultra-Orthodox to overcome their severe educational deficit in secular subjects and thereby become better integrated into the work force—but without requiring them to conform to the moral and material fashions of mainstream culture.

Education, as he argues, is crucial. English, math, and science should be introduced into haredi schools. To accommodate their distinctive way of life, however, these secular subjects should be taught in terms that build on rather than repudiate haredi customs and conventions.

In implementing his plan, Lavi highlights a “hidden ingredient” within Israeli civil society that offers an excellent opportunity for effecting a more general rapprochement between the ultra-Orthodox and other Israelis. This is the growing community of baalei teshuvah—“returnees,” or formerly secular Israelis like himself—who are uniquely well placed to create organizations, promote education, and engage in public debate designed to build bridges between the ultra-Orthodox world they have voluntarily joined and the secular world from which they came.

A leader in the quest to build those bridges, Lavi and his like-minded associates have already been active in developing unique curricula for haredi schools, forming communities inspired  by the mission of reform, and constructing networks of highly trained and qualified educators and others. Aiding their efforts are a number of other quiet but promising developments in haredi society like the increasing number of young ultra-Orthodox who are speaking Hebrew rather than Yiddish, who are volunteering for military service, and who are seeking higher education.

Lavi’s stress on the crucial importance of education is laudable, and his curricular ideas are both sound and necessary—but, I would suggest, not sufficient. Every liberal democracy has a right to insist that its young people acquire the basic knowledge necessary to support themselves and understand the issues concerning which they will be expected to cast ballots. In contemporary Israel—and not only there—necessary subjects include not just English, math, and science, but also history, literature, and the elementary principles of politics and economics.

And this is where government has a role to play. Lavi is rightly and admirably insistent on the virtues of his bottom-up approach, and understandably skittish about asking the government to do more. To my mind, though, none of this will succeed in the long run without decisive government action. But action is not synonymous with intervention. The called-for actions flow from the principle of limited government, without which liberal democracy cannot both secure the people’s rights and maintain the conditions for self-government.

In his justified aversion to government’s heavy hand, Lavi overlooks that government can exercise profound influence not just by doing more but by doing less. Government policy in Israel has induced a crippling dependence among the ultra-Orthodox. To foster independence, the state must slowly but surely decrease funding that rewards grown men for not working while making its remaining funding conditional on actions taken by the haredi community to bring their schools more in line with the minimum requirement of liberal democracy in Israel. This will permit what Tocqueville called the “art of association,” which has always flourished in the Jewish tradition, to come back to life among the ultra-Orthodox in Israel.

In brief, liberal democracy in Israel can strengthen itself both by removing the perverse incentives that encourage the ultra-Orthodox to opt out of work and by incorporating into the haredi school curriculum core subjects that will equip students to earn a living and enable them to appreciate the freedom and equality under law that make their rigorous piety possible. In the process, liberal democracy will also strengthen the ultra-Orthodox by impelling them to reestablish the habit of providing for their material needs without government assistance, a habit that has traditionally characterized those devoted to the Torah and its sustaining demands.

How Not to Help the Ultra-Orthodox
1. Essay

Are the Ultra-Orthodox the Key to Israel's Future?
3. Response

By the Sweat of Jewish Brows
4. Response

How the Ultra-Orthodox Undermine Themselves
6. Last Word

Could the Haredi System Melt Down?