Something More Profound than Prejudice

As Wagner illustrates, anti-Semitism is more than a mere dislike of Jews—it’s a metaphysical condition that shapes the very way the world is perceived. 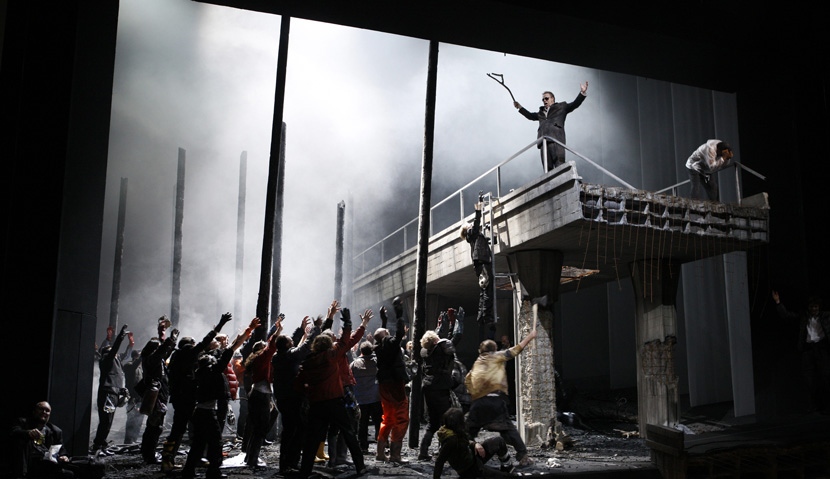 Reading Nathan Shields’ powerful essay, “Wagner and the Jews,” reawakened memories from two decades ago when I attended the Bayreuth festival as a music critic. My most potent recollections are not of the performances I heard of Wagner’s music; nor do I recall any great revelations about the mind of the master who designed and built this self-aggrandizing temple. But I was left with three sensory impressions, and they have proved indelible.

First there was the sound of the theater, the venerable Festspielhaus. The music had an almost material presence. It didn’t seem to emerge from the orchestra pit extending under the stage but took shape, instead, in the resonant air of surrounding space, like the sound of an organ in a great cathedral. Wagner was as great an acoustician as he was an orchestrator.

A heat wave that summer had also led to triple-digit temperatures inside the theater, where no whir of a ventilation system or whisper of an air-conditioner’s compressor was permitted to pollute the sonic purity of the sacral music. My tuxedo was as sweat-drenched as if I had been spending the Wagnerian hours hammering furiously near the fiery furnaces of Alberich and his Nibelung dwarfs.

And then there was the outdoor garden, where the hot sodden air, and the building’s great windows looming above, instead of inspiring thoughts about the imminent twilight of the gods, spurred thoughts of historical photographs: in 1938, the entire formally dressed audience, pressed together in the space in which I now stood, their hands thrust in salute as they gazed up at the Führer waving to them from one of those same windows. Talk about fiery furnaces.

And here I come to the main point on which I would differ with Nathan Shields’ analysis.  Shields leads us, carefully and methodically, into the heart of the matter—the metaphysics of anti-Semitism as heard in Wagner’s music. But, at least as far as that music’s aftershocks are concerned, he seems to me overly generous;  the historical connections between Wagner and German anti-Semitism are profound.

Yes, many preconceptions about those connections are incorrect, as Shields demonstrates. But, during the Nazi period in particular, it doesn’t matter that Hitler never explicitly mentioned Wagner’s opinions about the Jews; it doesn’t matter whether or not Hitler preferred Wagner to Franz Léhar or Anton Bruckner; it doesn’t even matter that Puccini’s Tosca, rather than anything by Wagner, was the opera most performed in Germany during those years. We don’t need to find a smoking gun in order to smell the sulfurous air.

Just consider the Bayreuth festival itself, where Wagner’s music was first wed to German nationalism and then to Nazism. Soon after the theater’s dedication, it was referred to as “a holy place of the German soul.” The title of a 1911 book was The Culmination of the Aryan Mystery in Bayreuth. And as early as 1924, performances of Die Meistersinger von Nürnberg were followed by heartfelt audience renditions of Deutschland über Alles.

Bayreuth enjoyed a unique and protected status within the Nazi cultural administration. Hitler found a warm personal welcome at Haus Wahnfried —the Wagner family home there.  He was called Uncle Wolf by Wagner’s grandchildren. Their mother, Winifred, became director of the festival during the Nazi period and remained an ardent Nazi loyalist until her death in 1980. The historian Frederic Spotts has suggested that Hitler sexually abused one of her children, Wieland, who after the war tried to dissociate Bayreuth from Nazi ideology by creating severely abstract productions of the operas.

I agree with Shields that such matters don’t necessarily prove anything conclusive about the music and its character. But even if they can’t explain the terrain, they starkly illuminate one aspect of it. Precisely because anti-Judaism played a fundamental role in Wagnerian musical cosmology, as  Shields suggests, I would press even further in examining instances of confrontation between the two worldviews even where they are not explicit. There are in fact many ways in which the opposition played itself out musically as well as intellectually.

Consider Die Meistersinger. It is difficult to experience that 1868 opera as if it were simply about a 16th-century guild of singing masters. The setting is a Nuremburg riven by controversy, rich in thuggery and threats. “Do I find you fighting again?” asks the cobbler-poet Hans Sachs of his fellow mastersingers at one point. The question might be asked throughout the opera. It portrays a world in which musical order affects social order, and both are contested ground.

And who is the drama’s villain?  Sixtus Beckmesser: a follower of harsh and antique law, who has no melody or art of his own but imitates and preys on others, even stealing the song of the young hero Walther; he  invokes law’s loopholes, and acts with amoral ruthlessness. As a caricature, doesn’t this sound familiar?

In the music, the allusions are more subtle. Beckmesser’s major songs are noted for their awkward rhythms and unbalanced phrasing; listeners in Wagner’s time apparently recognized them as satires of Jewish melodies. (The music scholar Ludwig Nohl, in 1870, wrote that Beckmesser’s weirdly stilted serenade of the young heroine Eva was believed to be “based on a Jewish melody, chosen by the composer in order to mock the Jews and their music.”) Ultimately, Beckmesser’s misconceived music leads to a violent riot. We are meant to sigh in relief when, at the opera’s end, Beckmesser is revealed as a fraud and Hans Sachs proclaims the triumph of “holy German art.”

Of course, we don’t have to label Beckmesser a Jew any more than we have to see him as a representative of the music critics Wagner disdained. (Beckmesser was originally intended to suggest one of them, Eduard Hanslick, who, Wagner wrote, had “Jewish origins, however discreetly disguised.”) Meistersinger might also be heard for what it pretends to be. But whatever the interpretation, the music presents us with something resembling a formal opposition between two stylistic worlds, two ideas about the nature of law and disorder. And the advocacy is clear: in place of Beckmesser’s strictures, Sachs champions a new testament.

In Meistersinger, this advocacy falls short of the redemptive nihilism—the “going under”—that Shields discloses as the ultimate goal of Wagnerian yearning. Actually, “nihilism” isn’t the word I should be using, since, even while pushing toward watery oblivion, Wagner still regarded art as a transcendent force, as the instrument of salvation or perhaps even, as Shields suggests, its substitute. I see this as he does, not just in the music’s embodiment of ideas that are counter-Judaic but in its grand attempt to go Christianity itself one better.

Which brings us back to Bayreuth. Parsifal, Wagner’s last opera, was conceived as the place’s “stage-consecrating festival play,” a sonic portico to the Wagnerian shrine. It is a ceremonial drama enacting the story of a ritual that has gone awry for lack of vigilance. The theft of the spear that pierced Jesus on the cross has left Amfortas, the king of the grail knights, in perpetual agony with an unhealed wound, and the eucharist ceremony with the holy grail will grant no relief.  There is a break in the tradition, accompanied by a forlorn sense of decay. Even at the end, when religion’s power is restored, the restoration has about it a sense of the archaic, hallowed by nostalgia. Religion’s powers and redemptive promise seem far more deficient than the opera itself, which in magnificent performances provides a sensation of timelessness (and in average performances can provide a sensation of unendurable eternity).

In 1880, as he was working on Parsifal, Wagner wrote: “One could say that where religion is becoming artificial, it is for art to salvage the nucleus of religion.” Such salvation would take place through appropriation of religion’s once vital symbols “so as to reveal the truth buried deep within them.” In this sense, Parsifal is really a tombstone for classical religion, in whose stead it offers itself and Wagnerian art: an even newer testament. Thus is the God of the Jews, having been mistakenly (in Wagner’s view) appropriated by the Church, now definitively “doomed by art.”

Of course, the Judaic world view opposed by Wagner, and many others with all-engulfing visions, requires more examination and explication than Shields could have given. It is also far from monolithic, so a more thorough exploration would require its own qualifications. (I think, for example, that attitudes toward utopianism and messianism, which have varied over Jewish history, are involved.) But “Wagner and the Jews” reminds us of a too often forgotten fact: namely, that anti-Semitism has to be looked at as something more profound than prejudice or the mere dislike of Jews or Judaism. It is a metaphysical condition with a long and complex history. It is not affected by particulars; rather, it actually affects and shapes the way the world is perceived. And it can express itself in the most unexpected forms—even, as Nathan Shields shows, in the form of seemingly “pure” and abstract sound.

Something More Profound than Prejudice
1. Essay

Wagner and the Jews
3. Response

“Going Under” in Europe
4. Response