In English, one “wears” just about everything, from clothes to hats to perfume. In Hebrew, there’s a different verb for each of these items and more. 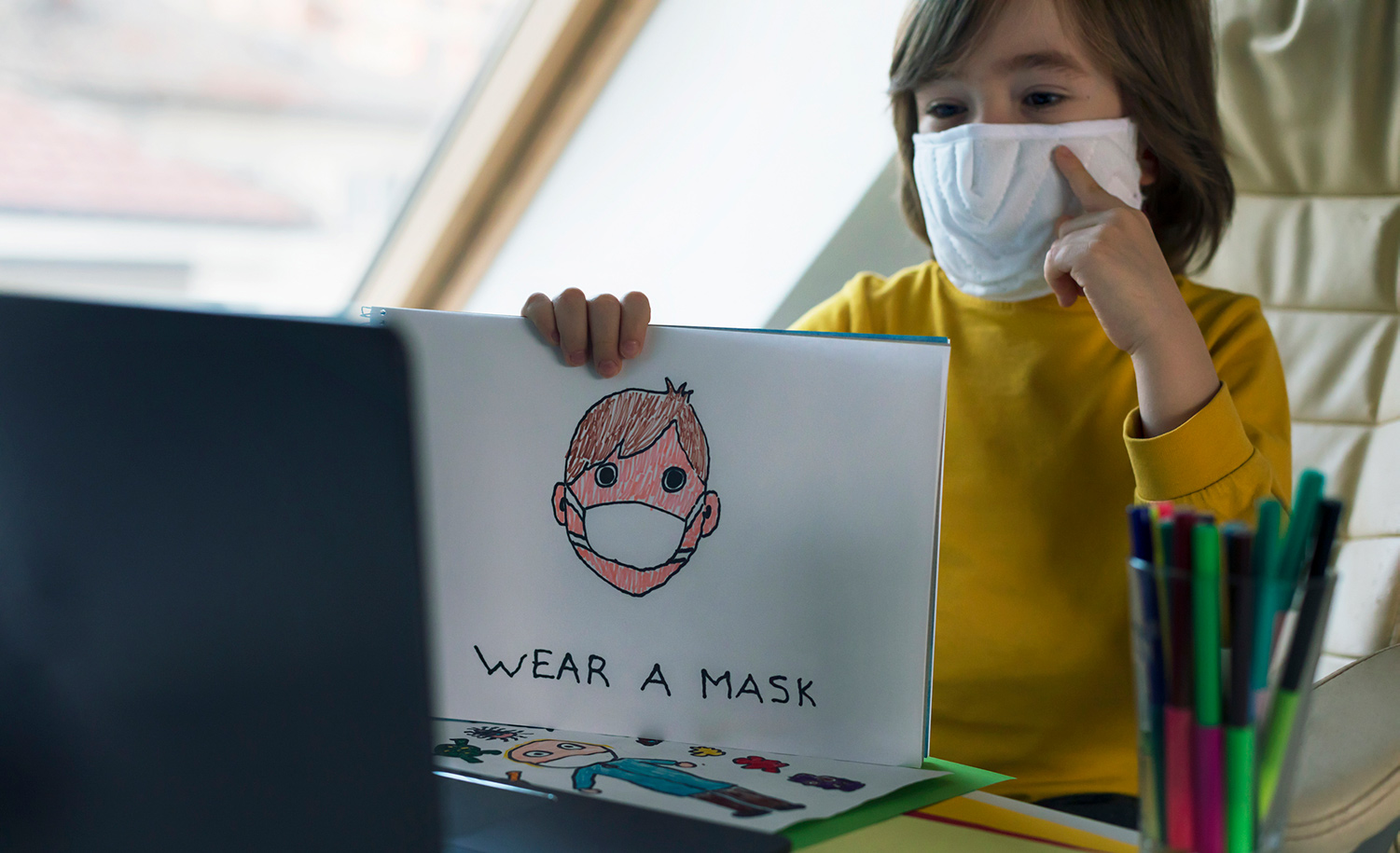 How many ways are there to wear a coronavirus face mask? There’s the right way, of course, with the strings looped behind your ears and the mask covering your nose and mouth. And there are the wrong ways of either leaving your nose uncovered or your mouth uncovered too, with the mask somewhere beneath it like a chin strap.

Three ways, with possible variations. Yet in Hebrew there are at least four, none having to do with what you cover and what you don’t.

First, though, a word of explanation. Hebrew, having a much smaller vocabulary than English, often has only one or two words to choose from in places where English has many. Take, for example, the act of stretching one’s lips while sometimes emitting a throaty or nasal sound. In English this can be variously described as to laugh, to smile, to beam, to grin, to chuckle, to chortle, to guffaw, to giggle, to titter, to snicker, to smirk, or to simper. That’s twelve different verbs, each with its own meaning. Hebrew has only four counterparts: tsaḥak, ḥiyekh, giḥekh, and tsiḥkek. True, it is possible to arrive at most of the nuances of the English twelve by adding qualifiers, which is often what a translator must do. One might translate “he grinned” as hu giḥekh mi’ozen l’ozen, “he giḥekhed from ear to ear,” and “he guffawed” as hu giḥekh b’koley kolot, “he giḥekhed at the top of his voice.” There’s no way, however, of matching the English word for word.

But there are exceptions to this rule. In a limited number of cases, it is Hebrew that is the richer language—and one of these is the case of verbs for wearing things. In English, one “wears” just about everything: hats, shirts, shoes, socks, ties, belts, jewelry, eyeglasses, even perfume. In Hebrew, there is a different verb for each of these items. The most general of them, and the closest to “wear” is lavash, which can be properly used for a wide variety of clothes, as in, hi loveshet simlah, “She’s wearing a dress,” hu yilbash ḥalifah, “He’ll wear a suit,” lavashti rak gufiya, “I was wearing only an undershirt,” etc. Yet if a man wears a hat, kova in Hebrew, one says hu ḥovesh kova, using the verb ḥavash. Of a woman wearing earrings, agilim, one says, hi onedet agilim, the verb being anad. “I will wear sandals” is ani en’al sandalim, with the verb na’al, and so on.

Not all Israelis are so meticulous about their language. Many, influenced by English “wear” and similar verbs in other languages, use lavash just as inclusively; this is one of the numerous fault lines running between the ordinary Hebrew of informal conversation and the “correct” Hebrew of formal or semi-formal occasions. Still, formal and semi-formal occasions occur not infrequently in life, one of them being when the public is told—on television, on radio, in the press, and on signs and in posted notices—to wear a mask when leaving the privacy of its home.

How does one wear a mask, a masekhah, in Hebrew? Until the COVID-19 pandemic, nearly all Israelis would have used the all-purpose lavash, although the more linguistically sensitive of them might have done so with the feeling that there should be a better, more specific verb for the act, as there is for wearing a shoe, a bracelet, or a hat. And in fact, as directives to the Israeli public to wear masks began to be issued in the course of the pandemic, a mask-specific verb was used for them. This was atáh (עטה), consisting of the root consonants ayin-tet-heh. Atu masekhah!, “Wear a mask!,” was now the ubiquitous command.

Atah is a verb with a good biblical pedigree. In the Bible it has the sense of wearing something, such as a cloak, by wrapping it around or pulling it over oneself, and it is sometimes used figuratively, as in the beautiful line in the book of Psalms that speaks of God cloaking Himself with light [atah or]. But the verb’s most relevant use in our context is in a recurrent phrase that is found for the first time in Leviticus, 13:45. There, in a discussion of contagious skin diseases such as leprosy, we read in the King James translation: “And the leper in whom the plague is, his clothes shall be rent, and his head bare, and he shall put a covering upon his upper lip [v’al safam ya’ateh] and shall cry ‘Unclean, unclean!’”

The leper, in other words, must not only warn people of his condition by going about bareheaded and in torn clothes like a mourner; he must also announce his presence by crying “Unclean!” as he goes. But what is the “covering” that he is supposed to put on his upper lip, for which the Bible uses the verb atah?

Actually, the word “covering” does not appear in the biblical text. In the phrase v’al safam ya’ateh, in which the literal meaning of safam is not “upper lip” but mustache, the verb ya’ateh, the imperfect form of atah, is intransitive and has no object: a word-for-word translation of the phrase would be, “And down to his mustache he shall wear [something] pulled over.” And though this something is not given a name, it is clear from other appearances of the phrase in the Bible that it is a veil or face covering of some sort that extends over the nose to the top of the mouth. This, too, was a sign mourning—when God tells the prophet Ezekiel not to mourn for the wife carried off by a plague, He tells him “And do not cover your face to your mouth [v’lo al safam ta’ateh]. But it would also have been a way, as was pointed out by the great medieval commentator Abraham ibn Ezra, of preventing the spread of the contagion.

Infectious disease—plague—fabric covering one’s eyes and nose: if one wanted to choose a special verb for wearing a coronavirus mask, what could be better than atah? Indeed, the word had already been used for mask-wearing before the pandemic, but only in written language. Although a Hebrew book about ancient Greek tragedy might have said of its actors that hem atu masekhot, “They wore masks,” no Israeli would have used such language in describing a Purim party to a friend. Then the verb would have been lavash or sam, “put on.”

Israel’s Academy of Language, whose regular advice to the Israeli public is just as regularly ignored by it, sought to get it to change its speech habits in the pandemic’s early days by issuing a special bulletin headlined Masekha—Otim, Ḥovshim, o Samim?, that is, “Do you oteh a mask, ḥovesh it, or sam it?” (The alternative of lavash was not mentioned by the Academy, being apparently considered infra dig.) After reviewing the pros and cons of each of these verbs, the Academy came down on the side of otim. The media have taken note, the Israeli public less so. It’s hard enough to get Israelis to wear their masks, let alone to use the right word for it.