Best Books of the Year, as Selected by Mosaic Authors 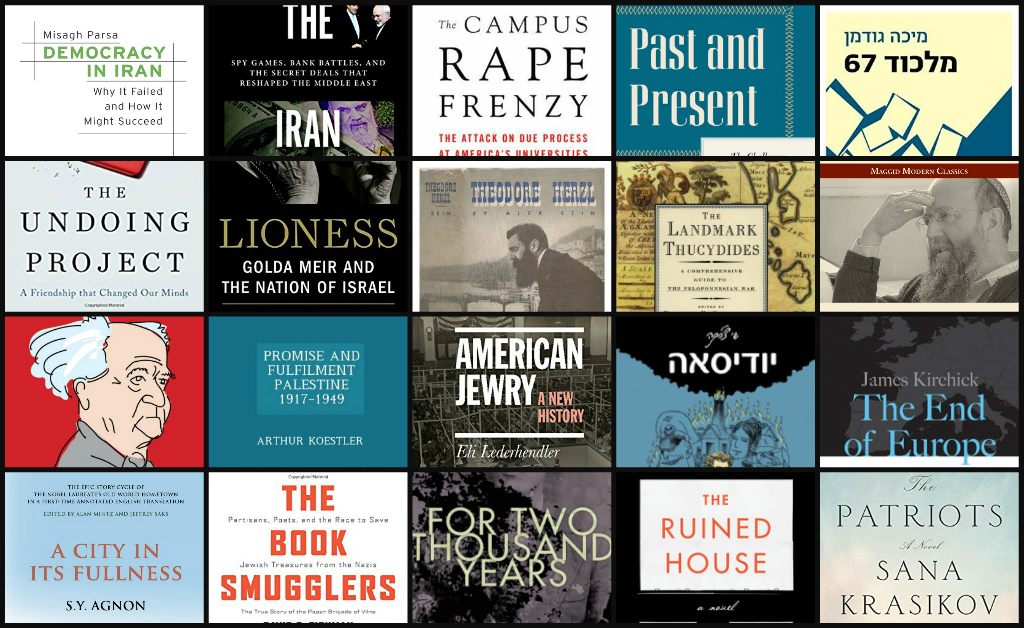 Peter Berkowitz is the Tad and Dianne Taube Senior Fellow at the Hoover Institution, Stanford University. In 2019 and 2020, he served as Director of Policy Planning at the U.S. State Department. His writings are posted at www.PeterBerkowitz.com.

Daniel Polisar is the executive vice-president and a member of the faculty at Shalem College in Jerusalem.

Neil Rogachevsky teaches at the Straus Center for Torah and Western Thought at Yeshiva University and writes a monthly column for Mosaic.

Michael Weingrad is professor of Jewish studies at Portland State University and a frequent contributor to Mosaic and the Jewish Review of Books.

To mark the close of 2017, we asked a handful of our writers to name the best two or three books they read this year, and briefly to explain their choices. Their answers are below. (All books were published in 2017 unless otherwise noted.)

Misagh Parsa, Democracy in Iran: Why It Failed and How It Might Succeed (Harvard, 416pp., $45). This history of the Islamic Republic is a reminder that the ayatollahs have been at war with the people of Iran since 1979. It is therefore also a reminder of whose side America must be on in that conflict.

Jay Solomon, The Iran Wars: Spy Games, Bank Battles, and the Secret Deals That Reshaped the Middle East (Random House, 352pp., $28). A fascinating and very sad tale of how, over the course of a decade of nuclear diplomacy, the Iranian regime fooled, outsmarted, misled, and eventually defeated the United States.

K.C. Johnson and Stuart Taylor, Jr., The Campus Rape Frenzy: The Attack on Due Process at American Universities (Encounter, 370pp., $27.99). The authors methodically expose the threat to liberty embodied in colleges’ and universities’ determined efforts to eviscerate due process in campus sexual-assault proceedings, and systematically refute the fraudulent factual claims used to justify these efforts. In so doing, they remind their readers that liberal education requires not only study of the principles of freedom but also practice in living in accordance with those principles.

Gertrude Himmelfarb, Past and Present: The Challenges of Modernity, from the Pre-Victorians to the Postmodernists (Encounter, 256pp., $23.99). With rare elegance, learning, and sobriety, this collection of essays, spanning 65 years, demonstrates the power of history in the hands of a master historian to illuminate contemporary cultural dilemmas and public-policy concerns. My review of it for Mosaic is here.

Micah Goodman, Catch-67: The Ideas Behind the Controversy that is Tearing Israel Apart (Dvir, 222pp., NIS 96, so far in Hebrew only). This short, indispensable book, which became an instant bestseller last spring in Israel, examines the combination of religious belief, political ideology, and identity that has led Israelis—and Palestinians, too—to a dead end in thinking about the Israel-Palestinian conflict. Goodman explains why comprehensive solutions—of the sort championed by Presidents Clinton, Bush, and Obama—are, at least in the short run, doomed to make matters worse. It would be more reasonable and just, he convincingly contends, for diplomats to pursue partial steps informed by lowered expectations that aim at increasing Palestinians’ control over their lives while providing for Israeli national security.

Michael Lewis’s The Undoing Project: A Friendship That Changed Our Minds (Norton, 2016, 368pp., $28.95) is among the most memorable books I’ve read in a long time. It is at once a page-turner, the story of a remarkable partnership between two brilliant Israeli scholars, and a highly readable chronicle of an intellectual revolution that began in psychology and gave birth to the field of behavioral economics and a host of other path-breaking disciplines affecting how so many of us understand the world we live in.

Golda Meir, a heroine to much of world Jewry during a political and diplomatic career that culminated in her serving as prime minister of Israel from 1969 to 1974, has in recent decades been increasingly maligned or ignored. Francine Klagsbrun’s Lioness: Golda Meir and the Nation of Israel (Schocken, 848pp., $40) is a monumental, meticulously researched, and gracefully written biography that should do much to restore the reputation of one of Israel’s most remarkable leaders. (Read Mosaic’s review here.)

One of my most powerful reading experiences this year came from revisiting a classic first published three-quarters of a century ago: Alex Bein’s Theodor Herzl: A Biography (Jewish Publication Society, 545pp., out of print). While there have been a number of excellent biographies of Zionism’s founder in recent decades, Bein’s encyclopedic knowledge of Herzl’s writings and his profound empathy with his subject enable him to convey in unparalleled fashion the true greatness of the visionary more responsible than anyone else for the creation of the Jewish state.

If America is in decline, we should skip the faddish stuff and read the biggest and best decline literature ever written. Thus I’ve been working my way through Thucydides’ History of the Peloponnesian War (Free Press, 2008, 752pp., $45), which, among other things, tells the story of the ascent to greatness of Athens, the first democracy, and its decline. The story should make for bracing reading for citizens in the great democracy of our day. As a companion piece, Seth N. Jaffe has just published a provocative interpretation of the History, Thucydides on the Outbreak of War: Character and Context (Oxford, 304pp., $90). Jaffe’s Thucydides reveals how the conduct of cities or states in foreign affairs is indelibly linked to what the cities essentially are, which is determined above all by the type of regime they have.

Turning to Israel—happily not in decline—I read two notable works this year. The first, published in 2015, is Nir Kedar’s Ben-Gurion and the Constitution (Bar Ilan, 318pp., $30), currently available only in Hebrew. This impressive book offers a systematic account of the first Israeli prime minister’s thoughts and actions on constitutional issues. Kedar offers an especially insightful interpretation of Ben-Gurion’s doctrine of mamlakhtiyut—once creatively translated by Michael Oren as “acting in a sovereign-like manner”—which the prime minister invoked to preserve maximum freedom of action for himself. Whatever the needs of governmental unity in the early years of the state, Kedar’s work draws out the anti-constitutional implications of Ben-Gurion’s thought.

I also chanced upon Arthur Koestler’s long-forgotten journalistic work Promise and Fulfillment (Macmillan, 1949, 358pp., out of print). Best known as the author of the anti-Communist novel Darkness at Noon, Koestler—a Hungarian Jewish disillusioned-Zionist-turned-disillusioned-socialist—was a slippery character. The reader of Promise and Fulfillment has to endure much 20th-century psychobabble equating religion with neurosis. At the same time, it is absolutely the best treatment of the British Mandate that I have seen, and gives the lie to the notion that British policy in Palestine stemmed from coherent design rather than from a hazy mix of contrary geopolitical notions, pride, vindictiveness, and occasional generosity. If Britain gained its empire “in a fit of absence of mind,” in the phrase of the 19th-century historian John Robert Seeley, its mismanagement of Palestine indicates that at least parts of the empire were lost in much the same way.

Eli Lederhendler’s American Jewry: A New History (Cambridge, 2016, 352pp., $34.99) is a bracingly fresh look at its subject. A professor at the Hebrew University of Jerusalem who immigrated to Israel from the United States, Lederhendler offers an economic and social history free at once of both American Jewish anxiety and American Jewish self-congratulation; the result is eye-opening.

The talented political cartoonist and illustrator Shay Charka has earned praise for his visual rendition of three stories by the great Israeli writer S.Y. Agnon. Problematic but just as fascinating is Charka’s recent Hebrew graphic novel Yudise’ah (Modan, 2016, 123pp., NIS 98)—the title translates roughly as “Jewdyssey”—which retells the Odyssey as a Holocaust fable.

Speaking of Agnon, Alan Mintz’s Ancestral Tales: Reading the Buczacz Stories of S.Y. Agnon (Stanford, 440 pp., $65) is a profound scholarly analysis of A City in Its Fullness, Agnon’s literary reconstruction of the Galician town of his youth. Sadly, Mintz passed away just as the book was being published, but his explications are enduring consolation for those who miss this scholar’s quietly fervent voice.

David Fishman wrote The Book Smugglers (ForeEdge, 312pp., $29.95) for those who had never heard of the “partisans, poets, and the race to save Jewish treasures from the Nazis” in the Vilna Ghetto. His subject are members of the “paper brigade” who risked their lives to conceal the books and documents that the Nazi looting agents commanded them to pack up for shipment to Berlin. I knew some members of the paper brigade and was familiar with their exploits, so it was a special thrill to read this splendid history of what constituted Jewish heroism under unimaginable threat.

I had never heard of Mihail Sebastian when I was asked by Mosaic to review his book For Two Thousand Years (Other Press, 240pp., $16.95). As a result I also read his Journal 1935-1944: The Fascist Years. Sebastian was not someone I would have been eager to know personally, but I learned much from his fearless description of life in the anti-Semitic Bucharest of his time.

When I read Ruby Namdar’s The Ruined House (HarperCollins, 528pp., $29.99) in the original Hebrew (reviewed here), I was surprised by how idiomatically it evoked some of New York’s Upper West Side. When I read the recently published English translation, masterfully done by Hillel Halkin, I was surprised again to feel how the haunting fate of the Jerusalem Temple intrudes on the life of an otherwise unmindful Jew. Among the intriguing features of this book is the way in which things that are either strange or familiar in the two civilizations, ancient Israel and modern America, figure differently in the two languages themselves. One wonders how the book might read in French or Arabic.

Sana Krasikov’s The Patriots (Spiegel & Grau, 560 pp., $28) is like an intricate, novelistic mirror image of the TV show The Americans. Sweeping, intimate, and beautifully written, it explores Russia and America between the world wars and today, with everything from family to friendship to romance compellingly rendered.

Shimon Gershon Rosenberg’s Faith Shattered and Restored: Judaism in the Postmodern Age (Maggid, 248pp., $21.20). Rav Shagar, as its late author was known, could read only Hebrew and spent most of his life studying Talmud. So who would expect compelling insights on postmodernism on page after page? This book is a stunning set of essays on Judaism, philosophy, and faith from a teacher I am ashamed to say I did not know. I look forward to learning more from this remarkable man. (Read Mosaic’s review here.)

James Kirchick’s The End of Europe: Dictators, Demagogues, and the Coming Dark Age (Yale, 288pp., $27.50) chronicles closing time in the gardens of the West. Kirchick takes us to Hungary, Germany, Greece, France, Britain, and the Ukraine, and dissects the sclerotic EU with detours and stinging aperçus. This book is a brilliant tour d’horizon, filled with setting suns. (Read Mosaic’s review here.)

Best Books of the Year, as Selected by Mosaic Authors