Why Is the Beta Israel Term for God Different from the Hebrew Terms for God?

The answer might help uncover the origins of Ethiopian Jewry. 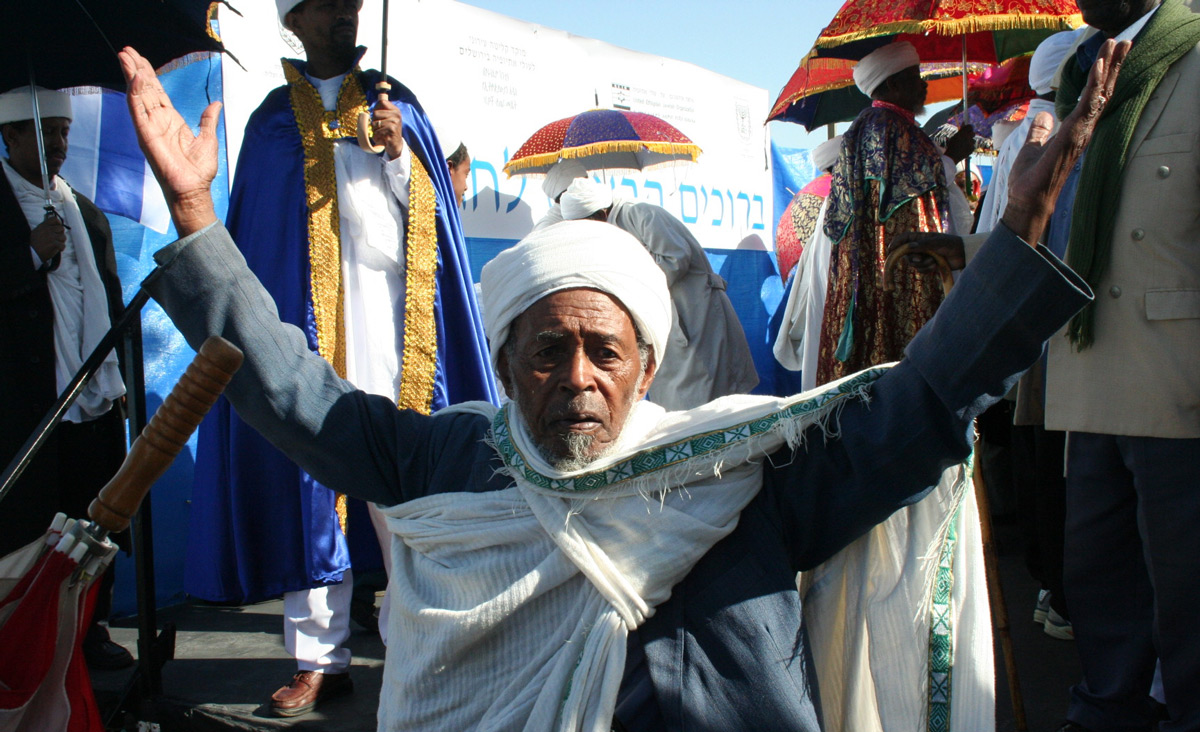 An Ethiopian Jew celebrating the holiday of Seged. Wikipedia.

Yoske runs a small and popular hummus place in our town. He’s a Ḥabad ḥasid and keeps a shelf near the door with religious literature for customers to browse in while waiting. A few days ago, I was surprised to come across there, among the tracts of advice and inspirational treatises, a slim paperbound volume identified by its cover as Volume III, No. 1 (1980-81), of the Journal of the American Society for Jewish Music. “Yoske,” I asked, showing it to him, “what is this doing here?” Yoske had no idea. “Someone must have donated it,” he said. “But if you found it, God wanted you to have it, so take it.” His term for God was the traditional ha-kadosh barukh hu, “the Holy One Blessed Be He.”

I took the Journal of the American Society for Jewish Music home with my hummus and soon was reading an article on “Seged: A Falasha Pilgrimage Festival.” Its author, Kate Kaufman Shelemay, later published a book titled Music, Ritual, and Falasha History. Yoske would have taken all this as a confirmation of his belief in Providence, because the Seged festival, an annual celebration of Ethiopian Jews—who are rarely called Falashas any longer and are often referred to as Beta Israel—occurs this year on November 11, just in time for today’s language column.

These days, Seged is observed almost exclusively in Israel, to which nearly all Ethiopian Jews have immigrated. Back in the early 1980s, however, it was restricted to the highlands of northern Ethiopia. As described by Shelemay:

On the 29th day of the eighth month [the Beta Israel lunar calendar begins, as the Jewish year did in antiquity, with the spring month of Nisan], . . . the Falashas come together to ascend a mountain, where they prostrate themselves in prayer. The fast observed by them during the mountaintop ceremony is broken when the community descends to the village below to take part in feasting and secular entertainment. . . . The name seged is derived from a Geez root meaning “to bow” or “to prostrate oneself.”

Geez or Ge’ez, a south Semitic language no longer spoken, is sacred to both Christian and Jewish Ethiopians. The Torah of the Beta Israel, who had no knowledge of Hebrew, was written in it, and much of their liturgy is recited in it. Its Semitic affiliation can be seen in the word seged itself, a cognate of the Hebrew verb sagad, which, too, means to bow or prostrate oneself.

Anyone knowing Hebrew, indeed, can easily pick out many such words in the Ge’ez phrases that Shelemay records in the ceremony attended by her. In her list of the prayers recited on the mountaintop, for instance, there is one that begins ‘esebḥo la’egziabher baḥeywatya, “I will praise God in my life.” “I will praise” in Hebrew is ashabe’aḥ; “in my life” is beḥayay; and Hebrew le-, “to,” is like the la of la’egziabher, the preposition following the Ge’ez verb for “to praise.” Although Hebrew belongs to the northwest Semitic family and is about as far from Ge’ez as two Semitic languages can be, their common roots are apparent.

But what Hebrew can be recognized in egziabher, “God”? None at all, which is something to think about.

Egziabher is a Ge’ez word with three components: egzi, “Lord”; –a, a possessive postclitic; and beher or bher, “nations”—in short, “Lord of the Nations.” The word is not an immemorially old one. Rather, it was coined during the 4th-century reign of Ezana, Ethiopia’s first Christian monarch, who ruled over and extended the domain of the powerful kingdom of Aksum. Its coiner was probably Ezana’s religious adviser Frumentius, the Syrian-born first bishop of the Ethiopian church. Prior to the arrival of Christianity, the Aksumites had been pagans worshiping different gods and lacking a word in their vocabulary for the single God of monotheism. Egziabher was a neologism invented to fill this gap, and to this day it is the word for God in Amharic, the official language of Ethiopia that is descended from Ge’ez and spoken by many Beta Israel.

Could this have a bearing on Ethiopian Jewry’s origins? Broadly speaking, there exist two opposing schools of thought regarding those origins. One is that the Beta Israel community in Ethiopia predated Christianity and continued to maintain itself after the latter’s establishment; the other, that it was a Judaizing offshoot of Christian groups that did not crystallize until a thousand years after Ezana.

Proponents of the first view have pointed to the existence in Ge’ez of a small number of clearly Hebrew-derived words, such as meṣwat, “alms,” from Hebrew mitzvah, “commandment” or “good deed,” and tabot, “ark,” from Hebrew tevah. Perhaps the most interesting of these is the Ge’ez word for Friday, ‘arb, which can only be explained as deriving from Hebrew erev, “evening,” and specifically, from the expression erev shabbat, “Sabbath eve.” Unless there were already Jews in Ethiopia in pre-Christian times, it is argued, such words could not have entered Ge’ez.

Adherents of the second view concede that Jews, settling in Ethiopia from Yemen, Egypt, or elsewhere, could have introduced such words into Ge’ez but contend that the Beta Israel cannot be traced back to them. And this, it may be, is where egziabher comes in. After all, if a pre-Christian Jewish community had survived as the Beta Israel, wouldn’t it be reasonable to assume that it would have preserved its own Jewish—that is, originally Hebrew—word or words for God, brought by it to Ethiopia before a parallel Ge’ez word existed? If only a single Hebrew word had remained in its vocabulary, wouldn’t this in all likelihood have been that word?

Jewish communities speaking the world’s different languages have always, as do English-speaking Jews, used those languages’ words for God, whether these be Yiddish got, Ladino dio, Arabic allah, or others, but they have also always had their own distinctively Hebrew words and names, like Yoske’s ha-kadosh barukh hu. The fact that this is not the case with the Beta Israel suggests that they may never have had any Hebrew epithets for God to begin with, which would strengthen the argument that their origins are relatively late. Although it is, of course, no proof of anything, it does make one wonder.

Why Is the Beta Israel Term for God Different from the Hebrew Terms for God?