The Jewish Museum's Discomfort with Religion

The museum’s latest core exhibition reveals a distance from Judaism indistinguishable from disregard, embarrassment, and disdain. 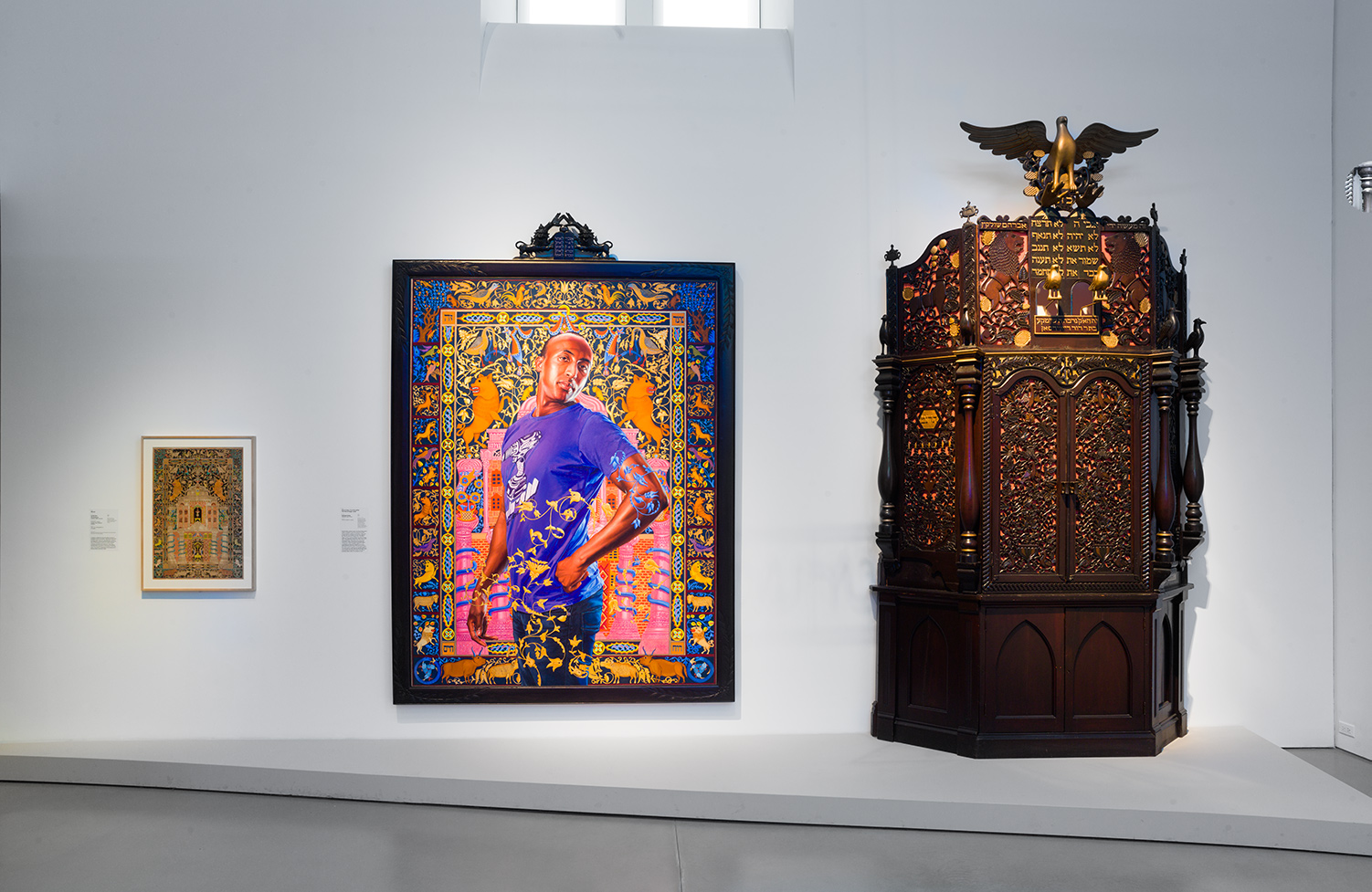 An 1877 Ukrainian mizraḥ, Kehinde Wiley’s painting of Alios Itzhak, and an ark from Iowa. Jewish Museum.


Tom L. Freudenheim is an art historian who has served as the director of several museums, as Assistant Secretary for museums at the Smithsonian Institutions, and as director of the museum program at the National Endowment for the Arts.

Menachem Wecker’s essay on Scenes from the Collection, the latest permanent exhibition at the Jewish Museum of New York, is so wide-ranging in its erudition, and so on-target in its insights, that although I’m a partial insider (having worked at the museum a half-century ago), I found it very impressive indeed.

Wecker, a relatively young man, is in possession of a Jewish education that is probably atypical of most of the museum’s visitors. By contrast, I’m a senior citizen who risks sounding like the character of the Grumpy Old Man played by Dana Carvey on the old Saturday Night Live—the kind who carries on about how much better things were in the past, and that’s the way we liked it.

In truth, though, I can’t say I really liked it better growing up in a world of Jews who still lowered their voices to whisper the word “Jewish” in restaurant conversations, or who swelled with unseemly pride when the 1950 recording by Pete Seeger and the Weavers of the Israeli folk song Tzena, Tzena, Tzena gave “us” temporary standing on the Hit Parade.

Nowadays, to judge by sources like the 2013 Pew survey, American Jews are less self-conscious about being Jewish. But are they, really? Could it be, instead, that their self-consciousness just runs in directions more in line with today’s rather than yesterday’s cultural norms? Wecker’s ruminations and strictures about the Jewish Museum’s “Jewish problem”—evidenced by its wildly overdone distancing of itself from any taint of “parochialism,” together with its marked condescension toward Judaism itself—invite speculation.

There is some history here. When the Jewish Museum first moved toward displaying contemporary art lacking any palpable connection to Jews or Judaism, it was partly following in the  footsteps of Karl Schwarz, the director of Berlin’s Jewish Museum: an institution that opened in 1933 around the same time that Hitler seized power and closed five years later after Kristallnacht. Schwarz’s idea, then quite original, was that, along with showcasing the “material culture” of the Jewish past—ritual objects, books, and other artifacts—a Jewish museum might legitimately start to pay attention to the work of living Jewish artists.

Two decades later in New York, with its transformational 1957 exhibition Artists of the New York School: Second Generation, the Jewish Museum both adopted Schwarz’s idea and went beyond it to include work by contemporary non-Jews and, as often as not, on non-Jewish themes. It thereby established a model that in one form or another continues to this day and that, to be fair, has resulted in a number of remarkable and occasionally even ground-breaking shows.

In doing so, the museum hardly escaped controversy or, especially, conflict with the Jewish Theological Seminary (JTS), its founding institution and proprietor. In 1947, as Wecker notes, with the opening of the museum in its then-new home on Fifth Avenue, JTS’s chancellor Louis Finkelstein defined its mission as the preservation and celebration of “the singular beauty of Jewish life, as ordained in the laws of Moses, developed in the Talmud, and embellished in tradition.” By the 1960s, it had become known instead, and with reason, mainly as an influential venue for the artistic avant-garde.

That transformation needed to be rationalized, and an argument for it was quickly developed. The new argument went like this: Jews were a cosmopolitan people, interested by definition in a wide range of ideas and areas of cultural creativity both within and outside of the Jewish world. Often adduced in this context was the example of Commentary magazine, founded in 1945 by the American Jewish Committee as a high-level forum of discussion of both Jewish and non-Jewish issues by writers and thinkers—what we now call “public intellectuals”—many but not all of whom were themselves Jews. Especially after Norman Podhoretz was appointed editor of Commentary in 1960, the magazine’s existence and success were invoked to justify JTS’s support for influential exhibitions at the Jewish Museum less and less related to the vision articulated in 1947 by Louis Finkelstein.

Such exhibitions flourished in the mid-1960s under the brief directorships of Alan Solomon and Sam Hunter, years that happened to coincide with my own tenure at the museum as a young curator, aspiring art historian, and ex-rabbinical student. Partly owing to the last-named credential, no doubt, I ended up being responsible for the “Jewish” parts of the museum, and soon became well-acquainted with its by-then considerable collections of Judaica of all kinds—collections that were then, and remain today, second only to the holdings of the Israel Museum in Jerusalem.

And this brings me back to Scenes from the Collection, so skillfully picked apart by Wecker. I concur with most of his criticisms of the exhibition’s substance. With regard to its presentation of, in particular, material related directly to Jewish religious traditions or values, he is certainly correct to point to the organizers’ shoddy scholarship and connoisseurship. I would only underline his point by stressing that museums thrive or wither not only on the visions of their directors but on the ideas, interests, ambitions, dreams, and scholarship of their curators. (Susan Braunstein, the museum’s longtime Judaica curator, retired some months ago and, although remaining on staff part-time in an emerita position, has yet to be replaced.)

As a counterexample to the latest “core” exhibition, Wecker writes with some enthusiasm about its 1990s predecessor, Culture and Continuity: The Jewish Journey, which indeed went far toward restoring the focus on the “Jewish” in Jewish Museum. I was never a great fan of that show for one simple reason: at its outset, visitors were invited to ask how Jews had survived for so many centuries and millennia, and were promised that the exhibition would answer that question. In fact, it’s sheer museological vanity to suggest that Jewish survival can be understood via Judaism’s material culture alone.

This stipulation aside, however, the conceptual premise of Culture and Continuity was solidly based: the Jewish Museum does indeed house any number of important works of Judaica—its field of specialty—that cannot be seen anywhere else. Indeed, the same principle underlies permanent exhibitions in most museums. Which is not to say that collections don’t also get temporarily rearranged to suit a curator’s creative idea, or some practical exigency. (For example, parts of the 17th-century Dutch collections in New York’s Metropolitan Museum of Art are currently on view in a two-year special exhibition because of skylight renovations in the main galleries.) But that is secondary, not primary. Permanent exhibitions are all about the core: how, in the end, a museum identifies and presents itself.

Where does the Jewish Museum fit here? For me, the real scandal today is that a collection of such size, quality, and historical importance has been reduced from the museum’s main attraction to a resource only for special exhibitions like the airily named Scenes from the Collection. Evidently, in the museum’s current thinking, the core works in its collection are to be seen only in the context of thematic and temporary special exhibitions like this one, surrounded by works of tangential, or arbitrary, or opaque relevance. This rethinking, to put it bluntly, can only reflect a disdain for the museum’s core assets on the part of the institution’s leadership (both the staff and the trustees).

Among those core assets are not only the thousands of items in the collection but the self-understanding of Judaism itself. In his essay, Wecker raises serious questions about the attitude toward Judaism held by the museum’s leaders and stewards. Here, too, a larger cultural phenomenon may be seen at work: namely, a pervasive discomfort, or embarrassment, manifested by many art museums these days, when it comes to Western religion. For obvious reasons, Christianity is the prime example. To take the Met once again, but hardly the Met alone, the reigning but incorrect assumption appears to be that everyone knows the meaning of Christian devotional art, that everyone can readily identify saints by their visual attributes, and that everyone can “read” the allusions and symbols in paintings of the Madonna or the Crucifixion.

Of course that is not the case: many if not most Christians are as ignorant of their religious traditions as are most Jews. Why, then, the silence? After all, explication is available for “exotic” religions (Hinduism, Buddhism, Islam, and so forth). Only with Christianity and, at the Jewish Museum, with Judaism is a fastidious distance observed—a distance indistinguishable from indifference or, again, discomfort, embarrassment, and disrespect. In each case, the result is an abdication of the opportunity and the responsibility to educate the public about some of the greatest and most important works of Western art.

I’m a reasonably well-educated but not especially religiously observant Jew. Nevertheless, like many other Jews, I’m wholly unembarrassed to lay claim to my Jewishness, not only as a matter of ethnic pride but also in my being a legatee of a venerable and quite awesome religious tradition.

American Jews can rightly be proud of, among other things, the Jewish museums that their communities have developed and supported, and that have in turn served as models for other ethnic and group-based museums around the country. As Edward Rothstein, quoted by Wecker, has acutely observed, those many museums spawned by the Jewish example make a point of celebrating the unique traditions and values of their particular sponsoring groups. By contrast (with exceptions, like UC Berkeley’s Magnes Museum), Jews have deracinated their own museums to the point of flaunting not only an ignorance of the Jewish tradition but a disdain for it.

Menachem Wecker gives us example after example from Scenes from the Collection of the feckless and philistine lengths to which the Jewish Museum has gone in its dereliction from its elementary responsibility. Is it too much to propose that the accolades the museum so desperately craves from the art-world cognoscenti might be gained without totally reducing the “Jewish” in its name to the slim and increasingly fraying threads by which it remains connected to its tradition?

Anael Malet
May
The Wreck of the Jewish Museum
2. Response

The Wreck of the Jewish Museum
3. Response