In modern European history, Vladimir Putin is the first classically reactionary and even revanchist leader who is not, or at least not yet, an anti-Semite. 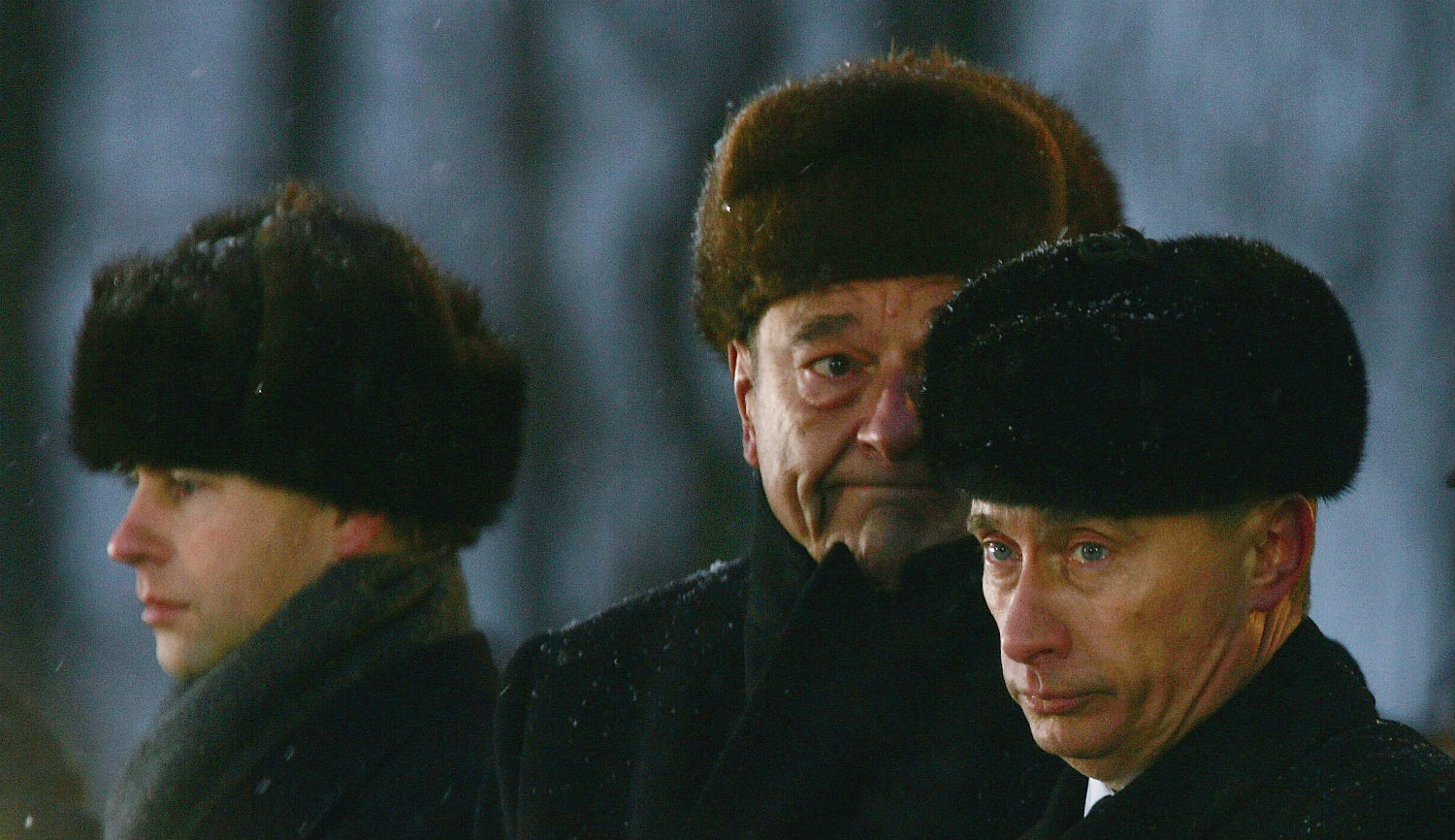 Vladimir Putin in a January 27, 2005 ceremony at Auschwitz, Poland, to mark the 60th anniversary of the liberation of the camp by the Soviet Red Army. Photo by Julian Herbert/Getty Images.
Response
Leon Aron
About the author


Leon Aron is the director of Russian studies at the American Enterprise Institute and the author of, among other works, Yeltsin: A Revolutionary Life and Roads to the Temple: Memory, Truth, Ideas, and Ideals in the Making of the Russian Revolution 1987–1991.

In his edifying and heartfelt essay, “The Prospect for Russia’s Jews,” Maxim Shrayer raises a number of issues that invite further reflection. I’ll touch on a couple of them.

A few years back, at what I was told was a “very closed” meeting in the Kremlin, an unusually expansive Vladimir Putin regaled the gathering with an elaborate anekdot (a joke). The gist, as related to me by a reliable first-hand source, and shorn here of its colorful verbal trimmings, was this: another Great Flood is about to engulf the earth, extinguishing the human race. It will happen within a month, and cannot be forestalled or prevented. To soften the blow, the clergy of every religious denomination have allowed the faithful to break all taboos. Muslims are given leave to drink alcohol, Catholics to indulge every deadly sin from sloth and gluttony to wrath and lust. Rabbis, by contrast, are urging their congregants: “We have a whole month. Jews! We must learn to live under water!”

If it seems to you that this anekdot was meant not just to amuse but to express respect and even admiration for the last-named group, you’re quite correct. Several of the Russian Jewish interlocutors in Shrayer’s report stress the importance of this same element in Vladimir Putin’s personal makeup. The Russian president may be almost certain to pick a fight with NATO on the alliance’s eastern flank, but, rather miraculously, he is also the first classically reactionary and even revanchist leader in modern European history who is not an anti-Semite. Putin’s Russia is the best non-revolutionary Russia that Jews have known since the 1770s, when Catherine the Great acquired them in the first partition of Poland.

“Non-revolutionary” is an important qualifier. Jews, or at least some Jews, have done well in revolutions and their immediate aftermaths. In the 1650s, Oliver Cromwell re-admitted Jews to England, from which they had been expelled almost four centuries earlier. In 1791, the French National Assembly granted Jews equal rights. And Russia’s four revolutions fit this pattern as well.

In 1905, the twenty-six-year-old Lev Davidovich Trotsky (né Bronshteyn) became the chairman of the St. Petersburg soviet, or council of workers’ delegates. The February 1917 revolution abolished the Pale of Settlement, and the Mensheviks and Socialist Revolutionaries, whose leaderships were overwhelmingly Jewish, had by far more deputies in local soviets and in the short-lived Constituent Assembly than did any other party. And, of course, the early Bolshevik Russia, like its contemporary Weimar Germany, saw an advancement of Jews to positions of political influence in numbers unprecedented in modern European history.

Then there was Russia’s fourth, most recent revolution (some would say counter-revolution), the one that began in 1987 and ran until 1999. In this period, which saw the undoing of Soviet Communism, Jews or half-Jews served as first deputy prime minister (Boris Nemtsov and Anatoly Chubais), president’s chief of staff (Chubais again), and minister of finance and personal economic adviser to the president (Alexander Livshits). Yegor Gaidar, economic reformer and acting prime minister under Boris Yeltsin, had Jewish grandmothers on both his father’s and his mother’s side.

Needless to add, these facts did not escape the Russian left. (European anti-Semitism began to migrate from right to left toward the end of the 1960s, and post-Soviet Russia followed suit.) Surfacing most prominently among supporters of Gennady Zyuganov, first secretary of the Communist party of the Russian Federation and Boris Yeltsin’s main rival in the 1996 presidential election, anti-Semitism has remained a staple of leftist propaganda ever since.

That Putin has refrained from tapping into this rich store of ammunition is all the more impressive given that condemnation of the “cursed” 1990s has otherwise been a key component in the stock narrative that undergirds the legitimacy of his own regime. A leading target in this litany has been the period’s splurge of so-called “bandit privatization,” among the most prominent beneficiaries of which were a number of Jews or half-Jews including the billionaires Roman Abramovich, Boris Berezovsky, Mikhail Fridman, Vladimir Gusinsky, and Mikhail Khodorkovsky.

In the early 2000’s, as I entered Moscow’s Jewish Community Center on my way to breakfast with Rabbi Berel Lazar (who figures importantly in Shrayer’s essay), I came upon the plaques commemorating the philanthropic contributions of these men to Jewish causes. Abramovich’s, at least two-feet square in size, dwarfed them all. Given Rabbi Lazar’s well-earned reputation for political astuteness, I can’t help wondering whether the names of Gusinsky and Berezovsky, outspoken opponents and specific targets of Vladimir Putin, are still there today. Abramovich, who is still in Putin’s favor, has nothing to worry about.

What makes Putin so happy an anomaly? What has kept him from the well-trodden path of European anti-Semitism? Was it, as some say, the Orthodox Jewish neighbors who often sheltered and fed him in the crummy communal apartment building where he grew up? Was it his favorite Jewish high-school teacher of German? According to Moscow and Jerusalem lore, after a teary reunion with this teacher on his 2005 visit to Israel, the first such visit ever by a Soviet or Russian head of state, Putin instructed an aide: “Buy her an apartment in Jerusalem!” (And so it was done.) Or was it his judo coach, Anatoly Rakhlin, for whose funeral, Putin, already president, traveled to St. Petersburg and after the interment abandoned his bodyguards and limo for a lone meditative stroll? Or Boris and Arkady Rotenberg, fellow judo enthusiasts and sparring partners whom he made billionaires?

Even at critical moments like the lightning annexation of Crimea and the ongoing war on Ukraine, with the country submerged in a deafening din of patriotic mobilization (or “mobilized patriotism,” in the coinage of the leading Russian political sociologist Igor Kliamkin), the inevitable accompanying rise in populist anti-Semitic sentiment has effectively been nipped in the bud. In the absence of an “official directive” (goszakaz), as Yuri Kanner, president of the Russian Jewish Congress, noted last October, anti-Semitic propaganda has been withering on the vine.

The results can be traced in surveys of public opinion. In a 2015 survey by the Anti-Defamation League, Putin’s Russia was found not only to be the least anti-Semitic of all East European countries but also to register less anti-Semitism than Italy, Spain, and Argentina (not to mention Greece). Last October, a Levada Center poll, commissioned for the international conference in Moscow that Shrayer attended and reports on, found only between 8 and 16 percent of Russians harboring “hard” anti-Semitic feelings.

Could Judeophobia nevertheless be unleashed? If, following several more years of an anemic economy, or after an embarrassing military defeat, Putin should find his back against the wall, might he yet turn to the old, tried and true formula for rallying national support? Almost certainly. Nor would the fact that there are at most 200,000 “self-identified” Jews in a nation of 140 million present a problem. In 1968, the Communist regime in Poland, where there were at most 30,000 Jews in a population of 32 million, managed to whip up a frenzy against the “Zionist Fifth Column.”

This past January, Petr Tolstoy, deputy chair of the Duma, mused openly about the “descendants of those who in 1917 jumped with guns out of the Pale of Settlement and proceeded to destroy our [Russian Orthodox] churches.” A trial balloon? A preemptive move by a shrewd courtier seeking later recognition as the first to have nudged the ship of state in the “right” direction?

So, to rehearse Maxim Shrayer’s overarching question: why are Jews staying?

Adjacent funerary niches in a wall at Moscow’s New Donskoy crematorium, next to the 16th-century cemetery of the Donskoy monastery, hold the ashes of my grandfather Lazar Abramovich Berenshteyn and my grandmother Rozaliya Efimovna Atlas. Son of a “merchant of the first [highest] guild” and thus privileged to reside outside the Pale of Settlement, Grandpa was educated in Heidelberg and New York, where he earned a medical degree. He then returned to Russia, ostensibly because his mother and sisters refused to leave but largely, I suspect, because he himself was loath to abandon the motherland. He volunteered in World War I, and received a commission as a praporshchik (the equivalent of a warrant officer) in the Tsar’s army. (Jewish doctors, dentists, or pharmacists were not required to convert in order to qualify for a commission.) He was injured and decorated.

Grandma Roza, among the first women to be admitted to the department of medicine at Kharkov University, graduated in 1914 and worked as a physician for 40 years. A popular song as I was growing up went like this: “Love Russia, love Russia! For the Russian heart, there is no better land.” Whenever she heard it on the radio or later on TV, Grandma would add, loudly and emphatically, “And for the Jewish heart as well!”

What would my grandparents say about their grandson who left Moscow for New York at the age of twenty-three with a suitcase and $100? Would they understand, let alone approve, his reasons and intentions? Frankly, I’m not sure, although I have my doubts.

Would it have helped their grandson plead his defense to note that his head was full of samizdat like Aleksandr Solzhenitsyn’s The Gulag Archipelago, which had disabused him of any hope that the motherland would ever become a normal state? Or that, in addition to the $100 and the suitcase, he was taking with him the complete works of Pushkin, Lermontov, Chekhov, and Gogol? Or that in subsequent years, outside his main vocation, he would write essays about Pushkin’s “Elegy” and Vasily Grossman’s Life and Fate, translate passages from Osip Mandelstam and Fyodor Tyutchev to serve as epigraphs to his books and articles, and weave Solzhenitsyn and Andrei Platonov, Mandelstam and Yuri Dombrovsky, into his policy analyses?

Again, I’m not sure. As Maxim Shrayer knows and well chronicles, we Russian Jews are an odd and complicated lot.

The Prospect for Russia's Jews
2. Response

Where Would Russia's Jews Go?
4. Response

The Roots of Today's Revival of Russian Judaism Lie Deep in the Soviet Past
5. Last Word