Israel and the Moral Striptease

Self-flagellation, if performed at the behest of someone else, with money from somewhere else, is no longer just self-flagellation. Israelis would do well to remember this. 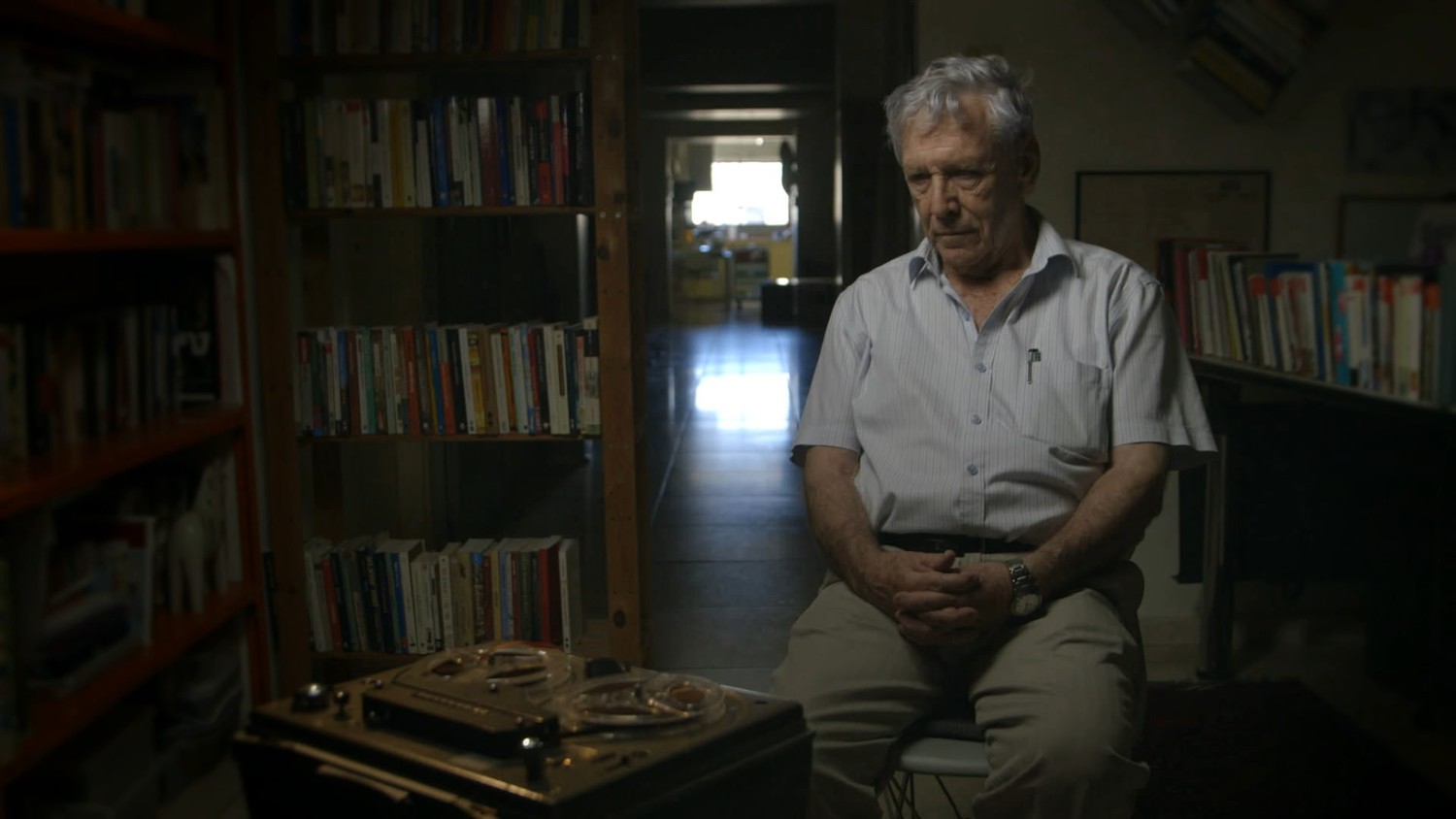 Amos Oz listens to testimony he gave after the Six-Day War, in which he fought. Photo by Avner Shahaf.

Response
Matti Friedman
About the author

Readers following the way that Israel is discussed abroad these days might be aware of two intertwined and mutually reinforcing tropes. According to the first trope, the story of Israel is not about complicated events with multiple players but about the moral character of Israel alone. Israel’s opponents generally appear as bystanders or corpses. Arabs don’t make decisions: they are merely part of the set upon which the Jews perform.

According to the second trope, Israel has dirty secrets that it is trying hard to keep under wraps. Thus, the claim that Israel “crushes dissent” has become common among the country’s critics, leading to expressions of the need to “tear off the mask,” “end the charade,” or “break the silence.”

Both tropes are on display in the new movie Censored Voices, to which Martin Kramer, in “Who Censored the Six-Day War?,”has skillfully applied his historian’s toolkit. (Kramer did the same last year in his detailed deconstruction of Ari Shavit’s account in My Promised Land of the Lod battle of 1948, which played to the same tropes.) The movie is about 1967, but it’s a product of the present moment. Like the work of the NGO Breaking the Silence, whose recent report on the 2014 Gaza war dominated international press coverage a few months ago, it is of the popular genre we might call the “moral striptease.” In this genre, introspective Israeli veterans—of whom Israel has many, a fact of which it can be proud—publicly undress, confessing their failings and those of their countrymen. These accounts are taken at face value and presented as disembodied truths, without details of the environment in which they occurred or the assumptions under which the soldiers operated, and without information that would allow corroboration.

Here, too, as in the work of Breaking the Silence, the creators use soldiers’ stories to focus the account of an Israeli war not on its complex causes or the muddled course of events but on the moral failure of the army, and of the nation. Here, too, this is done in the name of the soldiers themselves; other soldiers who might question this way of understanding events aren’t asked for their opinion. And here, too, Arabs are not actors but inanimate objects. This is unconsciously emphasized by one of the key characters, Amos Oz, who early in the film recounts how disturbed he was during the postwar national euphoria that “the other side [i.e., the Arab side] was given no expression”—and then participates in an entire movie about the Six-Day War that doesn’t let us hear an Arab voice or see an Arab soldier fighting. The two combatant sides in this strange universe aren’t Jews and Arabs, but Jews and their conscience.

Like the work of Breaking the Silence, Censored Voices was made by Israelis with the help of European funding (in this case, German) and geared in large part toward an international audience. Here, too, an internal discussion is removed from the situation in which it took place—in this case, among kibbutznik veterans of the war who shared knowledge and assumptions and were speaking comfortably among friends immediately after the ceasefire—and transported into a different environment outside Israel, where knowledge and assumptions are different and where the same words mean something else.

Information changes when it moves from one context to another. To cite a recurring example in the kibbutzniks’ conversations at the time: it is one thing to remark that seeing displaced Palestinians in wartime reminds you of the situation of Jews in the Holocaust—meaning that you remind yourself of the Nazis—if you are speaking in Hebrew to other shaken Jewish veterans in a bomb shelter a week or two after returning from the battlefield. Saying the same thing, as this movie does, to a sated film-festival audience at Sundance or Cannes is something else. It is one thing to say this at a time when many Israelis were gripped by elation at their victory and when the plight of the Palestinians was largely ignored both in Israel and abroad; it is quite another to do so in 2015, when Israel has become singled out as the world’s most egregious violator of human rights, if not the new incarnation of Nazism. And it is one thing to draw a comparison with the Holocaust in a booklet intended for other kibbutzniks, which is what the soldiers believed they were doing in 1967—and quite another to say this in a movie co-produced by Germans.

The question of context isn’t an easy one. Take Ari Folman’s animated autobiographical movie Waltz with Bashir (2008), a work of considerable genius. Seen by Israelis, or by an audience with a nuanced understanding of Israel, this is a keen account of the hallucinatory experience shared by soldiers during the 1982 Lebanon war and of their attempts to remember certain things and not others—in the case of Waltz, the perceived complicity of Folman and his comrades in the Phalangist massacres of Palestinian refugees at Sabra and Shatila. Seen through different eyes, Waltz can be understood (incorrectly, in my opinion) as suggesting that at the heart of the tortured Israeli soul is a heinous crime that we Israelis have tried to erase. On this level it plays, as does Censored Voices, to the powerful negative tropes that guarantee an Israeli production foreign funding and applause. There are many other examples.

All of this raises a key question for Israeli public life as well as for individual Israeli writers and artists. Given the way any scrap of critical information is seized upon, shorn of context, and hammered into a weapon to be used against us, must we Israelis temper the harsh self-analysis that has always been a national point of pride? What is an Israeli writer or director to do? Talk only about tech start-ups, drip irrigation, and the cherry tomato? Remake, again and again, versions of Exodus?

Of course not. We in Israel have to live with the fact that much creative work done here will be about “the conflict,” which is, sadly, a central and dramatic part of our lives. And much of that work will be critical, because Israel is a democracy with a history of raucous debate and little patience for jingoism. Foreign money will be involved, because the local market is tiny and local funding scarce. And the work will be consumed abroad, and will necessarily be seen differently there.

My modest suggestion is that Israelis must become more aware of the dangerous tropes that are establishing themselves where their country is concerned, and avoid them to the extent possible. Although this may sound strange to friends of Israel abroad, many Israelis, including journalists and directors, don’t grasp the nature of the international discussion of their country, or the degree to which much of that discussion is unprecedented in its scale and hostility. Such ignorance might have been forgivable five or ten years ago, but it isn’t any longer. Playing ball with the “moral striptease” genre is hard to resist—because of the international interest that comes with it, and because it saves you the trouble of actually creating stories and characters with compelling universal appeal. But it should be resisted nonetheless. Self-flagellation, if performed at the behest of someone else, with money from somewhere else, is no longer just self-flagellation, and there is nothing honorable about it.

I would also suggest that Israelis resist the temptation to claim they are bravely flouting “censorship.” The claim, merely by existing, largely proves its own inaccuracy, and it is also an insult to people in places where speech is actually censored. Debate here is advanced, open, and often agonized, and the country is so small and talkative that nearly nothing is secret. The fact that the director of Censored Voices has earned complimentary coverage in Israel’s biggest women’s weekly and in El Al’s inflight magazine hardly suggests a society “crushing dissent.” In fact, it suggests a society where dissent is celebrated even in the heart of the mainstream. One can only imagine the kind of cognitive dissonance this attention must have caused the people promoting the film as a work of brave and lonely protest.

Martin Kramer makes a strong case against the filmmakers’ claim that the information about the Six-Day War presented in their documentary was “censored” by the Israeli army. This is not a peripheral detail. To the contrary, it is the claim with which the movie begins, citing the precise figure of “70 percent,” and it is the basis for the very name of the movie in English. In fact, as Kramer points out, the army’s own chief education officer successfully fought to get the original book through military censorship intact, and eventually the censor himself came around. That story is interesting and telling, but it doesn’t match the movie’s agenda.

Indeed, when I asked Daniel Sivan, the producer of Censored Voices, about Kramer’s analysis, he called it the product of a “conspiracy” intended to draw attention away from the film’s revelations. He also asserted that the filmmakers have in their possession the original transcripts as “censored by the Israeli army” in 1967. What he didn’t explain was why people involved in the publication of the original work agree that ultimately there was almost no intervention by the censor, let alone a 70-percent cut. Nor did he explain why the uncensored version and the censored version are nearly identical.

Careful historical work like Kramer’s will be of interest only to those interested in careful history. As a selling point, it is hard to pass up the impression of a great secret revealed. The great secret allegedly revealed in Censored Voices is the same one now being constantly “revealed” by international reporters, by the United Nations Human Rights Council, by the mini-industry of foreign activists and officials who have descended on Israel like locusts on a wheat field, and by Israelis who accept their money and play along. That secret is war crimes. This is purported to be Israel’s secret in the present, and we will be hearing more and more about how it is Israel’s secret in the past as well.

Israel and the Moral Striptease
1. Essay