In the AMIA Case There Was an Unconscionable Miscarriage of Justice, But No Cover-Up

Who perpetrated the attack was known, but Argentina’s corrupt and tangled judicial system made it almost impossible to hold the guilty to account. 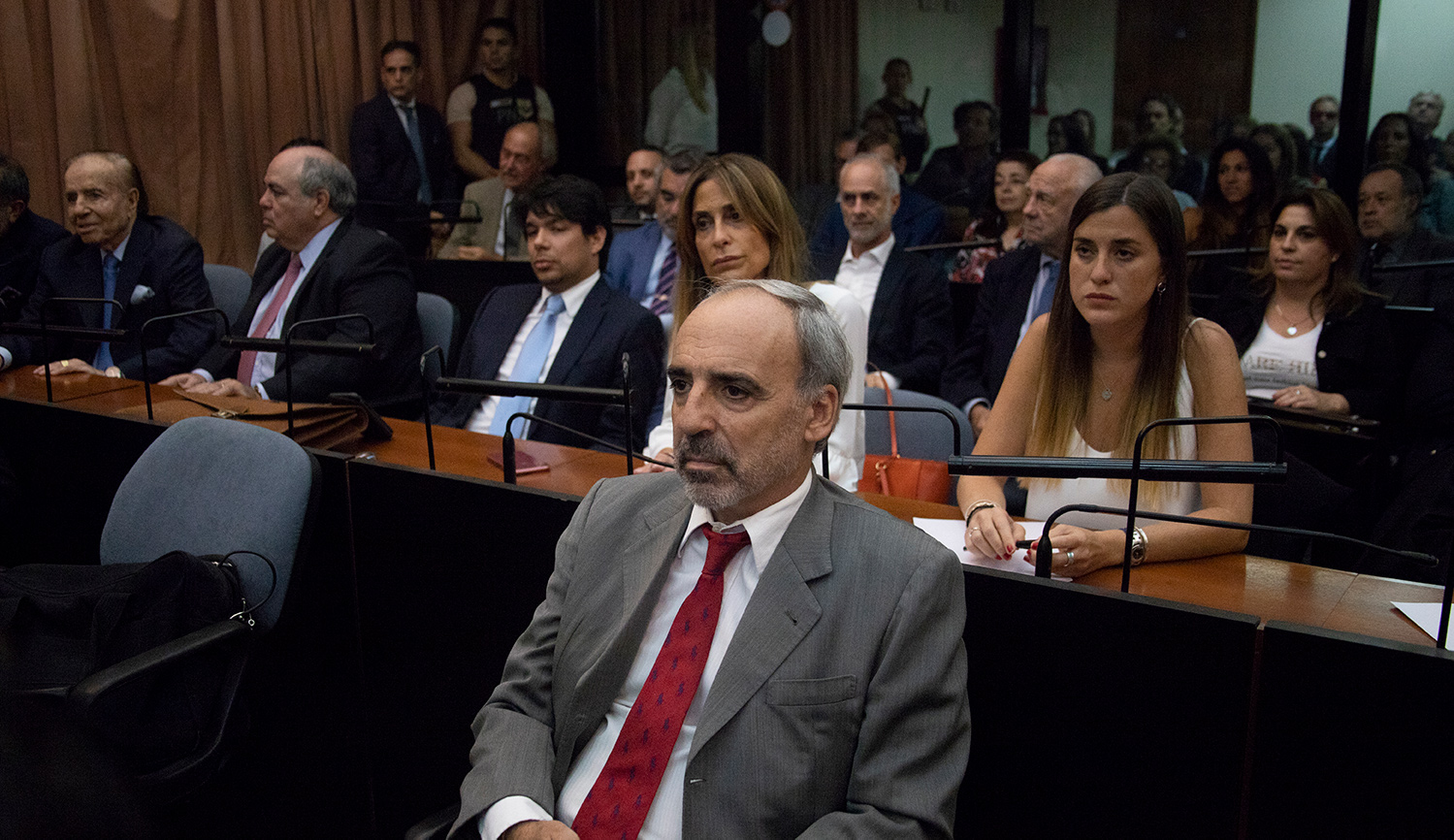 Response
Noga Tarnopolsky
About the author


Noga Tarnopolsky has two decades of experience as a journalist focusing on Israel, the Middle East, and Latin America.

Toward the end of his essay in Mosaic marking 25 years since the July 1994 terrorist attack on the AMIA building in Buenos Aires, Rabbi Avi Weiss states that “everyone knew that Iran masterminded the bombing.”

This is true; everybody did know. Perhaps not all were convinced of the fact immediately, but it certainly was the case by 2006, when Argentine federal prosecutors formally charged top Iranian officials with instigating and planning the attack and accused Hizballah, Iran’s Lebanon-based proxy, of carrying it out. (Iran in turn defended itself against Argentina to Interpol but failed to convince that international investigative body.)

In the intervening years, no substantive doubts have been raised about this point, which is supported by abundant evidence gathered by Israeli, American, and European intelligence agencies.

And yet, despite Weiss’s own acknowledgement of this fact, a fact presented to him by Argentine President Carlos Saúl Menem in 1994, he insists throughout his essay in advancing the theory that the Argentinian government was guilty of shamefully covering up that which everybody knew.

Thus, at the beginning of his recollections, we encounter Weiss, a first-time visitor to bomb-torn Buenos Aires, fixated upon this notion and convinced of the nefarious role supposedly being played in the cover-up by Menem himself. Weiss, who does not speak Spanish, was able to secure a meeting with the president thanks in part to letters of recommendation he brought from New York Governor Mario Cuomo, an internationally known figure, and the then-mayor of New York City, Rudolph Giuliani.

By his own account, Weiss chose a confrontational conversational launch, asking Menem: “Mr. President, why Buenos Aires? Why a second time?”

For all of his flaws, Menem, then sixty-four and nearing the end of his first term in office, was no naïf. The son of immigrants, like many Argentinian strivers, he had been a longtime governor of the rural province of La Rioja, and was only the second democratically elected Argentine president to follow the barbaric military regime that spanned the 1970s and 1980s. Born a Muslim, he had had to convert to Roman Catholicism in order to run for the presidency. Until the bomb exploded, the principal item on his agenda was a reform to remove that requirement from the constitution.

In a 2016 meditation on Argentina’s “culture of corruption,” the New Yorker’s Jon Lee Anderson colored Menem as the most brazen of Argentina’s galling modern presidents, comparing him with Italy’s Silvio Berlusconi. When questioned about the gift of a shiny red Ferrari he received from a businessman while in office, Anderson writes, “Menem exclaimed, ‘It’s mine, mine, mine!’” But however flamboyant and earthy a figure, Menem has never credibly been accused of showing any tolerance or sympathy for anti-Jewish terror. By Argentinian standards, as I argue below, he could best be described as benignly corrupt.

In 1994, facing a calamity of unprecedented scale and the families of the 85 Argentinian citizens murdered in the explosion, Menem had the benefit of two years’ worth of top intelligence briefings afforded him since the bombing of the Israel embassy in 1992. He was, at that stage, well-versed on Iran’s modus operandi. Two days after the worst act of terror in Argentina’s history, as first responders still dug through the wreck, Menem, according to Weiss, replied to the latter’s questions by saying that “his intelligence services had already concluded that a terror group, based in southern Lebanon and backed by Iran, had been behind the earlier bombing.”

To which, mystifyingly, Weiss reports himself rejoining: “You are accusing Iran of being behind these bombings. Why not investigate the possibility that they were carried out by Syrians, or by domestic neo-Nazis, or by some combination of the two?”

Menem was right, and Weiss was both wrong and rude. In his essay, he promotes his Syrian hypothesis by repeatedly mentioning Menem’s status as the son of Syrian immigrants to Argentina. There is no reason for this other than to imply that Menem would have had good reason to cover up a Syrian crime. And while the clandestine immigration of former Nazi officers both to Argentina and to the United States remains a historical disgrace, Weiss’s unfounded imputation straddles the line between obliviousness and comedy.

When, in Weiss’s recollection, Menem replied, reasonably, “It is inconceivable that Arabs and neo-Nazis could have worked together,” Weiss notes that he “seemed especially sensitive to the charge that neo-Nazis were involved, perhaps because they could have included some whom he had placed in high intelligence and security positions.” It is unclear which appointments Weiss may be referring to, but who wouldn’t be touchy when accused of neo-Nazi sympathies, not to mention job placements?

Weiss’s essay is peppered with numerous such casual errors. They serve only to underscore his lack of familiarity with Argentina and, however deep and genuine his sympathy for the AMIA victims, undermine the seriousness of his claim of a cover-up even before he contradicts himself in the admission that “everyone knew that Iran masterminded the bombing.”

Let us focus on this point. If the AMIA case is resolved, why is the pervasive feeling of injustice in Argentina so entrenched and so raw?

First, the structure of Argentine justice, made up of multilayered and intercrossing investigative and judicial authorities, appears designed to impede rather than facilitate an enormous investigation of this kind. The Argentine justice system was overwhelmed by the magnitude of this case.

In addition, a succession of petty figures, ranging from city cops to the owner of a pickup van used in one of the attacks, all the way up to an investigative magistrate, were caught in corrupt acts of personal enrichment that tainted the investigations.

None of this, however, amounts to anything near the massive government-sponsored cover-up that Weiss alleges took place, while offering no evidence to sustain his allegation.

In fact, the most egregious instance of corruption by any Argentine government actually confirmed Iran’s responsibility for the AMIA attack.

Far outpacing Menem’s corruption, in 2012 the government of then-President Cristina Kirchner signed a secret pact with Iran that would have had the effect of covering up Tehran’s responsibility for the 1994 bombing.

The government’s intention to sign this Memorandum of Understanding was exposed a year earlier by the crusading Argentinian journalist Pepe Eliaschev,  who revealed that Foreign Minister Héctor Timerman had passed a message to Iran confirming that Argentina was willing to “forget” the bombings of the Israeli embassy in 1992 and of AMIA in 1994. Writing that he was in possession of a copy of a document handed by Iran’s foreign minister to President Mahmoud Ahmadinejad, Eliaschev asserted that Argentina had lost interest in any judicial solutions for the two attacks, preferring instead to improve economic relations with Tehran.

Later revelations showed that, in a convoluted scheme, Argentina proposed to lift the names of Iranian defendants from Interpol’s wanted list and establish, with Iran, a joint “truth commission” charged with resolving the criminal charges against the accused Iranians. In exchange, Argentina was set to make lucrative agreements to sell grain to Iran and to purchase Iranian oil, possibly in a barter.

The full extent of this deal was uncovered by January 2015. Alberto Nisman, the same prosecutor who had charged Iran in 2006, revealed that to make the deal publicly palatable, Kirchner and Timerman intended to announce a “new theory” of who was responsible for the AMIA bombing.

On January 18, 2015, two days after accusing Kirchner of what amounted to treason, and on the eve of a highly anticipated address to the Argentine Congress, Nisman was found dead in a pool of blood in his bathroom. There was a bullet in his head and, on the floor next to his right hand, a casing and a .22-caliber pistol. Nisman was left-handed. No gunpowder residue was found on either hand.

Kirchner’s depraved efforts notwithstanding, the attempted cover-up failed. Yet even as a botched effort, it must be seen in the context of Iran’s tenacious refusal to turn over the individuals accused of the crimes, which irreparably hampered the course of justice. Iran’s stonewalling would have thwarted even the most efficient nation’s judiciary. In admirable detail, Matthew Levitt in his response to Weiss’s essay outlines the protections Iran continues to provide to its representatives who traffic in terror.

A single nexus joins Argentina’s ineffective judiciary and Iran’s venal policy of immunity for its agents, and it returns us to the injustice with which AMIA’s victims live to this day.

Argentina has no mechanism for trials in absentia, a judicial instrument that might have offered the bereaved and broken families a certain measure of comfort, and, almost without doubt, would have done away with the myth that we do not know who perpetrated the AMIA attack. Yet even the wrenching senselessness of this predicament does not permit us to imply that Iran has not been exposed or that there has been a cover-up of the terror attack itself.

And there is yet another angle, one that is all too often neglected: Israel’s refusal to cooperate with Argentina in the investigation of the 1992 bombing of its embassy. To this day, Israel has not publicly disclosed its conclusions about what the Israeli newspaper Yediot Aharonot called “one of the Mossad’s biggest failures.”

Two years ago, in an article commemorating that attack, in which 29 people lost their lives, among them four Israeli diplomats and four local embassy employees, the reporter Danny Adeno Abebe noted that successive Israeli governments “left the attack’s survivors to deal with their mental and physical pain on their own and to keep asking themselves why isn’t Israel doing everything in its power to pressure the Argentinean government to bring the attack’s perpetrators to justice.”

Israel had its own reasons for non-cooperation, among them ongoing intelligence operations that the Buenos Aires embassy bombing had aborted. Still, whatever the need to safeguard those operations, the fact remains that it was only in 2015 that Israel transmitted to Argentina information tying two Hizballah operatives to the 1992 bombing.

The Israeli approach, in which emphasis was placed on Israel’s ongoing concerns in the Middle East at the expense of any substantial probe into Buenos Aires as a locus for terror, undoubtedly contributed to the sense of impunity that fueled the Iranian masterminds behind the second, more deadly AMIA attack.

All of this amounts to enduring frustration, agony, and an unconscionable miscarriage of justice, but no cover-up of the facts. There is no AMIA cover-up. The case has long been closed.

In the AMIA Case There Was an Unconscionable Miscarriage of Justice, But No Cover-Up
1. Essay

The Men Responsible for the AMIA Bombing Are Known—and Still at Large
3. Response

In Argentina, France, and Elsewhere in Europe, Attacks on Jews Are Judged by a Separate Yardstick
5. Last Word