Can the Zoom Seder Foster Faith?

Some families prefer the connection it offers. But an online seder seems like an acknowledgement of generational failure, a stopgap measure to keep nostalgic religious affiliation afloat. 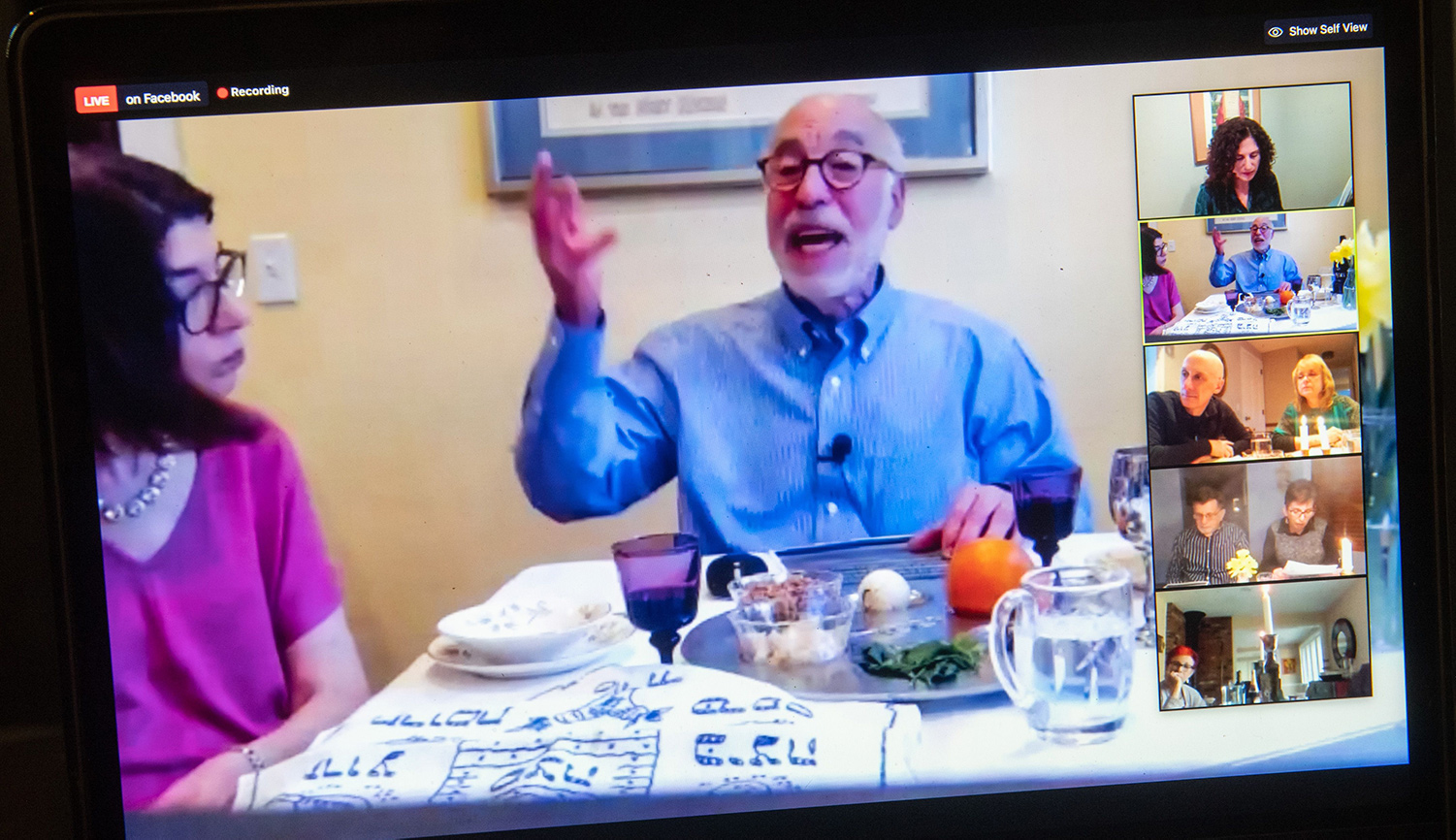 A rabbi hosts a virtual community seder on Zoom during the first night of Passover on April 8, 2020. SAUL LOEB/AFP via Getty Images.

Response
Shalom Carmy
About the author

I will not address the technical halakhic issues raised by the Zoom seder. Those who rule on such weighty matters, and particularly those who do so in the public spotlight, should be individuals who have earned their halakhic spurs through many years of intellectual work and whose authority derives from a solid track record of dealing with a wide variety of questions in Jewish law. Apart from erudition and experience they must also have insight about the situations and persons their decisions are likely to affect. Lastly, as Chaim Saiman demonstrates in his essay “In Rejecting the Zoom Seder, What Did Orthodox Jews Affirm?”, we have a large specialized literature devoted to the use of electricity, and anyone contributing to it needs to understand the technological mechanisms involved, some of which evolve quickly. As a student and teacher of Torah, I am at best a rabbinic “general practitioner,” and if I have learned anything in the past month from my medical friends it is that good doctors know when to defer to superior expertise.

As Saiman notes, the rabbis endorsing the Zoom seder have two available rationales. One is the overriding obligation to save lives (pikuaḥ nefesh). The implication of this argument is that denying isolated people Zoom contact with family constitutes a danger to their lives. This argument is not prominent in the ruling of the Maghrebi rabbis, perhaps because it seems exaggerated.

I do not mean that the psychological burden of social isolation is negligible. Rabbis and doctors who have spoken to me are painfully aware of the baleful effects on the elderly of emergency regulations that prevent them from having visitors. It is even worse for those who are infected, for they can lose their will to live. Nor do I wish to minimize the importance of family gatherings, not only as an arena of religious education, but as occasions to grow in knowledge and experience love.

I think back to the seders of a lifetime: the uncle with the pleasant voice whose tune for Psalm 136 I never heard from anyone else; the aunt who almost certainly skipped lunch on Passover eve and was visibly impatient with the Haggadah that delayed our meal. I think of seders at which I discovered the customs of non-Ashkenazi Jews; the year we—adults and teenagers—got into an extended discussion of Exodus 13; dancing around the table last year with my host and his sons when it was 2:00 am but we were loath to end. I recall my teacher, Rabbi Walter Wurzburger, telling me repeatedly that he may have forgotten some of the Torah he heard at the seder table of Rabbi Joseph B. Soloveitchik, but he cannot forget the transcendent joy with which his mentor recited Psalms 113-118, known in the liturgy as the Hallel.

It is painful to demand that anyone accustomed to such seders forgo them even once when reflecting on life’s limits. The children will grow up. And, as we ourselves will not be around forever, we only have a limited number of Passovers before us.

And yet, the vast majority is not imperiled if, for one year, they cannot have their customary seder. Life does not always adapt itself to our preferences or our perceived needs. Even without a pandemic, family members sometimes make other arrangements.

And in the heartbreaking acceptance of such disappointment lies a deeper theological insight. Judaism is not only a religion of fulfillment and positive realization. The very holidays and sabbaths that we anticipate with delight and joy are also times of self-discipline. When normative restraint conflicts with our desires, even and especially legitimate ones, we must be prepared to undertake self-denial and sacrifice. Over the course of our lives we give up many valuable things for the sake of worldly ambition or, at this time of social-distancing, for the sake of our own and the public’s health. Excepting cases of genuine danger, we can survive giving up something we have good reason to want in order to avoid an uncertain halakhic maneuver.

Saiman focuses on the argument at the heart of the Maghrebi rabbis’ ruling, which is that prohibiting the Zoom seder would deny the younger generation the opportunity to experience any seder whatsoever. In other words, the purpose of the ruling is not to protect the welfare of the older generation but to instill faith in the young. This line of reasoning presupposes that there is no alternative to the Zoom seder for those to whom the proposal is addressed. Presumably the young people discussed here have a rather thin religious background, and what they do have is liable to wither away unless they attend this year’s Zoom seder.

Is this true? When I was a child, day schools and synagogues sponsored what was called the “Model Seder.” Either the school or the shul conducted a kind of dry rehearsal for the seder itself. The idea was to give children, whose parents’ commitment or interest was often limited, or who had missed the opportunity to learn in their youth, a sense of what it was all about, and to help the parents make up for the gaps in their education. Such educational endeavors are much more accessible today on social media. Under lockdown it is easier for everyone to find the time to convene before the holiday. For the old and for the young, the benefit of social connection the week before Passover would not be different than it would be on the festival itself. The religious message would be the same. Only the matza, the wine, the maror, and the calendar date would be virtual and there would be no need to come up with controversial, questionable and quite possibly distracting reconfigurations of the holiday itself.

The Zoom proposal also appears to assume that it is the older family members, that is, the grandparents, who can transmit the heritage at the core of the seder. Indeed, as I indicated earlier, family closeness between the generations is a magnificent part of Jewish life and of human existence. It is a great thing when a grandparent of seventy can speak to a grandchild of seventeen, and even nobler when the subject is the birth of the Jewish people and its liberation for the service of God. But what about the intermediate generation, the parents? What is their part in communicating the story of the exodus?

If the proponents of the Zoom seder know their customers, then a discouraging answer lurks beneath the surface. The parents may be lackadaisical and passive; the religious convictions that underlie Passover, as opposed to the sense of communal solidarity, may be remote to them; their own parents may have been unable to give them adequate education. Or, for a combination of these reasons, they may be victims of a “learned helplessness” and a “learned incompetence” and so they cannot imagine themselves conducting their own seder and they then outsource to their more traditional parents the task of transmitting to their children such Jewish commitment as they possess.

The families who would opt for the Zoom seder no doubt consider it preferable to any alternative, whether for social or educational reasons. They are traditional enough to desire some sort of rabbinical imprimatur for their choice though it is likely that without such approbation they would go ahead and act on their private judgment. Whether or not the proposal is acceptable in halakhic terms, whether or not it is the best educational policy, I will leave to those with appropriate expertise. However, I cannot help asking whether it is an approach that is likely to foster sustained faith and commitment, or is instead an acknowledgement of generational failure—a stopgap measure to keep nostalgic religious affiliation afloat.

I am skeptical about whether the Zoom seder, even if it turned out to be halakhically defensible, can do much to remedy the educational weaknesses and the cultural and psychological passivity that its defenders genuinely want to ameliorate. Our faith may be better served through less spectacular, more traditional approaches.

Ruth R. Wisse
May
In Rejecting the Zoom Seder, What Did Orthodox Jews Affirm?
2. Response

In Rejecting the Zoom Seder, What Did Orthodox Jews Affirm?
3. Response

Why Sephardi and Mizrahi Approaches to Jewish Law Were Friendlier to the Zoom Seder
4. Response

Does Virtual Seeing Count as Seeing under Jewish Law?
5. Response