By winning wars and becoming sovereign, the Jews of the Middle East have inverted the regional order of things, and been spared the fate of other native minorities. 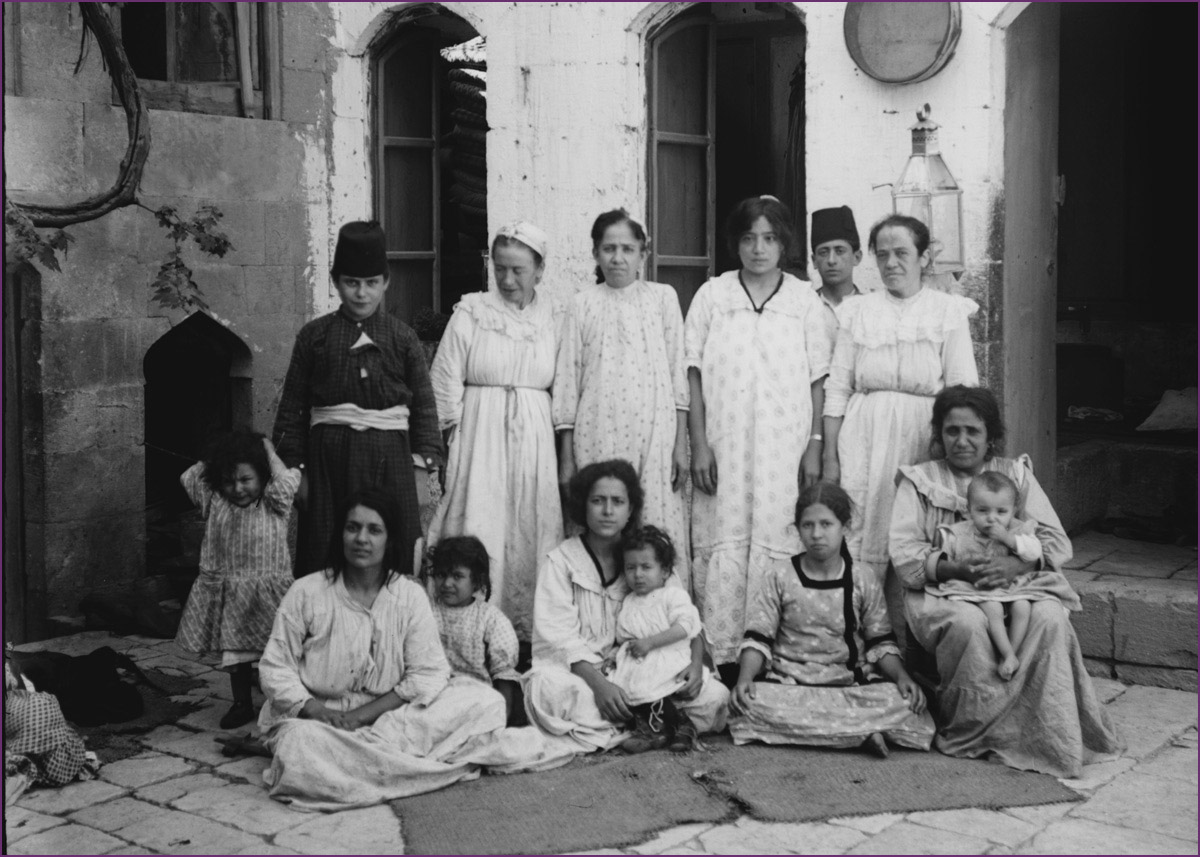 A poor Jewish family of Aleppo in the early 20th century. Library of Congress.
Response
Matti Friedman
About the author

I was thrilled to have two such outstanding writers and scholars as André Aciman and Aryeh Tepper respond to “Mizrahi Nation,” and I’m grateful to each of them. I’ll offer a few brief comments on their contributions, but I’d like to begin on a different, if related, note.

Over the past few weeks, in a part of Iraq that is closer to my home in Jerusalem than Detroit is to New York, a fanatical strain of Islam has executed an astonishing advance, butchering other Muslims and forcing the further exodus of native minorities like the Christians of Mosul. Some Christians from Mosul have taken refuge in the hills with the Chaldeans, members of a tiny Christian group with their own language and culture, whose future amid the extreme sectarian violence in Iraq is likely to be brief. Other native Iraqi sects, like the Yazidis, have seen entire villages destroyed. Syrian cities like Aleppo and Homs, home to some of the oldest Christian communities in the world, have been devastated and those communities displaced.

One of the biggest stories in the region in the past century—the disappearance of the old cosmopolitan mosaic that always found a way to exist under Islam but no longer can—has now picked up speed to an extent that would have been hard to imagine even two or three years ago. Soon these communities will all be gone, and one of the great cultural losses of our times will be complete.

As it happens, about an hour before sitting down to write these lines I was speaking with a grandson of the Levi and Barazani families of Mosul. That city houses what is traditionally held to be the tomb of the prophet Jonah and is associated with the biblical Nineveh; its ancient Jewish community left en masse for Israel in the 1950s. He called to speak about another matter, but we spent a few minutes being thankful that the Jews were removed in time to spare them the fate they would have met this month.

In my Mosaic essay, I wanted to bring the Jews of the Middle East into the heart of Israel’s story. But I was also trying to make the point that Israel itself is part of the Middle Eastern story—and not just because it has fought wars with Arab states. When one looks at the recently exiled Mandaeans, Zoroastrians, Christians, and others, the Jews displaced by Muslims from their ancestral homes beginning in the mid-20th century begin to look more and more like the proverbial canary in the coal mine. This is a role that Jews have often played in different parts of the world.

Are you an ethnic or religious minority that wishes to survive in the Middle East? You had better have a piece of land in which you are the majority, and the power to defend it. This is the lesson of the Kurds, as has been vividly brought home this past month, and it is the lesson of Israel.

The Jewish state is as imperfect as any state, and is not an Eden of religious tolerance and harmony. But with its growing populations of Middle Eastern and European Jews, Sunni Muslims, Arab Christians, and Druze, with its synagogues, Baha’i shrines, and Eastern, Catholic, and Protestant churches, it serves as one of the last minority bulwarks in a region that seems intent on expelling its minorities or consuming them alive. Israel is an intolerable affront to so many of its neighbors, and has been long before 1967 or (for that matter) 1948, not because Jews are foreign here but in large part because they are not foreign—they are a familiar local minority that has inverted the order of things by winning wars and becoming sovereign.

None of this will be easily apparent to anyone still trying to understand Israel through the old Hebrew folksongs, through the saga of the Zionist pioneers, or through the lens of colonialism. Israel is different from what its European Jewish founders imagined, and I think it is fine, in 2014, to say this and to say it without regret. Israel is in the Middle East, its population is largely Middle Eastern, and its culture and society increasingly reflect those facts. It is a Jewish state—and Jews are native to the Middle East. I hope that my essay made a modest contribution to advancing this proposition, which I believe should shape our understanding of Israel in the 21st century.

With this, I turn with gratitude to my two respondents, both of whom understood perfectly what I was getting at.

I learned a great deal from Aryeh Tepper’s description of the world of Torah study, Middle Eastern-style, and the ways in which it differs from that of Eastern Europe. It is a shame that the scholars cited by him were marginalized, and that they did not have an opportunity, earlier in Israel’s history, to lead mainstream Jewish practice here in a different direction from the one it has taken: a direction at once traditionalist but also, in Tepper’s suggestive phrase, “more relaxed.” I would like to see the country open itself further to this and other moderate strains of Judaism, and I would like Israelis to feel that they can enter their religion through any door they choose.

The broader Jewish revival under way in the country, which has been much commented upon, will continue to make room for new pathways of access to Judaism. Middle Eastern traditionalism, complete with its surprising threads of contrarian thinking (of which Tepper offers a number of striking examples), can provide an authentically Israeli alternative to a stringent, anti-modern Orthodoxy on the one hand and, on the other, the wholesale abandonment of Jewish tradition that marks a few generations of secular Israeli Jews. If the rabbis mentioned by Tepper, and their students or their students’ students, can provide a different religious voice, I believe they will find many eager to listen.

In his own tough-minded and elegant response, André Aciman quite rightly puts in a good word for French and British colonialism. I thoroughly agree that it was not all bad, and certainly not for minorities like Jews in places like Algeria and Egypt—and certainly not, more broadly, when compared with what has happened and is happening in the region since the colonial powers left.

But have Jews really gone completely “Down the Middle East Memory Hole,” to invoke the title of Aciman’s essay? My own impression differs. Awareness of the historical Jewish presence in Arab and Muslim lands varies from place to place, no doubt, and is naturally fading with the passage of time. But in my travels around the Middle East I’ve been surprised at the frequency with which Jews are mentioned without prompting.

In the town of Chefchaouen, Morocco, someone (without knowing I was Jewish) informed me that a shade of blue still in use on the outer walls of the town’s homes originated with the Jews; they were gone, but their blue remained. In 2010, during a brief stint working on the AP’s regional editing desk in Cairo, I happened to mention the great Cairo Jewish philosopher Maimonides, and a colleague in his early thirties, a Sunni refugee from Iraq, knew exactly whom I meant: Mussa ibn Maimun, Saladin’s Jewish doctor. A central part of Cairo, itself the center of the Arab world, is still referred to by all residents as the Jewish Quarter. Or to draw an example from literature: in the 2008 novel The Calligrapher’s Secret, the Syrian-German author Rafik Schami mentions the existence of a Jewish quarter in Damascus in the 1950s as early as page 2.

The American writer Stephanie Saldaña, who lived in Damascus several years ago, offers a touching description of the lingering presence of Jewish non-existence in the Arab world. The Damascene Jews, she has written, came up often in her conversations with merchants, some of whom would recall the Jews’ houses and shops, the rhythm of their metal-working hammers. “They had been there so long that the neighborhood couldn’t quite forget them,” Saldaña attests. “Any traveler in the Arab world today is familiar with these absences, which seem to cast a shadow over otherwise ordinary afternoons.”

From now on, as we know, the Jews will not be the only ones haunting afternoons in the Middle East—there will be many other shadows as well.

Matti Friedman is the author of The Aleppo Codex: In Pursuit of One of the World’s Most Coveted, Sacred, and Mysterious Books, which won the 2014 Sami Rohr Prize, the ALA’s Sophie Brody Medal, and the Canadian Jewish Book Award for history. He has been reporting on Israel since 1997.

From Mosul to Jerusalem
1. Essay