How English Words Get Entrenched in Israeli Speech, and How to Get Them Out

Why the Hebrew word for “shaming” (as in “Facebook shaming”) should not be sheyming. 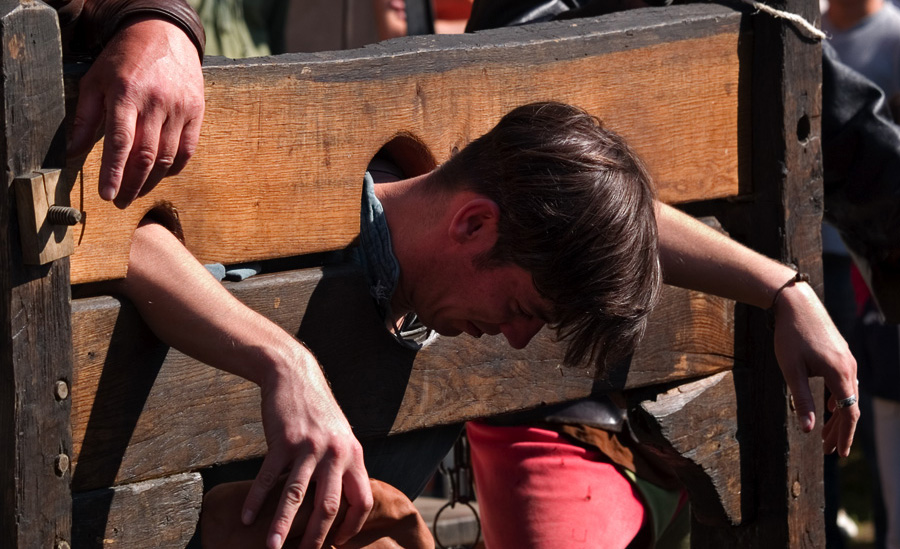 “What Is ‘Hashtag’ in Ancient Hebrew?” asks the title of a July 30 article by Isabel Kershner, the Israel correspondent of the New York Times. “Although Israelis,” she writes,

pride themselves on the revival of ancient Hebrew, . . . this high-tech nation can find itself at a loss for contemporary terms. The venerated Academy of the Hebrew Language is always working to update [Hebrew’s] vocabulary. . . . Among the academy’s latest crop, announced on Twitter this month, were Hebrew words for shaming (biyush, an outgrowth of an existing verb, to shame), hashtag (tag hakbatzah—literally, group tag), and big data (n’tunei atek).

Of course, there could no more be a word for hashtag in “ancient Hebrew” than there could be a word for smartphone in ancient Greek, but let’s not nitpick the title given to Kershner’s article by her editors. Rather, let’s talk about the fate of the many thousands of neologisms like biyush, tag hakbatzah, and n’tunei atek that the Academy of the Hebrew Language, an official government body established in 1953, has come up with over the years.

Take biyush for shaming, a perfectly logical choice, since there is, as Kershner observes, a Hebrew verb, biyesh, that means to shame. Indeed, an academy of language should hardly have been needed to coin biyush, since native Hebrew speakers, one would think, would instinctively have resorted to it on their own. And yet how is shaming referred to today by the Israeli public and media after the Academy’s proclamation of biyush, which was actually announced last April? Although one does come across biyush here and there, nearly all Israelis continue to say sheyming. Moreover, they may continue to say it for a long time to come.

This is something not sufficiently taken into account in discussing the coining of words by official bodies tasked with updating national languages and keeping them from being flooded by the foreign, mostly English, vocabulary by which the social, cultural, and technological novelties of our times are most frequently expressed. It’s relatively easy, in any language, to invent a new term for something—fun, too, if you’re a linguist, scholar, or expert of some kind sitting on a committee with other linguists, scholars, and experts. It’s far more difficult to see to it that the term you’ve voted for gains public acceptance.

There are several reasons, to return to the case of biyush, why an Israeli encountering it does not immediately say, “What a perfect word for shaming! I’m going to use it from now on.” One is force of habit. If you’re used to saying sheyming (the English word, in its social-network sense, goes back at least several years), you can’t suddenly switch to biyush without feeling rather strange. Yes, it’s genuine Hebrew, and Hebrew is your language; but you’ve been saying sheyming for so long that it seems the more natural of the two words.

And it’s not just you. Your friend to whom you say “Did you hear of the latest biyush on Facebook?” may make a face that means, “What kind of word is that?” Or it may mean, “If you mean sheyming, why don’t you say sheyming?” Or else, “I never thought you were such a follow-the-leader type! Someone tells you to say biyush and you fall in line!” Whichever it is, you’re likely, Hebrew lover though you may be, to find yourself saying, “Did you hear of the latest bi . . . sheyming on Facebook?”

It would be different if, informed of the Academy’s decision, the Israeli media were to make a concerted effort to adopt biyush. Were the Hebrew press, television, and radio to do this, the word’s chances of catching on would be much better. Indeed, in the Academy’s first decades, when concern with “proper” Hebrew was considerably greater than it is today, this is what would have happened. Today, though, you will see and hear words like sheyming used by Israel’s media almost defiantly, as if to say: “Enough of this linguistic nationalism! We’re sophisticated, cosmopolitan people and we don’t ask the words we use to show us their passports!” A word like sheyming is bon ton: it shows one is a citizen of the world. Let Likud voters say biyush if they want to!

There are Hebrew linguists who agree. All languages, they argue, borrow words from other languages. In our age, the lender is most often American English because we live in a world of global culture and technology of which English is the linguistic cutting edge. The French grumble about Franglais, the Spanish about Spanglish, the Japanese about Wasei-Eigo, but in the end all learn to live with English loanwords instead of tilting at windmills by trying to eliminate them. Hebrew should do the same.

But this is missing the point. Every language is a case in itself. Some languages are morphologically and grammatically close enough to English to assimilate English words easily: if Frenchmen say le parking, the word may irritate the French purist but it has absolutely no effect on the sentence in which it’s embedded. Other languages, like Japanese, naturalize such words to suit their own idiosyncratic phonetic or grammatical structure. You would never know from the sound of them that Japanese gasorinsutandu comes from “gasoline station” and aisukyandi, an ice-cream pop, from “ice candy.”

Hebrew, like Japanese, is structurally very different from English, with not only a well-defined phonological system but verbal roots that are inflected according to regular rules. Hebrew neologisms allow these rules to be invoked. When maḥshev, from the verbs ḥashav, “to think,” and ḥishev, to calculate, successfully replaced kompyuter in the 1960s, it automatically produced such spin-offs as miḥshuv, “computerization,” m’muḥshav, “computerized,” and so on.

No such thing can be done with sheyming. It’s unproductive. It can’t be integrated into the system of Hebrew grammar. It’s an environmental eyesore. It remains, not a sign of cosmopolitanism, but a bone stuck in the language’s throat like numerous other English loanwords in Hebrew.

This is why biyush is objectively, politics and worldviews aside, a great improvement. Yet only time will tell if it makes the cut. Many of the Academy of the Hebrew Language’s neologisms fail to do so, whether because they are too unwieldy (tag hakbatzah, it can safely be predicted, will never replace “hashtag”), introduced too late in the day, or not pushed enough by the media. Once an English word gets entrenched in Israeli speech, it can be all but impossible to dislodge it. A little shaming of those not using biyush might not be a bad idea.

How English Words Get Entrenched in Israeli Speech, and How to Get Them Out