In part, it borrowed extensively from the slangs and vernaculars of other languages. Consider the case of de la shmatte. 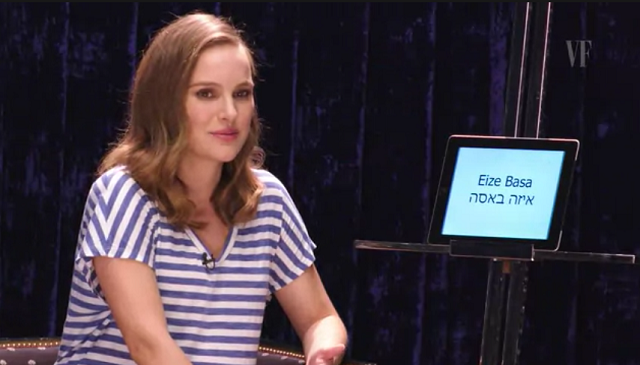 My grandmother had a word takhlis. [Mr. Eichler spells the word in Hebrew/Yiddish characters as טאכלעס.] She’d use it in sentences like, “It’s time for takhlis,” which meant she was about to sit us down and give us a good talking-to. I never understood precisely what that meant. Do you happen to know?

Takhlis is Yiddish for practical matters or for the practical side of something, as in a sentence like lomir redn takhlis, “Let’s talk takhlis,” that is, “Let’s get down to business” or “Let’s get down to brass tacks.” Although, with the stress on its first syllable, it’s pronounced as Adin Eichler wrote it, following the rules of Yiddish spelling, you won’t find it spelled that way in a Yiddish dictionary. This is because it comes from the Hebrew word takhlit, spelled תכלית, with the stress on the last syllable. The rule in Yiddish is that all Hebrew-derived words retain their Hebrew spellings even if that is not how their sounds would ordinarily be represented in Yiddish. And yet in writing takhlis in Hebrew today, it is often Yiddishized as תכלעס (sometimes elided into תכל’ס).

In short, Yiddish uses the Hebrew spelling and Hebrew uses a partly Yiddish spelling. Paradoxical, no?

Not really. When given its Yiddish pronunciation, takhlis in Israeli Hebrew is a slang word that means what it meant to Mr. Eichler’s grandmother. “Let’s get down to business” is bo n’daber takhlis. Pronounced takhlit, on the other hand, the word is standard Hebrew and means “purpose,” “goal,” or “end.” Eyn la-zeh takhlit: “It has no purpose”; hu adam takhliti: “He’s a purposeful [i.e., practical-minded] person.” Etc.

Takhlit comes from the verbal root k-l-h, “to come to an end,” and is familiar to many of you who do not speak Hebrew from the Adon Olam hymn recited at the beginning of the daily morning service and sung in synagogue at the conclusion of the Sabbath morning service. God, the hymn says, is b’li reshit, b’li takhlit, without a beginning, without an end. To distinguish takhlis from takhlit when they appear in writing, Israeli Hebrew therefore uses two different spellings—a Yiddishized one for the former, a Hebraic one for the latter.

But takhlit also has its place of honor in Israeli slang. If you want to say “bullshit” in Hebrew, you can say shtuyot, “nonsense”; or you can say bulsheet; or you can say bablat—and bablat is an acronym, born many years ago in the Israeli army, of bilbul beytsim l’lo takhlit, translatable as “pointless [or purposeless] ball-busting.” It’s a fine expression that I would heartily recommend to all students of Hebrew wishing to demonstrate a competence in the language.

It is sometimes asked how Hebrew, which was a purely literary language spoken by no one on a daily basis from antiquity until the beginning of the last century, could develop a full-blown slang in a hundred years. The answer is that it has done so only partly from its own indigenous resources. It has also borrowed extensively—I daresay indiscriminately—from the slangs and vernaculars of other languages.

Bablat and bulsheet are a case in point. The one expression is a racy neologism formed by time-honored Hebrew methods; as a way of coining Hebrew words, acronyms go back to early rabbinic times. The other is an English semi-vulgarism borrowed and sanitized; bulsheet does not strike Israeli ears as being particularly rude or obscene.

And here’s another example, taken from the Israeli daily newspaper Haaretz. In a recent article criticizing the Israeli government’s inept handling of the Western Wall issue, the paper’s U.S. correspondent Chemi Shalev wrote—I’ve retained the italicized words in their original Hebrew—that if American Reform and Conservative Jews “really believed in all the slogans de la shmatte about Jewish unity and mutual responsibility and kol ha-jaz ha-zeh,” they now have had a rude awakening.

Kol ha-jaz ha-zeh is of course English’s “all that jazz,” taken straight from the shelf; if languages could be indicted for shoplifting, Hebrew would go on trial for it. “Slogans de la shmatte,” on the other hand—ah, here one sees the true genius of a native slang at work!

On first consideration, this may seem an odd thing to say, since the expression de la shmatte does not have a native Hebrew word in it: de la is French for “from” or “of” and occurs in many French family names of aristocratic origin like de la Fontaine, de la Montagne, and de la Rochefoucauld, while shmatte (from Polish szmata) is Yiddish for a rag or item of cheap or old clothing.

Shmatte is found, of course, in American Jewish English as well. Put it together with de la, though, and you get something distinctly Israeli. A few of the numerous instances that I have come across lately in speech and writing include: orekh-din de la shmatte, an incompetent lawyer; krem de la shmatte, a fancily packaged but worthless facial cream; ḥayal de la shmatte, a soldier undeserving of the name; sarvan matspun de la shmatte, a hypocritical conscientious objector; and don juan de la shmatte, a hot-air or tinpot Romeo.

This last example, better appreciated when capitalized as Don Juan de la Schmatte, seems to be especially prevalent in Israel and hints, I think, at the expression’s source. In European literature, opera, and legend, Don Juan is an unprincipled but genuinely charming and courageous nobleman and seducer, his name given in some versions of the story as Don Juan de Marana or de Manara—and a Don Juan de la Schmatte is a would-be seducer of false claims and no merits whose clumsy efforts are not worth any woman’s attention. All the lawyers and facial creams and slogans de la shmatte in Israeli Hebrew probably derive from an original Don Juan of the Rag.

But I suspect, although I can’t prove, that de la shmatte goes back farther than that. Jewish lore and humor are full of stories about social-climbing Jews passing themselves off as European aristocrats, and what better last name than de la Schmatte could be given them? There is a tale, for instance, about the Baroness von Hohenheim, née de la Chaumette, whose time to deliver her firstborn child has come. The local doctor, a Jew, examines her in her upstairs bedroom, tells her husband the baron that she is in an early stage of labor, and sits down to play a game of chess with him. After a while, the baroness lets out a groan. “It’s your move,” says the doctor to the baron. “But doctor, aren’t you going to deliver my wife?” the surprised baron asks. “Ah, it’s still too early for that,” replies the doctor.

Time passes and the woman moans in French, “Mon dieu, mon dieu!” The baron jumps to his feet. The doctors goes on sitting. “It’s your move,” he says. More minutes go by and there comes the cry in German, “Gott in Himmel!” The doctor stays seated. “Doctor!” the baron protests. “It’s not time yet,” the doctor assures him.

Suddenly there is a chilling scream in Yiddish: “Gotenyu!” The doctor pushes away the chess board, reaches for his bag, and gets to his feet. “At last,” he says to the baron.

That was a Baroness de la Schmatte!