The Hebrew of the Bible has many more ands than does modern English prose, a feature that’s surprisingly crucial to its literary power. 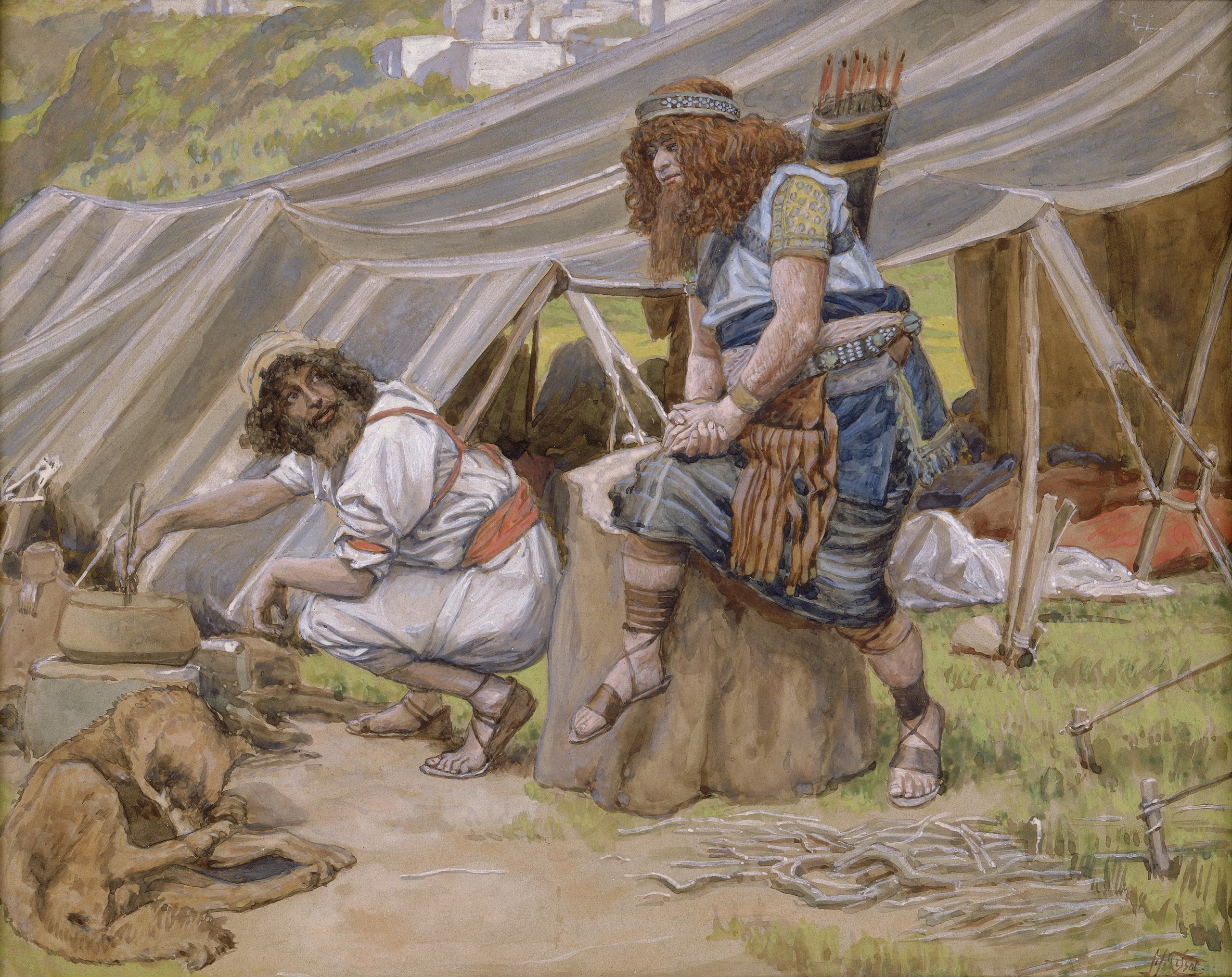 In my previous column, I discussed an unconventional though not unprecedented feature of the new Koren Tanakh recently published in Jerusalem, namely, its spelling of proper biblical names according to their Hebrew pronunciation, as in “Moshe” rather than “Moses.” At the column’s end, I promised to deal with a second such feature the next time. Let’s now do this, using as our prooftext a passage from last Shabbat’s Torah reading of Yitro, the portion of Exodus that tells of the revelation at Mount Sinai. I’ll begin with this passage as it appears in the King James Version—still, after some 400 years, the gold standard in English Bible translation—and then quote it from The Koren Tanakh.

And Moses brought forth the people out of the camp to meet with God; and they stood at the nether part of the mount. And Mount Sinai was altogether on a smoke, because the Lord descended on it in fire: and the smoke thereof ascended as the smoke of a furnace, and the whole mount quaked greatly. And then the voice of the trumpet sounded long, and waxed louder and louder, Moses spake, and God answered him by a voice.

And now the The Koren Tanakh:

Then Moshe led the people out of the camp to meet God, and they stood at the foot of the mountain. Mount Sinai was enveloped in smoke because the Lord had descended on it in fire. Smoke billowed up from it as if from a furnace, and the mountain shook violently as one. As the sound of the ram’s horn grew louder and louder, Moshe spoke and God answered him aloud.

What, putting aside the King James Version’s obvious archaisms, such as “on a smoke,” “waxed louder,” “spake,” and so on, is the major difference between these two passages? It is the little word and, whose meaning and spelling haven’t changed in English in the course of the last millennium. In the passage from the KJV, and occurs nine times. In the same passage in The Koren Tanakh, it occurs only four times. Together with the Hebraization of names, it’s those five missing ands that makes the Koren translation sound unfamiliar on the one hand, and on the other hand, more like normal English prose than the language of the King James.

A paradox? Not for anyone accustomed to traditional English Bible translations, whether the King James Version or any other. All such translations have many more ands than does normal English prose—and they have it because the Hebrew Bible has a similar abundance of the conjunction v’, va, or u, all differently vocalized forms of a prefixed consonant vav that have traditionally been translated as “and.” Indeed, among the first two questions that modern Bible translators have to ask and answer before setting to work are: 1) Should a prefixed vav at the beginning of a word in the Bible always be translated by “and?” and 2) If not, should it sometimes not be translated at all?

One reason that the prefixed vav is so ubiquitous in the Bible is that, as everyone familiar with biblical Hebrew knows, it can have a second function that is not a conjunction’s. This is the marking of tense—or more precisely, the reversing of tense, since it is a peculiarity of biblical Hebrew that a prefixed vav, when attached to a verb, can change its tense from past or perfect to future or imperfect, and vice versa. Thus, for example, in the KJV’s “and the smoke thereof ascended,” vaya’al ashano in the Hebrew, “ascended” is the future verb ya’al, “will ascend,” with the prefix va. And when a bit further on in Yitro, in giving the Ten Commandments, God tells Israel, “Six days you shall work and you shall do all your labor, but the seventh is a Sabbath to the Lord your God,” “you shall do” is v’asitah, the past-tense verb asitah, “you did,” with the prefix v’.

There is no need for our purposes to go into the various explanations that have been offered for this odd phenomenon, which range from the grammatically technical to the quasi-philosophical and from the sphere of historical linguistics to that of metaphysics. Suffice it to say that it can pose a problem in translation. Is the “reversing and,” the vav ha-hipukh of Hebrew grammar, only a tense changer or is it also a conjunction at the same time? To be more specific: should vaya’al ashano be translated (as it is in the King James and all pre-20th century English Bibles) with its “and” or (as is the case in The Koren Tanakh and other 20th-and 21st-century Bibles) without it?

And there is yet another question of translation involving the prefixed vav. Biblical Hebrew has no punctuation (the cantillations it is chanted to in the synagogue are a later development) and is a language poor in conjunctions. Although it has its own ways of expressing logical and temporal relationships between parts of sentences, something that is largely done in English by means of commas and periods, dependent clauses, and conjunctions like “when,” “while,” “as,” “though,” “despite,” and so forth, biblical Hebrew rarely puts together sentences by such means. It prefers coordinate clauses joined by a vav—or, in more technical language, paratactic rather than hypotactic constructions in which the vav can do the work of various English conjunctions and mean other things beside “and.”

For instance: when, in the book of Genesis, Esau sells Jacob his birthright for a mess of pottage, we are told in Hebrew (the prefixed vav appears in bold print), V’Ya’akov natan l’Esav leḥem u-n’zid adashim vayokhal vayesht vayakam vayelekh vayivez Esav et ha-b’khorah—that is, “And Jacob gave Esau bread and lentil soup and he ate and he drank and he rose and he went and Esau scorned his birthright.” The prefixed vav, which functions here as a tense reverser too (yokhal, yesht, yakam, yelekh, and yivez are all imperfect or future-tense verbs), strings together a series of words that English would as a rule connect more variously. One could, to take one possibility, translate the Hebrew into English as, “Then Jacob gave Esau bread and lentil soup, which he ate and drank, after which he rose and went, scorning his birthright.”

Should all of the seven vavs in this verse from Genesis be translated as “and?” The KJV deals with them in moderation, reducing them to five: “Then Jacob gave Esau bread and pottage of lentils; and he did eat, and drink, and rose up, and went his way: thus Esau despised his birthright.” The Koren Tanakh more radically pares them to two: “Yaakov then gave Esau bread and lentil stew. He ate, drank, got up, and left. Thus—Esau disdained his birthright.”

There is a fundamental clash of approaches here. The translators of The Koren Tanakh, like those of some other modern Bibles, would say: “Every language has its habitual modes of expression. Those of English are different from those of biblical Hebrew. For the English reader, all of the Hebrew Bible’s ands, most of which the King James Version reproduces, are monotonous. English has various options for linking words and phrases, of which we have chosen some. One can argue that other choices might have been better but we should all be able to agree that English is a different language from biblical Hebrew and mustn’t be expected to behave like it.”

To this, the translators of the King James Version, as well as of other older Bibles and some newer ones that eschew modernizing strategies, would answer: “Of course English isn’t biblical Hebrew—but that’s missing the point. Much of the power of the Bible’s language lies in features of biblical Hebrew not generally found in English, and this power is lost when these are ignored. Drastically pruning the Hebrew Bible’s many vavs, as does The Koren Tanakh, has such a consequence. When we read ‘And he ate and he drank and he rose and he went and Esau scorned his birthright,’ we are following a series of consecutive acts that express Esau marvelously well—his brusqueness, his impetuosity, his lack of patience for the kind of careful planning that characterizes Jacob. It’s and, and, and, and, and; the man is all action and movement. The Koren Tanakh’s “He ate, drank, got up, and left” could be describing a customer in a café.

The “reversing vav,” the “pro-anders” can contend, is not merely a tense marker. It is a tense marker and an and—a reflection of the biblical sense of human and divine activity, whether staccato-like like Esau’s or building to a crescendo like the revelation at Sinai, as consisting of a series of discrete events, each conjoined to but not determined by or determinative of those surrounding it, each having its own space and making equal demands on our attention, and none deserving of being subordinated to others. Any English translation of the Bible that fails to convey this can be considered a failure.

Robert Alter, a contemporary Bible translator and “pro-ander,” puts it well when he writes in the introduction to his The Hebrew Bible: “The general practice of modern English translators of suppressing the [biblical] ‘and’ when it is attached to a verb has the effect of changing the tempo, rhythm, and construction of events in biblical narrative. . . . The elimination of the ‘and’ in the Revised English Bible, [the most widely used 20th-century reworking of the King James], and in all its modern cousins produces—certainly to my ear—an abrupt, awkward effect in the sound pattern of the language, or to put it more strictly, a kind of narrative arrhythmia.”

To my ear as well. While the Alter translation may have its failings, one of the main reasons that it is in my opinion consistently superior to The Koren Tanakh is that it retains nearly all of the Hebrew Bible’s ands. And without them, the Bible falls flat.