Even his former adviser agrees that the president’s Iran policy is collapsing. Can anything be done, or is it too late? 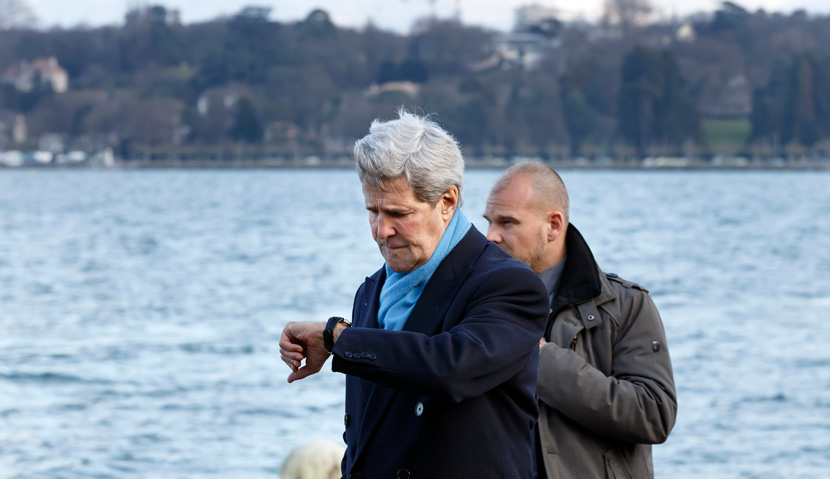 I’ve been stunned by the reception of “Obama’s Secret Iran Strategy.” In this, the era of the 140-character tweet, I’d assumed that a 9,500-word article would have scant appeal beyond a professional audience. Yet, to date, it has attracted 220,000 unique visitors; journalists from several different countries have called to interview me; I’ve done my share of talk radio; and senior political figures, including presidential hopefuls, have expressed their appreciation.

What accounts for the essay’s reach? Timing is certainly one factor. The Iranian nuclear question is coming to a head—dramatically so. But above all I believe that, for many readers, the essay proved useful in solving the enigma of Barack Obama. In his foreign policy, the president has displayed a mix of initiative and passivity that has confounded efforts at categorization. The framework constructed in “Obama’s Secret Iran Strategy” may have helped make sense of a bundle of apparent contradictions; at least I hope so.

In his response to my essay, ” What the President Thinks He’s Doing,” Elliott Abrams graciously accepts most of my analysis but differs with my locating the president’s worldview within the “realist” tradition of American foreign policy. Instead, Abrams sees him as a Henry Wallace radical. In his own response, “The Obama Doctrine,” Eric Edelman observes that Abrams’s view and mine are not mutually exclusive. True enough; it is also entirely possible that Obama finds the realist perspective attractive precisely because it provides him with a politically acceptable cover for his radical commitments. There’s no way of deciding the issue definitively.

Still, I’m not so persuaded as is Abrams that the radical commitments and associations in the president’s past provide the key to understanding his policy in the present. His attitudes, however ingrained, are idiosyncratic, at least in Washington; but in moving the United States substantially closer to the Islamic Republic, he has had the support of an influential segment of the nation’s foreign-policy elite. The list of those sharing the assumptions behind his administration’s Iran agenda is both distinguished and bipartisan, including as it does former National Security Advisers Zbigniew Brzezinski and Brent Scowcroft, former Secretary of State James Baker, and former Ambassador to the United Nations Thomas Pickering—to name just four prominent individuals. If the president’s approach is to be countered, we must first discredit the arguments of these foreign-policy realists, none of whom has a foot in the Henry Wallace tradition.

Indeed, as Edelman points out, all of Obama’s predecessors in the White House since Jimmy Carter have, in one way or another, succumbed to an Iran delusion. This same point was also made by Suzanne Maloney of the Brookings Institution in a February 19 debate with me over my Mosaic essay. Obama’s diplomacy, she argued, has followed a very well-worn path, and in pursuing it he has adopted the same carrot-and-stick approach, and the resort to back-channel diplomacy, typical of presidents before him.

These surface similarities are real enough, but to focus on them is to turn a blind eye to the ways in which Obama has broken with the past. He has entirely jettisoned the policy of containing Iranian expansionism; made massive and irreversible concessions on the nuclear issue; and, most important of all, placed reconciliation with Tehran at the top of his foreign-policy agenda. No other president has advanced such overtures to Tehran. If Obama’s break with the past is less than total, it has not been for want of effort on his part.

Suzanne Maloney also charged me with exaggerating the element of secrecy in Obama’s actions—and in “The Reform Delusion,” my respondent Reuel Marc Gerecht strongly agrees. Here, however, the facts speak for themselves. Obama was able to reach the November 2013 interim nuclear agreement with Iran only by working behind the back of both Congress and America’s major allies. When he finally made the deal public, he disingenuously claimed that it had “halted” the Iranian nuclear program. To that particular claim, the Washington Post’s “Fact Checker” column awarded three (out of a possible four) “Pinocchios”: that is to say, it contained “significant factual error and/or obvious contradictions.”

Similarly deceptive has been Obama’s stated policy toward Iran’s client Syria. For years, the president has repeatedly insisted that he is working to remove Bashar Assad from power. Amid much fanfare, he has approved programs ostensibly designed to build up the Syrian opposition to the Assad regime. In practice, however, these programs have amounted to very little. Meanwhile, the president has privately assured the Iranian Supreme Leader, Ali Khamenei, that the United States will do nothing to weaken Assad. What word if not “secret” better describes the deliberate pursuit of a private policy that nullifies publicly stated aims?

Gerecht also rejects my suggestion that Obama is operating on the basis of an actual strategic plan. In his view, the policy has been much more haphazard than that. On this point he is joined (somewhat incongruously, given their other differences) by Martin Indyk, the director of foreign policy at Brookings. In “A Return to the Middle Eastern Great Game,” Indyk contends that Obama has taken a holiday from any attempt at organizing a consistent American approach to the region. Citing my essay in order to dismiss it, Indyk paints a portrait of Obama as a law professor who treats the issues of Syria, Iraq, and Iran’s nuclear program as separate cases, devising policy toward each without reference to the others. The president, he writes, refuses “to connect the dots.”

As it happens, in “Obama’s Secret Iran Strategy” I produced many examples of Obama doing nothing but connecting the dots, and additional evidence to that effect continues to accumulate. For example, a recent Wall Street Journal report quotes senior American officials fearful that any effort to build up the opposition to Assad in Syria would provoke retaliation by Iran to take American lives in Iraq. “You cross a red line in Syria, you start to infringe on what Iran sees as its long-term interest, and those [Tehran-controlled] Shiite militias [in Iraq] could turn in the other direction,” one official says. It is precisely such reasoning that, I argued in my essay, has led Obama to coordinate with Iran behind the scenes.

Indyk emphatically rejects the notion of any such linkage. Indeed, should we fail to reach an agreement with Tehran on its nuclear program, he writes, “it is impossible to imagine cooperation with Iran on regional issues.” Yet no sooner does he assert this than he contradicts it by providing a fresh example of Iranian-American coordination: “Iran’s tacit cooperation with the United States to remove Nouri al-Maliki from power in Baghdad,” Indyk informs us, “proved critical to the viability of America’s strategy against ISIS in Iraq.”

But let’s suppose for a moment that I did exaggerate the extent to which Obama has recognized an Iranian sphere of interest in Syria. What’s striking to me is that Indyk’s analysis still concedes the most important point of all—namely, that Obama’s policies have indeed facilitated the rise of Iran across the Middle East. In the chaos that now engulfs the region, he writes grimly, the United States stands at a crossroads. It must choose immediately between two distinct and opposite strategies: conceding Iran’s dominance and building a condominium with it, or supporting America’s traditional allies against it. In Indyk’s telling, Obama’s mistake lies in his refusal to choose. But why are we standing in front of such a choice if not because we have, willy-nilly, empowered the revolutionary regime in Tehran to its position of dominance?

It seems, then, that on the central issue, Martin Indyk and I are in complete agreement: whether or not on the basis of a strategic plan, the president has placed the United States on a disastrously wrong track. And Indyk and I are again in agreement on what must be done, for, as he convincingly shows, by far the sensible and necessary option is to support America’s traditional allies in a great effort to begin undoing the damage and restoring regional order.

I would like to believe that Indyk’s urgency is a symptom of a growing awareness of the challenge before us in other influential quarters as well. If “Obama’s Secret Iran Strategy” has helped foster that awareness, it has performed its primary duty.