An ideological aversion to American power is at the core of the president’s foreign policy. 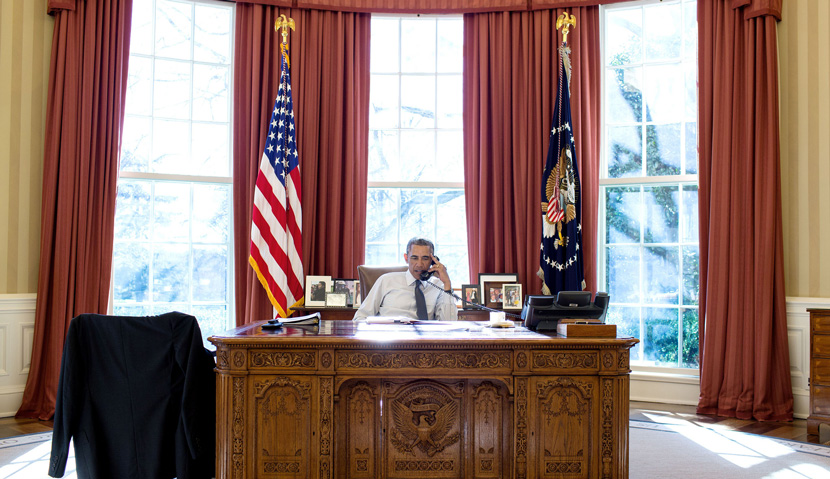 Response
Eric Edelman
About the author


Eric Edelman, a former Under Secretary of Defense for Policy and former U.S. ambassador to Turkey, is Hertog distinguished practitioner in residence at the Johns Hopkins School of Advanced International Studies.

Michael Doran’s long essay in Mosaic, “Obama’s Secret Iran Strategy,” and Elliott Abrams’s response to it, “What the President Thinks He’s Doing,” command the attention of anyone seriously interested in the administration’s policies and plans for the Middle East. I agree with Abrams that Doran’s analysis is superb, and that “no one has more persuasively explained the connections” among the various parts of the Iran policy being pursued by the White House.

I’m also in broad agreement with Doran’s conclusion: namely, that “the only way to salvage the West’s position in the nuclear negotiations is to regain the leverage that the president’s deferential approach has ceded to Iran.” As I testified in late January before the House Committee on Foreign Affairs, rather than actively seeking Iran’s partnership, the United States must be willing to compete with it:

On one level, this requires a change in tone. The administration must emphasize its readiness to exert more pressure on Iran instead of exerting pressure on Congress with talking points that come “straight out of Tehran,” according to a ranking member of the Senate. On another level, the United States must respond more robustly to Tehran’s ongoing efforts to shift the balance of power in the Middle East. Rather than asking its cooperation and blessing—especially in Iraq and Syria—the United States should undertake every possible effort to isolate Iran in its own backyard.

Concerning one point, the origins of Obama’s “secret” strategy, Abrams takes issue with Doran, suggesting that they can be found less in the work of the Baker-Hamilton Iraq Study Group, whose report was issued in 2006, than in Obama’s overarching, “progressive” aversion to American power and its uses in the world, an ideological stance that connects many points of reference in the president’s life from Henry Wallace to George McGovern to Reverend Jeremiah Wright to Bill Ayres and Bernadine Dohrn. That both Doran and Abrams are correct, each in his own way, emerges from an examination of the White House’s larger global strategy. This, as it happens, is the subject of an excellent new study, The Obama Doctrine, by Colin Dueck, forthcoming from Oxford in May.

In Dueck’s judgment, Obama’s approach to the world is predicated first and foremost on his bedrock intention to be a “transformational” president. The transformation in question is largely domestic—hence his preoccupation with the Affordable Care Act, which remakes a rather large swath of the American economy. Abroad, and in aid of the main focus on his domestic agenda (“nation-building at home”), the president’s overwhelming objective has been to keep international affairs at bay. But when world events do inevitably impose themselves, Obama is no less confident of his unique ability to exert a transformational impact. “I don’t really even need George Kennan right now,” Doran quotes him as saying, an attitude fully in keeping with his expressed view that “I think that I’m a better speechwriter than my speechwriters. I know more about policies on any particular issue than my policy directors. And I’ll tell you right now that I’m gonna think I’m a better political director than my political director.”

How, then, does the president mean to execute his global transformation? As Dueck sees it, the strategy is twofold: retrenchment, and accommodation. Retrenchment means liquidating some of what Obama construes to be overinvestments the U.S. has made around the world, particularly in the Middle East, while also reducing the strength of the U.S. military—since, in his view, our temptation to resort to military force has itself been responsible for many of the world’s ills. Accommodation, in turn, means reaching out and “engaging” America’s adversaries, thereby turning them, in the common phrase, from part of the problem into part of the solution.

Understanding this strategy of retrenchment and accommodation is a useful vehicle for explaining many apparently discrete episodes in Obama’s tenure, from the early “strategic reassurance” of China, to the “reset” of relations with Russia, and of course to the “open hand” approach to Tehran that Michael Doran dissects so well. It also clarifies the chronic neglect of allies, and it illuminates, as Abrams rightly underlines, the president’s chronic need—the political equivalent of Tourette syndrome—to express regret and apologize publicly for past exercises of American power in pursuit of our national interests.

As for the tactical implementation of the strategy in individual cases, that has been delegated to individuals like Deputy National Security Adviser Benjamin Rhodes, who helped write the Iraq Study Group report. Doran, it seems to me, is correct to see that document as key to grasping the administration’s Iran policy, and to the coherent, step-by-step unfolding of that policy, though perhaps less so to understanding the larger strategy as a whole.

Is any of this a “secret,” as Doran suggests? When it comes to the ultimate sources of Obama’s views and his conduct in national-security affairs, the evidence has been hiding in plain sight since before he was elected. As Abrams points out in his response to Doran, and more extensively in a profound essay, “The Citizen of the World Presidency,” in Commentary (September 2013), those sources were implicit in the president’s personal history and in his various mentors and associates as he came to political maturity. Moreover, he and his acolytes have continued to articulate his ideas in public documents and, usually without attribution, in comments to the press. Doran’s essay itself is replete with such quotations from Obama and his staff.

In the case of Iran, the veil of secrecy has descended not over the conception or expression of Obama’s strategy but over his diplomacy, which Doran masterfully untangles. But that, in and of itself, does little to distinguish him from other presidents. Nor, in itself, is the outreach to Iran a new thing in our politics. As Secretary of Defense Robert Gates used to say, every administration since Jimmy Carter’s has come a cropper in the vain search for Iranian moderates.

What distinguishes Obama is the ideological aversion to American power and the formulation of a strategy whose overriding impetus is to constrain that power. The scandal is not that the administration has kept this a secret but that a supine press and intellectual class have failed—“declined” may be the better (if much too polite) word—to explain it to the American people.