Addicts Do Need to Get Right with God, but That Doesn't Mean They Need Religion

The tools of religion can help; but, like the tools of science, they can also harm. 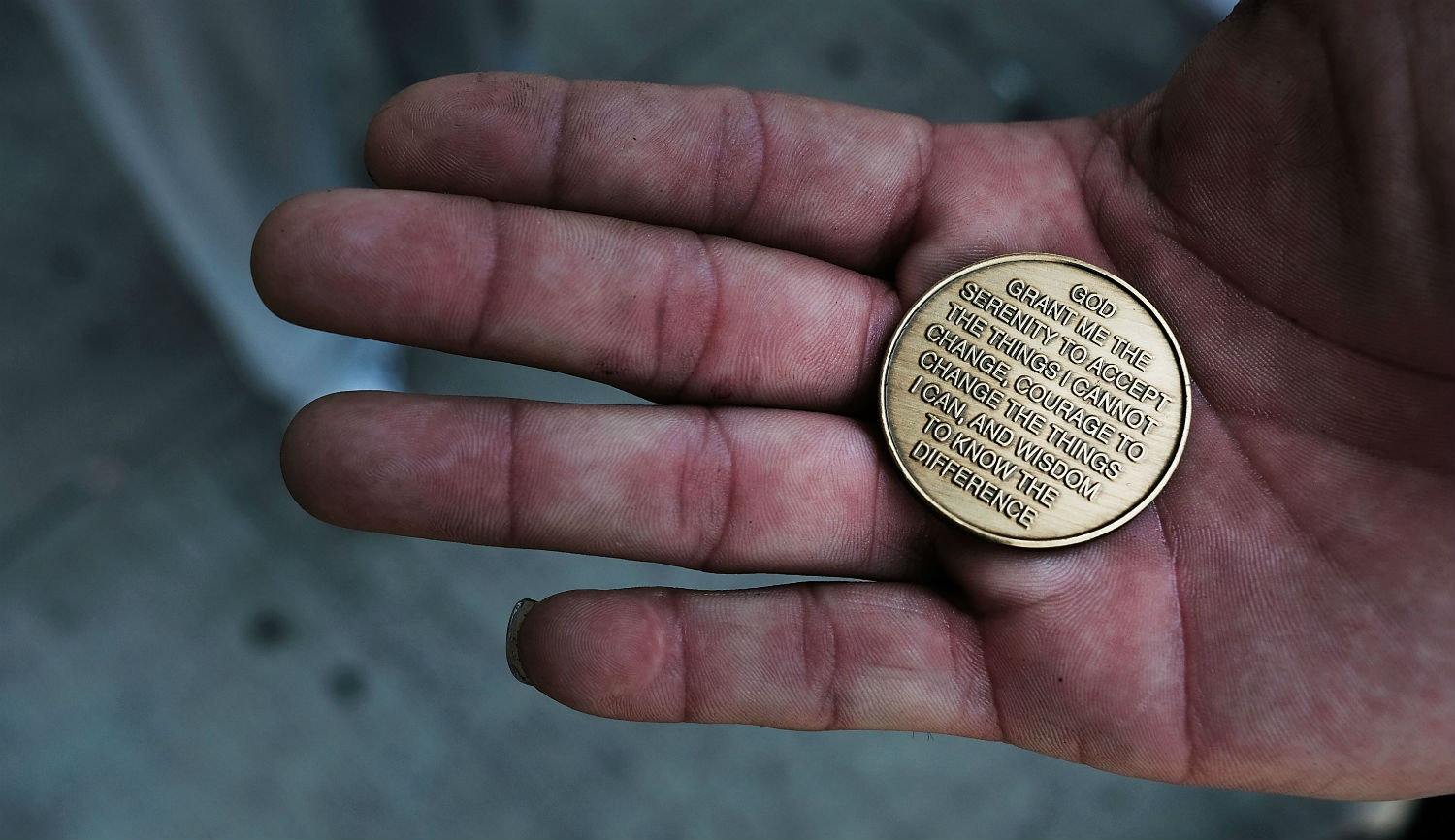 A patient at a Brooklyn methadone clinic holds a coin with the Serenity Prayer on it. Spencer Platt/Getty Images.


Jeffrey Bloom is a graduate of the University of Chicago and the co-editor of Strauss, Spinoza & Sinai: Orthodox Judaism and Modern Questions of Faith.

I’m very grateful to Christopher Caldwell, Paul McHugh, and Tevi Troy for their wise and thoughtful responses to my essay. To Christopher Caldwell I’m especially indebted for “American Carnage,” his essay in First Things about the opioid crisis, which really opened up the subject of the spiritual implications of addiction and prompted me to organize my own thoughts on the topic.

In his comments in Mosaic, Caldwell writes that I am “defending a religious approach to treating drug and other addicts.” This is an understandable way of putting things, but it makes me realize that I have to do a better job of explaining myself. The approach I’m defending is in fact not so much “religious” as—to resort to a much overused and abused term—spiritual. Let me try here to draw the distinction between the two, which strikes me as a crucial one, and to do so first by means of an illustrative quotation.

Instead of pride make modest humility your characteristic, that genuine humility which feels itself really dependent on God with all that it has; which looks upon itself as poor and as rich only in God, and therefore regards everything as being a means lent to it for carrying out God’s will. This is the humility that recognizes itself as having been presented to the world and not the world as having been presented to itself, in order that it may bring to every creature with which it comes into contact as much blessing as God lends it strength to produce, and therefore sees in this its only claim to existence.

In fact the quotation is by the Orthodox German rabbi Samson Raphael Hirsch in his book Horeb, written in the mid-19th century. My point is simply that it expresses a generic, universal point of view that might easily have been voiced, in the same words, by a non-Jewish thinker similarly disposed.

Hirsch himself comes back time and again to the archetypical figure of the Mensch-Yisroel—his term for the individual who fulfills his obligations as, simultaneously, a human being and a Jew. At one point, he likens the two sets of obligations to two musical scales, one of which represents what is incumbent on the Mensch and the other what is incumbent on the Yisroel.

Of course, Hirsch’s view is not the only or even the definitive Jewish formulation of the issue, but I believe it helps frame the difference between spirituality and religion. In brief, the Big Book, which introduces AA’s twelve-step program of treatment, articulates what I consider to be a profound spiritual approach to the problem of addiction, and I would thus place it firmly within Rabbi Hirsch’s first octave.

Caldwell is correct: the addict needs to get right with God. But that doesn’t mean he needs religion. It means he needs the kind of spirituality that turns the prideful man who believes the world is “presented to him” for his use into the man of humility who believes he is “presented to the world” in order to be a source of blessing to others.

With help from many sources, most humans grow from their beginnings as selfish, willful, ignorant, and emotionally incontinent children into competent, coherent, and cooperative adults who at their best bring about, through thought and action, changes that advance opportunity and flourishing for all. Just as their bodies keep going physically, they keep going psychologically.

The spiritual question is how far a person travels from one pole to the other over the course of a lifetime. For an addict stuck in the rut of self-absorption, that journey has stalled out; his state, again in McHugh’s words, is one of “psychic entropy.” Addicts—who as a rule don’t beat around the bush—have been known to put the point as follows: the first rule of spirituality is that there is a God and the second rule is that you are not Him.

In AA’s program, once having finished working the twelve steps and undergone some version of a vital spiritual experience, the addict can then start pondering what else the God of his understanding might want him to do religiously—or not. AA, at least as it is formulated in the Big Book, doesn’t go there. That is beyond its brief.

And here it’s necessary to enter a caution. Caldwell points out that “the tools of reason, science, and common sense,” advocated by critics of AA like Stanton Peele, are “not always accessible to the addict, and may harm him when they are.” Yes, indeed. But the tools of religion can be harmful as well. AA fellowships are full of addicts who have tried to smother their addictions with religion. The effort often becomes another show of self-sufficiency—the problem in the first place—and of narcissism, casting God in the role of a heavenly ATM machine dispensing goodies: if I really, really dedicate myself to religious observance, You will give me health, wealth, and a cure for my addiction, right?

This, incidentally, may be a good place to acknowledge the justice of Caldwell’s charge that I have been unfairly harsh on Stanton Peele, who has played an important role in challenging the dominance of the AA establishment. Caldwell is probably right about that; I think that I was put off by Peele’s aggressive tone. Stepping back, I agree that AA has overplayed its hand in some respects.

For example, as much as I admire the underlying thinking of the Big Book, the notion of mandatory rather than voluntary attendance at AA meetings, which is the rule in some cases despite constitutional challenges to the practice, strikes me as highly problematic. Putting aside the legal questions, mandatory AA meetings seem like an inherent contradiction. To force AA on someone—to tell him he has found a home when he isn’t sure he has—short-circuits the very core of the program: namely, the realization of one’s own powerlessness. This can’t be done for the addict by other addicts, or by an organization. Perhaps an individual comes to meetings, hears the stories, and just can’t identify with the prevailing ethos. Is he “in denial”? Maybe. Or maybe AA isn’t for him. He should be accorded the dignity to make that choice on his own.

Similarly, where many critics of AA simply dismiss the spiritual component of addiction altogether, more moderate critics like Maia Szalavitz advance a plausible argument for separating addiction’s medical aspects from its spiritual aspects. Noting that at least 80 percent of the treatment programs for drug and alcohol abuse in the United States are built around the AA twelve-step approach, she proposes instead that we think about treatment for addiction “in the same way we view cancer care. Your support group isn’t your oncologist. Each can play an important role in your well-being and survival, but cancer patients aren’t experts in oncology just because they’ve had the disease.” It’s a fair point.

At the other end of the spectrum, many devoutly religious non-addicts have asked a question about twelve-step recovery that’s also come up in some of the readers’ comments at the Mosaic website: why does an addict need this man-made system when our divinely revealed religious traditions have within them all of the resources an addict would need?

The problem, however, for the addict caught in “psychic entropy” (McHugh) or in the “emergency of addiction” (Caldwell) is that in this spiritual condition, he is prone to misuse or misinterpret the teachings of those same religious traditions. As a religious addict once put it to me, the Big Book of AA translates the basics of spirituality into a language he can understand. Those “basics” were embedded in his religious tradition—he knew all the words—but he didn’t really grasp them in a way that could make them active in his life. Bill Wilson’s genius was to create an act of translation that is not so much a watering-down of the great religious traditions as, for at least some people, a prerequisite to a serious engagement with them.

Speaking of religion: Tevi Troy ably extends my argument into the second octave of specific Jewish religious observances: daily prayer, the Sabbath, and other practices that offer the participant the opportunity to unplug—from, in particular, enslavement to electronic devices. All of these are reinforced, Troy notes, by the self-disciplining ethos that is inherent in Jewish living.

True enough. But, as Troy concedes, some Jews who exhibit admirable self-discipline in many other parts of their lives have proved unable to resist the temptation of their smartphones and now observe a corner-cutting “half-shabbat”—“a neat illustration,” as he writes, “of the intensity of their problem.” In the same realm of contemporary paradoxes, Troy also calls attention to the exquisite irony of summoning from that selfsame device the text of one’s daily prayers.

And speaking of prayer: the first prayer a Jew says each day is modeh ani, typically translated as “I give thanks” or “I am grateful.” Rabbi Shais Taub has suggested that the deeper meaning is “I admit” or “I acknowledge.” As he explicates the meaning:

I admit that I did not put myself here; I did not create my own life; I am not an existence apart from God but an extension of Him, very much dependent upon Him in every way and at all times. Because I admit this, therefore I am grateful.

Rabbi Taub also notes that the Hebrew word for Jew—yehudi—is built from the same root and on the same idea. In other words: whatever else the Jewish people are destined to teach the world, the most basic lesson is that man is not self-sufficient. In a final exquisite irony, it is the addict—and remember, no one deliberately sets out to become an addict—who most forcefully reminds us of this lesson.

Addicts Do Need to Get Right with God, but That Doesn't Mean They Need Religion
1. Essay

Why There Is No Secular Substitute for Alcoholics Anonymous
3. Response

Challenging the Theophobia of Many Contemporary Social Scientists and Experts on Addiction
4. Response