Israel Shouldn't Draw Fixed Lines Between Itself and China

The Jewish state’s relationship with the U.S. is stronger for resting on an informal basis; replacing it with a formal alliance would do no good and only anger the world’s other major power. 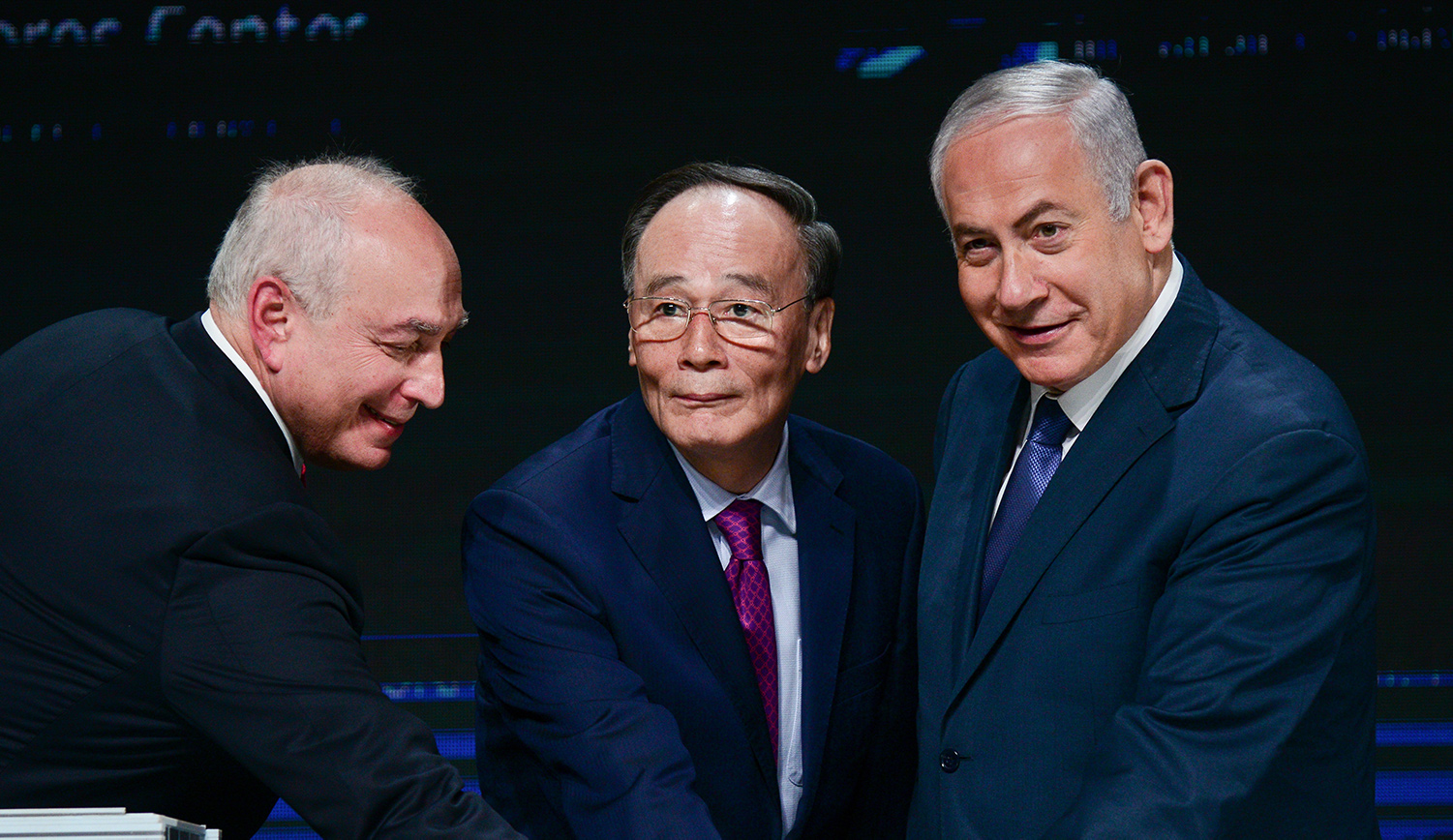 Arthur Herman has once again made a major contribution to an ongoing debate over the future of the U.S.-Israel-China triangle. His latest essay in Mosaic, “The Impasse Obstructing U.S.-Israel Relations, and How to Remedy It,” is sobering, thought-provoking, and profound—and, ultimately, a hopeful take on the future of U.S.-Israel relations. It also reflects his cogent argument that the U.S. must now be as alert to the challenges ahead, and specifically the challenges posed by Chinese ambitions, as Israel has always been forced to be alert in its own hostile geostrategic environment.

Indeed, Herman goes so far as to offer a grand vision of Israel becoming America’s main ally in the battle to retain an edge over China’s “weaponization” of new technologies and fields of knowledge like artificial intelligence (AI), quantum computing, and cyber warfare.

But can Israel fill the role he has assigned to it?

In the year since my exchange with Herman following his previous Mosaic essay on this subject, much has changed. Clearly, some of the most acute American concerns about Israeli policy, and the focal point of his own admonitions last year—including warnings over Chinese involvement in port construction in Haifa harbor, and the lack of an Israeli equivalent of CFIUS (the American agency mandated to approve or reject foreign investments)—have been allayed in recent months. In Jerusalem, the security cabinet met for long sessions to discuss Washington’s concerns and to craft an appropriate response in these cases and others. Reforms have been made, oversight commissions created, explanations given and received.

In his current essay, Herman still sees fit to remind us, with regard to Israeli wrongdoings, of some more longstanding American complaints, whether legitimate or sometimes rooted (as he stipulates) in misperception or outright bias. But, in a twist, he also offers a policy suggestion for a hopeful way forward. To resolve both current tensions and the vestiges of past ones, he proposes the drafting and implementation of a Defense Trade Cooperation Treaty (DTCT) similar to the two already in existence between the U.S. and, respectively, the UK and Australia.

As he explains, this would not be a defense treaty, proposals for which are currently being advanced by others both in Israel and in the U.S. A DTCT is a different, much more flexible, and much more restricted instrument, and indeed would appear to offer decided benefits to both parties.

Still, the question arises: is this the proper vehicle for the purpose? The answer, I believe, is: case not proved.

Herman’s conception of Israel as a vital strategic partner for the U.S. in the turbulent era ahead is certainly of great merit. He is also right to stress those recent aspects of Chinese conduct, from Hong Kong to Xinjiang, that once again vindicate, by contrast, the commonality of values central to Israel’s truly special relationship with the United States (as well as, increasingly, with India—albeit at a different level of importance). If forced to make a choice, there can be no question as to Israel’s allegiance.

But does Israel always agree that every gain by China should be construed as a setback for the U.S. (and vice-versa)? Moreover, does Israel wish to be perceived by others as the key to whatever strategic countermeasures America sees fit to deploy?

Already in the early days of the cold war, there was no question as to where Israel stood; in June 1950, when, backed by Moscow, Kim Il-Sung’s troops invaded South Korea, Prime Minster David Ben-Gurion formally positioned Israel on the side of President Harry Truman. Even so, however, Israel did not wish to be perceived as an active enemy of the Soviet Union. It was Moscow, for its own reasons, that chose to go after Israel (and the Jews), including by courting radical Arab nationalists and orchestrating vicious propaganda campaigns against Zionism both at home and in international bodies abroad, preeminently among them the United Nations.

The People’s Republic of China has displayed no such urges (yet?). In the Middle East, its most significant friends are not the Iranians, although Beijing does work with them to some extent, but rather the countries in the Gulf as well as Egypt: parties with whom Israel, too, now shares a strategic commonality. There is a growing realization in China that the old dichotomy of Israel vs. “the Arabs” is no longer relevant.

In these circumstances, one may question whether it is necessarily in Israel’s interest, when the highest priority is its survival in a region increasingly destabilized by Iran, to goad China, a not-actively-hostile major power, into viewing it as a threat—unless it absolutely has to.

And that’s not all. As I pointed out in our exchange last year, Israel already contributes significantly toward enabling nations in Asia to build up their military capacities as a counterbalance to Chinese power. To go the extra mile by positioning ourselves as America’s formal ally in an enterprise defined almost explicitly as anti-China could bring upon us difficulties far outweighing the potential gains for either Jerusalem or Washington.

The UK and Australia, for their part, are already formal allies of the U.S., bound by treaty obligations. By contrast, the special U.S.-Israel relationship has been and remains all the stronger for resting on an informal moral and ideological understanding and sense of mutual obligation. How would it serve Israel’s (or America’s) best interests for this to be replaced by a binding text—and one needing to undergo a possibly lengthy ratification process in the Senate—especially when much of what a DTCT is projected to achieve is already implicit in existing arrangements, and when the spirit of cooperation it is meant to generate is already enshrined in the Congressional Strategic Partnership Act legislation passed exactly five years ago?

This brings us to the special case of technologies like cyber and AI, which straddle the murky borderline between legitimate civilian use and military application: a matter on which both Jerusalem and Washington are rightly deeply concerned and over which a fair degree of tension exists. Again, however, that tension cannot be resolved effectively by subjecting trade in this area to the workings of a formal treaty, even one as circumscribed in its purposes as a DTCT.

Nor, in such matters, does Israel need admonitions from the U.S. It is very keenly aware of the dangers involved, and has been for some time. Indeed, unlike the U.S., if one may say so, Israel has never suffered from the illusion that one could prevent certain technological developments (like methods of encryption) from seeping into the public domain. Having long since begun to prepare for “the day after,” the relevant Israeli bodies, including the intensely focused national cyber agency, would be quite ready to help the U.S. get up to speed in the face of these radically disruptive forces.

This does not require a DTCT. To the contrary, a system of DTCTs to prevent the spread of the inevitable would be doomed to failure, formal treaty or no formal treaty. What we need to do in a fast-changing world is to prepare together, in close dialogue. Arthur Herman is absolutely right to regard this as an opportunity for a renewed commitment to such cooperation. But a binding document would likely only impede the work.

Today, without such a binding document, more and more joint ventures are now emerging between Israeli and American defense industries. Which is not to say, however, that the needed degree of trust between the parties is there, or that it can be built overnight. One shouldn’t underestimate the inevitable fears that tend to arise in certain American circles when contemplating the sheer size and reach of Israeli defense industries.

Herman attributes such lingering fears, or distrust, to incidents like the Jonathan Pollard affair or the crisis engendered in the early 2000s by Israel’s planned sale to China of components for the unmanned “Harpy” aerial anti-radar system. But these long-ago missteps were corrected, and in any case they were not structural in nature.

Of deeper import, as Herman himself explains, is that in order to sustain the IDF’s edge, Israel’s defense industries must maintain and expand their present scale of operation. In doing so, almost by definition, they are bound to compete occasionally with major U.S. industries for their share of the global market.

But here once more a DTCT is likelier to exacerbate than to dissolve tensions. Israel has already forfeited billions in lost opportunities by refraining from doing military business of any sort with China over the last two decades. Giving U.S. industries still greater leverage over Israeli decisions than the U.S. already exercises is not a recipe for cooperation—to put it mildly.

Eli Spitzer
December
The Impasse Obstructing U.S.-Israel Relations, and How to Remedy It
2. Response

Israel Shouldn't Draw Fixed Lines Between Itself and China
1. Essay

The Impasse Obstructing U.S.-Israel Relations, and How to Remedy It
3. Response

How to Reframe the American-Israeli Alliance in a New Age of Great-Power Competition
4. Response

Israel Is a Tech Superpower, and America Needs It on Its Side
5. Response